Corn. Wheat. Rye. Timber. At the corner of Poquonock Avenue and East Street, this is where residents of Windsor and the surrounding area brought their grain, logs, and tools for grinding, sawing, and sharpening for over 300 years. The historic marker at this site credits Rev. John Warham with establishing what may have been the first grist mill in Connecticut. Due to his status as the fledgling town’s first minister, by 1640 he had been accorded grants of prime land that included property on both sides of Mill Brook and the right to a toll or payment of one sixteenth of the grain and corn ground at the mill. The miller was also entitled to a toll. Various millers operated “Warham’s Mill” including Robert Howard in the 1650s, Peter Brown in 1658, and a long succession of proprietors during the next century and a half. 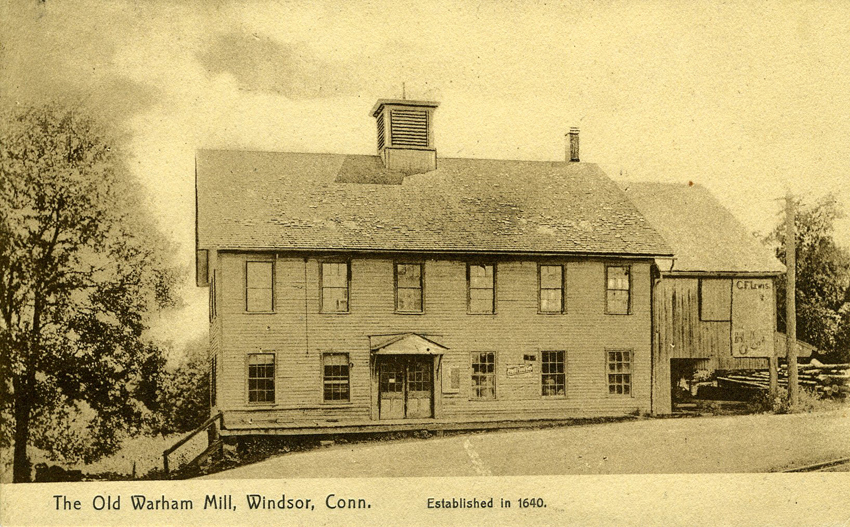 By the 19th century this valuable property was owned by Col. James Loomis, farmer, merchant, miller, and father of the five siblings who founded and endowed today’s Loomis Chaffee School. When Col. Loomis passed away in 1862, Earl Simons purchased the property from his estate and a new era for the mill began. Simons tore down the old mill, and it is said that he used some of the timbers to erect the earliest part of the building that currently stands on the site. The mill pond was on the west side of the road to Poquonock. Several gates controlled the flow of water down the sluiceway that ran under the roadway, through large bricked arches, and into the basement of the mill building to turn the wooden water wheel. Simons operated the new grist mill and sold grain, feed, and flour until he passed away in 1877.

The Lewis family took charge of the mill in January 1878. Charles F. Lewis, a Civil War veteran and expert sawyer, came to Windsor. In the next few years he enlarged the building, remodeled and installed new machinery, and added the sawmill in a shed on the south side. He also spent considerable time and money rebuilding the mill pond dam and sluice gates, only to be disappointed when these gave way due to high water in the spring of 1887. Within two weeks he was rebuilding the sluiceway and stone walls with help from his friends. After operating the mills for 36 years, Charles F. Lewis retired and his son Charles T. Lewis took over the business. Severe flooding damaged the dam and mill again in October 1916, so Charles T. took the opportunity to make significant improvements. He removed the undershot water wheel and installed a Westinghouse electric motor to grind corn, rye, and graham flours. He specialized in poultry supplies, sold “the best” Minnesota wheat flour, and involved his two sons in the business until selling out in 1924. 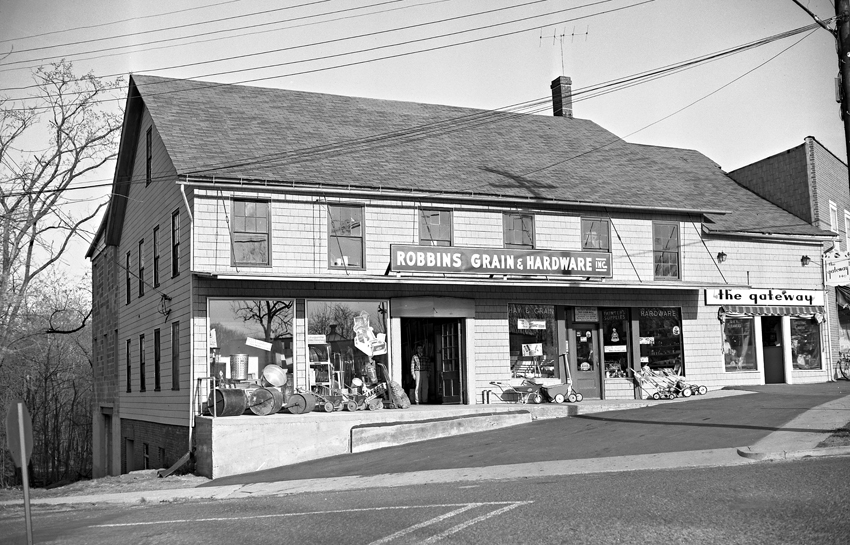 By this time Windsor had a variety of manufacturing industries, although many in town were still engaged in agricultural pursuits raising tobacco, dairy and hogs, and commercial flower and vegetable gardening. By 1929 Farmers Grain & Supply Company had broadened the scope of the Poquonock Ave. business to include seeds and fertilizers, poultry remedies, roofing paper, and sewer pipe. Subsequently Raymond W. Robbins operated the grain and hardware store from the 1940s until well into the 1960s. Early in his tenancy an addition was put on the south side which still houses a meat market and quick-stop grocery store.

In the late 1960s the business was taken over by the Larsen family. They modernized the appearance of the building by installing large plate glass windows on the first floor, removing the cupola, and constructing an addition on the back. Larsen’s Hardware sharpened tools, repaired equipment, hatched chicks, and provided the services of a general purpose hardware store. The three generations of the Larsen family bring the story of the businesses on this site up to the present day. Across the road the mill pond, its dam and sluiceway are gone, victims of changes in technology and the creation of the Millbrook golf course. But inside the Warham’s Mill building one can still see remnants of the grist mill gear work, wooden grain chutes, and a large screened barrel formerly used to sift chaff and dust from the good ground meal. A quotation from yelp.com offers an apt description: “it feels like you are stepping back into time when you walk in here” — and you are.

Warham’s Mill Update
We received this letter not long after the June 2014 Newsletter was published and extend our thanks to its author for providing additional information about the history of the historic property at the corner of Poquonock Avenue and East Street.

In your story on Warham’s Mill (June issue), I note a gap from the mid-twenties until the mid-forties. During those years the business was owned and operated by Mr. Waldo Everett. His son-in-law, Edwin Lodge, joined him there in the early thirties and in addition to farm supplies, they expanded into home heating oil.

In 1940 Ed Lodge, a member of the National Guard, was called into Federal service and, as I recall, by war’s end he was a Major or Lt. Colonel and, with his wife Olive Everett, relocated away from Windsor.

Mr. Everett and his wife, Winnifred, spent their retirement years in their home at 8 Remington Road, next door to my family’s home at 6 Remington Road. As a boy, I was well acquainted with the Everetts. I remember Mr. E. as a very pleasant, kind old man. Mrs. E. was pleasant enough, but used to get somewhat upset as my brother and I and our friends were continually chasing lost balls, model airplanes, etc. from our back yard onto her flower gardens.