The Howard Family in Quarantine

Ann Howard as played by actor Susan Bucholz. Mrs. Howard was in charge of care for her husband and four sons while they all convalesced in a secluded cottage after contracting smallpox. Photo by George Petro.

In light of the recent COVID-19 pandemic, we’ve been hearing the word “quarantine” often these days. Quarantine has been practiced for centuries. It was used to prevent the spread of disease even before modern germ theory was accepted. According to the Center for Disease Control, quarantine as we know it was first used in the 14th century
when the city of Venice, hoping to avoid plague epidemics, required arriving ships to remain anchored off shore for 40 days prior to making land.

Both families who lived in the Society’s two historic houses were involved in a quarantine situation in the late 1700s. Captain Nathaniel Howard and his family, under the care of Doctor Hezekiah Chaffee Sr., were quarantined for smallpox around 1787, when the Howards’ youngest son George was still an infant. Capt. Howard caught smallpox on a voyage to London, and in order to prevent him from spreading the disease throughout Windsor, Dr. Chaffee arranged for he and his family to be isolated in the “secluded cottage” of Gaylord and Abigail Denslow. At the time, smallpox was a fearsome and deadly disease across the globe. 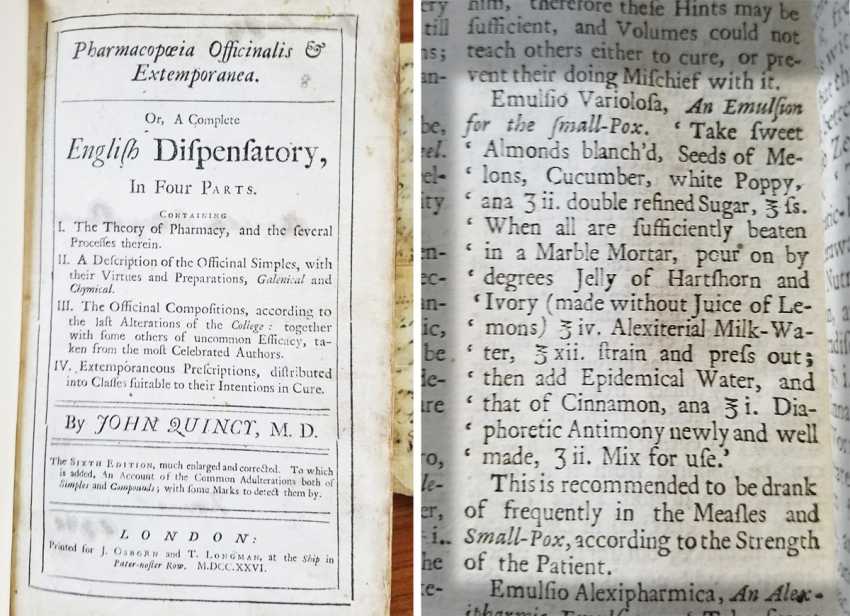 Smallpox treatment from John Quincy’s English Dispensatory, a book Dr. Chaffee would have had access to in his medical practice.

During the Howards’ time in quarantine, smallpox infected not only Capt. Howard, but also all four of his sons. The care for all of them fell squarely on the shoulders of Mrs. Ann Howard, who for the remainder of her life, spoke often of the “sufferings and sorrows” of the “Straw beds, foul linnon [sic], hard work, and constant watching” she endured during the family’s isolation.

Ann Howard also remembered with distaste the family’s limited diet while in isolation. George later recounted this in a memoir: “Hasty pudding, sage tea sweetened with molasses, no bread, no butter, no salt, roast potatoes was our
constant bill of fare.” Thankfully, Ann’s hard work and sacrifice paid off. The whole family recovered and was “once more let loose upon the world’s commons.” Windsor did not experience a smallpox epidemic at that time. 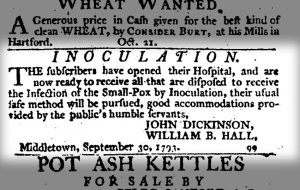 Eventually, through efforts credited largely to British physician Edward Jenner, vaccines were developed, first using live smallpox variola, then cowpox, and later using modern vaccines. Some physicians in this region advertised early forms of inoculation in the Hartford Courant in the late 1700s, and these would have been options available to Windsor residents.

We do not have any evidence to give us insight into Dr. Chaffee’s views on inoculation. Of the medical books available to him during his lifetime, some suggested treating smallpox with infusions made from almonds, melon seeds, and other ingredients, while others described the process of inoculation, which was still in its infancy. Due to the success of smallpox vaccines, the World Health Organization was able to announce that smallpox had been officially eliminated on May 8, 1980.