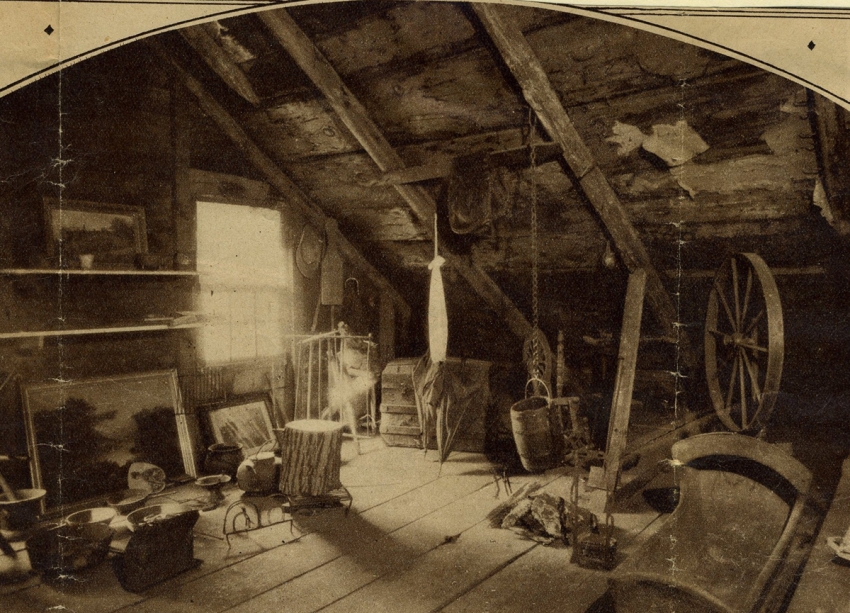 A view of the Strong-Howard House attic in 1931. Courtesy of the Hartford Courant.

Back in November of 2012, Windsor Historical Society’s former curator, Christina Vida, was preparing the Strong-Howard House for an ambitious reinterpretation. One of the many initial steps in implementing the project was to clean out the house, including its second floor which had been used as storage space. The Society hosted a community cleanup event where numerous volunteers helped in the process. During this seemingly routine cleanup, they made two unique discoveries.

First, they found an early twentieth-century tetrachloride fire extinguisher in the house. These early extinguishers were thrown at the fire like a grenade and used a powerful chemical that is also extremely poisonous. Christina quickly handed over the fire extinguisher to the police for proper disposal.

The second major discovery of the day happened when one of the volunteers came across a rare artifact that had long been tucked out of sight behind a shelving unit. Although it was wrapped in plastic, it was immediately apparent that the object was a rifle. Christina quickly discerned that this rifle was an M1918 Browning Automatic Rifle (BAR).

The Browning Automatic Rifle was used as a light machine gun by the American military from 1918 through the early 1960s. WHS collections 2012.1.99. All remaining photos by Christina Vida.

The M1918 BAR was developed alongside the M1917 Browning machine gun during the United States’ entry into the First World War. Both weapons were meant to supplement the meager supply of outdated machine guns stockpiled by the U.S. Army before the start of the war. While Browning designed its M1917 machine gun as a traditional immobile machine gun, like the majority of those used at the outbreak of the war, the BAR was developed with a newer, light machine gun design. The intention was to use the rifle for walking or marching fire, where soldiers would maintain suppressing fire on the enemy while simultaneously crossing the no man’s land between the trenches. 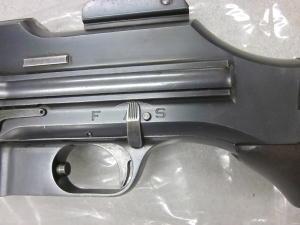 The mechanism above the trigger allowed the BAR to switch between automatic and semi-automatic fire. Theoretically this meant that the BAR could take on the roles of both a machine gun and a traditional rifle.

The concept of combining the firepower of a machine gun with the portability of a rifle was just materializing during the First World War. The widespread use of stationary machine guns during the war had brought all strategic advances to a standstill and armies on both sides desperately sought a means to gain an upper hand and re-mobilize their offensive capabilities. Portable machine guns operated by a single soldier were one of the many technologies implemented to achieve this goal. Even though the new BAR was still relatively heavy at fifteen pounds and could only hold twenty rounds in a clip, its design was cutting edge for the time. Despite its innovative nature, the BAR’s deployment and effectiveness were both limited during World War I, which ended only months after the rifle’s deployment in combat. However, during World War II the BAR was recommissioned as the M1918A2. It ended up proving itself as a versatile and dependable weapon amongst American troops deployed in both the Pacific and Europe. 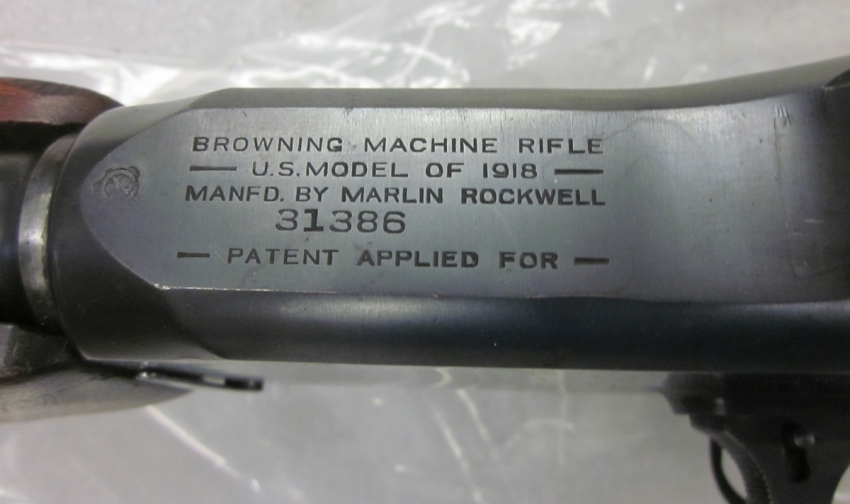 Browning contracted production of the BAR out to other Connecticut arms manufacturers, such as Marlin Rockwell, in order to meet the production demands of World War I.

Through the course of her inspection and research, Christina found that Windsor Historical Society’s newly discovered BAR was unregistered and an especially rare model. North Haven’s Marlin Rockwell Firearms Company had produced this specific model of the rifle during World War I. From June of 1918 through the end of the war Marlin Rockwell built 20,000 BARs under contract for Browning, a deal necessitated by the strain that increased military supply demands had placed on Browning’s own facilities. The military kept these rifles in storage, upgrading and reusing them during World War II, with some possibly still being in service as late as the Korean War and during the early stages of the Vietnam War before the M60 machine gun replaced the BAR’s role. Most of these rifles had been scrapped when they were taken out of service; and there are currently so few still in existence, that a model with mostly original parts can take in up to $40,000 in an auction. Unfortunately without proper registration and a record of the donation, we could not sell the rifle at auction. 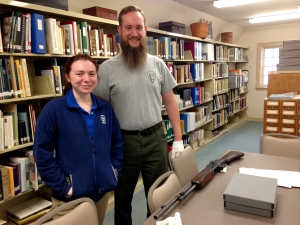 Over the course of three years, Christina searched for documentation on the BAR in the numerous binders that the Society had used to record donations before the advent of digital cataloging. Because the rifle itself contained no markings or tags with accession information, Christina had to search every page of every binder, hoping to run across its entry. Despite her prolonged effort, she never found any documented record of the rifle. This meant that Windsor Historical Society could not legally keep the BAR. Christina found that only two nearby institutions, the Connecticut State Library and the Springfield Armory, were licensed to store and display the weapon under these circumstances. In the end, it was the Springfield Armory that expressed interest in the rifle. The Armory’s curator, Alex MacKenzie, pictured here, visited WHS and transported the rifle to Springfield on October 21, 2015, ending the Society’s long saga with the BAR. The Springfield Armory subsequently had the rifle properly conserved and it is now a part of their permanent collection.