Connecticut Valley Furniture by Eliphalet Chapin and His Contemporaries, 1750-1800 was a groundbreaking exhibition on view at the Concord Museum in Concord, MA and the Connecticut Historical Society Museum in 2005 and 2006. Accompanied by a 550-page book of the same name, published by the CHSM, it focused on the amazingly rich and innovative designs that defined the work of the valley’s cabinetmakers. Within a twenty-mile radius of Hartford there were not one, but three major furniture styles originating around Wethersfield, Colchester, and East Windsor, each with its own character.

The town of Windsor is central to this flowering for several reasons: the early establishment of a strong regional craft tradition in the 17th century; experimentation with new forms by local cabinetmakers during the transition into the Queen Anne period; and major participation in the Wethersfield style during the mid-18th century.

The beginning of Windsor’s woodworking story was revealed in the exhaustive scholarship of Joshua W. Lane and Donald P. White, III. The brilliant carved joined oak chests and boxes exhibited in Woodworkers of Windsor, seen at the Windsor Historical Society in 2003, brought much deserved attention to the town’s role in furniture production in the decades following settlement in 1635. This tradition imposed high technical standards, even as it fostered innovation.

By about 1730 the popularity of the carved “Hadley” and “sunflower” chests was waning and the new, lighter, Queen Anne furniture was gaining favor throughout New England. Windsor cabinetmakers responded by producing high chests and dressing tables of two distinct, if short-lived, variants. One model, bearing dates in the late 1730s, has exaggerated cabriole legs and painted decoration simulating Boston-area japanning. The other, unique to Windsor, has figured maple facades, painted banding on the drawer-fronts, and tall spindly legs on tiny pad feet supported on turned spools (Fig. 1).

About 1745 William Manley (1703-1789), a Charlestown, Mass. native who had spent fifteen years in Wethersfield, moved to Windsor’s Wintonbury parish where he set up shop and began producing furniture in the mature Queen Anne style. Now called the Wethersfield style, this became the standard throughout the region between Suffield and Middletown (see Fig. 2). Distinguished by long, graceful cabriole legs, cyma curved front and side aprons, and clean surfaces with restrained carved shells, the style was refined over a long period, culminating in the 1780s and 90s.

Timothy Loomis, III (1724-1786) has been identified by William N. Hosley, Jr. as a central figure in Windsor’s interpretation of the Queen Anne style. A third-generation woodworker, Loomis may have worked for a time in William Manley’s shop. A dated 1760 high chest discovered by Hosley, its two parts separated, is virtually indistinguishable from contemporary Wethersfield work (Fig. 3).

Loomis is also credited with making numerous clock cases, not only for Windsor clockmaker Seth Youngs (1711-1761), but also for Timothy Cheney (1731-1795) of East Hartford, and patrons such as Samuel Talcott of Hartford (1710-1797) who chose clockworks made in London for his locally-made case (Fig. 4).

In 1771 Eliphalet Chapin (1741-1807) opened his shop on East Windsor’s Main Street where he remained until 1797. He had spent four years as a journeyman in Philadelphia fleeing a paternity suit before bringing back his unique abstracted Connecticut version of Philadelphia rococo furniture designs which coexisted and competed with the prevailing Queen Anne style. He gained a reputation for fastidious craftsmanship that endures to the present day. 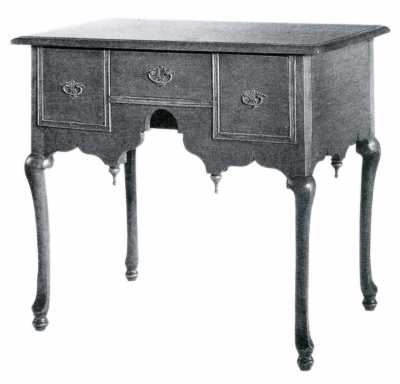 Fig. 1 – Dressing table, probably Windsor, c. 1740-50. Maple with eastern white pine and yellow pine, with a history of ownership in the Ellsworth family. The legs and feet of this dressing table are typical of a group identified as the “spool-foot group.” Privately owned. 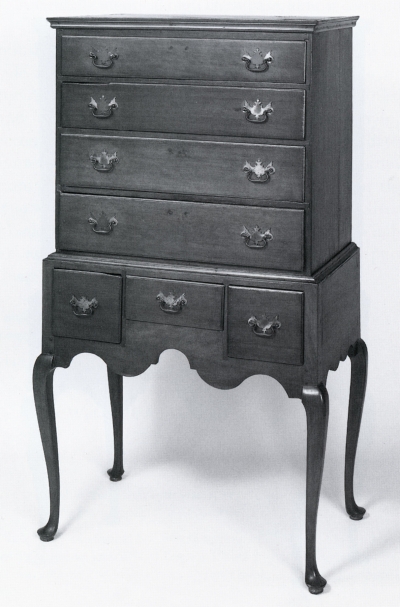 Fig. 2 – High chest, possibly by William Manley, probably Windsor, c. 1745-60. Cherry, with eastern white pine and tulip poplar. Owned by the Wilson and Phelps families, this high chest may be one of the earliest examples of a Wethersfield style high chest made in Windsor. 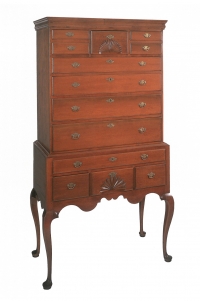 Fig. 4 – Clock case, probably by Timothy Loomis, III, Windsor, ca. 1760-70, mahogany with eastern white pine and yellow pine. One of a half dozen similar clock cases outfitted with works by different makers, this clock was originally owned by Ebenezer Grant (1706-97) of East Windsor. The present works are replaced. Privately owned.