If you were reading the Windsor Herald sometime in the mid-1920s, you might have seen an ad for the Betsy Kob Tea Room and Gift Shop in the Fyler Homestead. Tea rooms were popular American eateries during the 1920s and 1930s. They existed in rural and urban areas and were decorated with simple furniture, spinning wheels, and colonial antiques. Many of these tea rooms set up shop in historic homes, abandoned farm houses, stables, or empty store fronts. Windsor Historical Society ran the Betsy Kob Tea Room from September 1925 through September of 1928 in the then-newly purchased Fyler House (today called the Strong-Howard House). In 1925 Society president George E. Crosby announced that the tea room “and its delightful decorations, displays, and furnishing have already made it pleasantly known to visitors from every part of the country.”

Why did we create a tea room within our historic house? Its main objective was to earn a profit to help pay for repairs and restorations in the Strong-Howard House. The Society also hoped that the tea room would create a specific atmosphere for its guests. WHS’s 1925 annual report states that the Society was “determined to operate the homestead in part as a tea room in order to give greater reality to the idea of making it a home and a self-supporting one.” 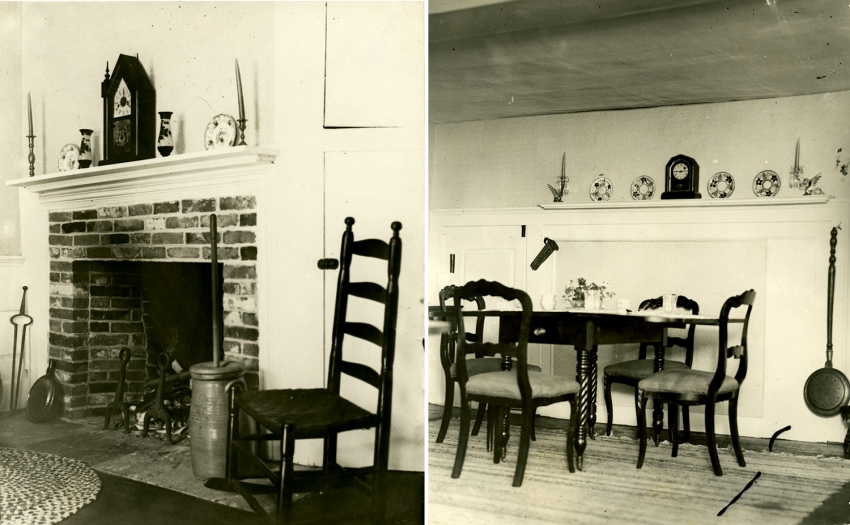 The dining and keeping rooms of the Strong-Howard House (then known as the Fyler House), as they were used in 1925 for the Betsy Kob Tea Room. WHS collections 1944.2.1, gift of Emma H. Chamberlin. Photos by John Farnum for the Springfield Republican.

At the time, the Society believed that the house was the only surviving building from the town’s earliest settlement and felt that it belonged to all of the descendants of those first settlers. They hoped that the tea room would attract hungry patrons and create a home-like atmosphere for Windsorites visiting “their” historic house.

WHS hired two women from New York City, Elizabeth Kob and Josephine Hughes, to run the tea room. Elizabeth, or Betsy, lived in the house, which was open for the spring and summer. Tea room guests, primarily adult women, could make reservations with Betsy Kob or just drop in to enjoy a cup of tea, baked goods, or lunch. Diners ate in the house’s beam room and south room (now called the keeping room and dining room), and on the porch in hot weather. The tea room’s antique tables and place settings complemented the house’s colonial décor, and guests could purchase sets of the tea room’s china from the Society’s gift shop. Miss Kob provided interested patrons with free tours, including of the Society’s headquarters in the front parlor and two upstairs bedrooms. 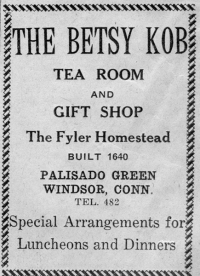 Betsy Kob competed with several other Windsor tea rooms, including the Well Sweep Tea room on Windsor Avenue, the Blue Shingle on Palisado Avenue, and the Coffee Pot Lunch Room in the Windsor Post Office building (as of 2019, home of the Bean @ 226). G. Fox, Hartford’s popular department store, ran another trendy tea room only a short train ride from Windsor. Other New England historical societies also offered tea rooms in their historic homes. The Colonial Dames of Connecticut opened a tea room in the Webb House in Wethersfield, CT, and Caroline Emmerton opened a tea room in The House of Seven Gables in Salem, MA.

Although the Society advertised the Betsy Kob Tea Room with a colorful sign, newspaper advertisements, and postcard mailings, it closed after the 1928 season. Competition and lack of profit contributed to the tea room’s demise. A national decline in tea room popularity and the Society’s historical interpretation of the Strong-Howard House may have also made the enterprise less appealing.

In his 1928 report to the Board, President Crosby admitted, “however charming a feature of our headquarters the tea room has been, any attempt to commercialize a spot dedicated to memories and hospitality, is foredoomed to failure.” After the tea room closed, the Society focused its attention on restoring the house’s historic architecture and erasing any trace of its entrepreneurial past.