It is always a pleasure for a historian or genealogist to find documents that add color and dimension to the individuals and communities being studied and that fill in the gaps between the official records. The Filley Records are such a document.

Between December 1781 and May 1884, Horace (1779-1857), Horace H. (1809-1884), and William H. Filley (1844-1919), three generations of the Filley family in Windsor, Connecticut, are credited with keeping a necrology, a chronological record of those who died in their community. Windsor’s Abigail Wolcott Ellsworth Chapter of the Daughters of the American Revolution (DAR) donated the original manuscript to the Connecticut State Library in 1929, and at the time the state librarian, George S. Godard, remarked that:

Also in 1929 the Abigail Wolcott Ellsworth DAR Chapter published a book cataloging the epitaphs on the gravestones in five of Windsor’s cemeteries, called Cemetery Inscriptions in Windsor Connecticut. Their motivation was their “need of reliable genealogical data to verify the claims of those seeking membership. This need led [the organization] to recognize that data nowhere else to be found is recorded on the stones in our cemeteries […] and that these records are melting away as the older stones crumble.”

Around the same time, Katherine Barker Drake, a member of the Windsor DAR, copied the Filley Records from the original manuscript. She took efforts to capture original spelling, capitalization, and order as they were originally written. The Chapter included her transcription as an appendix in Cemetery Inscriptions. 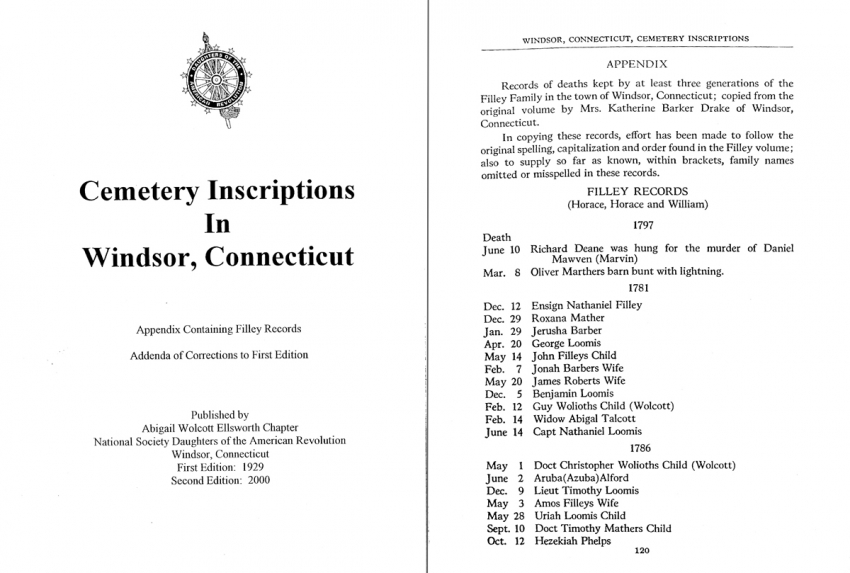 While many of the entries contain only the name and date, others offer a richness of detail that may include age, race, and cause, circumstances, and place of death. When the Filley Records are used alongside other resources, a researcher can draw a broader picture of individuals, their lives, and circumstances.

Stitching Together a Story

Horace Filley started recording town deaths at the age of 18. Perhaps his first entry was powerful enough to motivate him to undertake the project:

After two entries in 1797, Horace appears to have gone back and written down select earlier deaths, organized by year but not yet in chronological order within the years. He lists eleven deaths in 1781, then seven in 1786. He skips a couple other years, and there is not much out of the ordinary until we get to:

Presumably Katherine Barker Drake added the note in parentheses, which for other entries are usually spelling corrections or first names that the Filleys omitted. A page from a First Church of Windsor record book gives us a bit more detail and informs us that the child was 16 months old. Unfortunately for readers and possible descendants of Selah Sheldon, neither Drake nor the Filley family nor the church record gives any more context, so this tiny morsel is all we know of Daniel Selah’s story. As for Selah Sheldon, a later entry in the Filley Records states: 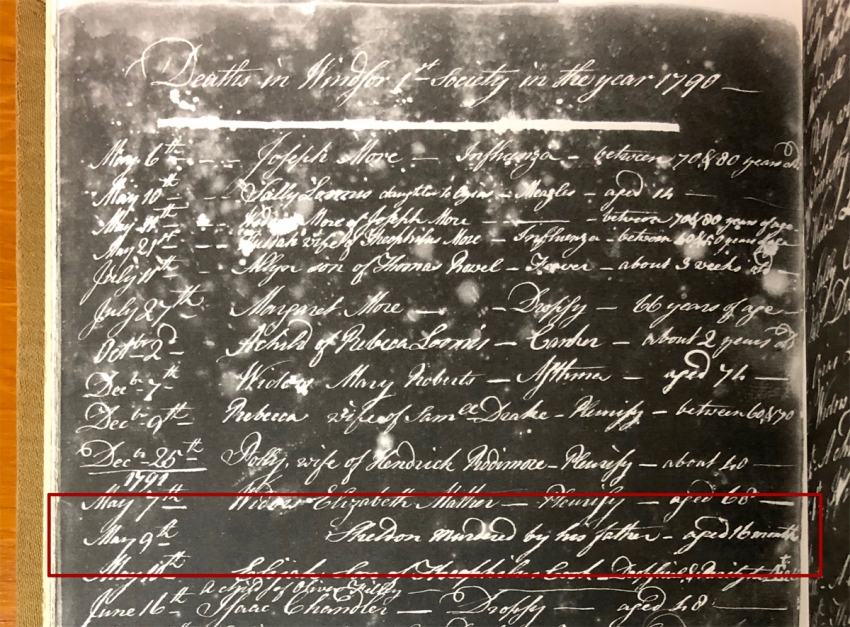 Entry for ” ____ Sheldon” in a list of deaths in Windsor, from a record book for Windsor’s First Congregational Church. Windsor Historical Society collections, Photostat copy of the original, housed at Connecticut State Library.

In subsequent years Horace lists the deaths of widows, children, wives, captains, and doctors, typically only including a name and date. In 1802, he starts more regularly including people’s ages when known. Here are some of the more striking or detailed entries:

Nov. 8, 1793 – James Roberts hung himself on a tree thursday knight

To fill out more of this story, Windsor historian Henry Reed Stiles in his book The History and Genealogies of Ancient Windsor tells us that Lora/Lory Drake was 46 years old and the father of five children when he drowned in a brook on March 29, 1805 (also noted in the First Church record book mentioned earlier). He and his family resided in the southern part of town, in a house he built at what is now 195 Windsor Avenue, which is still standing today. Another secondary source reveals that Drake was a veteran of the Revolutionary War and ran a saw mill a quarter mile from his house in Keney Park. The mill was located on the brook in which he died.

Some of Filley’s descriptions of deaths are unexpectedly grisly, like this one, and many are too tragic to transcribe at length here. It becomes enormously morbid reading death after death, particularly when so many of the names listed were children, in that era when child mortality rates were much higher than today. But also by reading through so many ages and causes of death, by noticing patterns and groups of names, we start to get an idea of the many hardships these people faced, and what kinds of things they would have been dealing with throughout their day-to-day lives.

For instance, a cluster of deaths in the same family in a short period of time might have indicated an outbreak of disease. The many drownings documented leads one to believe that perhaps not many folks knew how to swim, or that the waterways in the area were often fast and fatal. We can imagine not only the potential physical dangers present for the people here, but also the mental and emotional weight they had to carry around from so much tragedy.

Nov. 8, 1831 – Deac.Elijah Mills was suddenly killed by being thrown from a cart with a load of wood goin to Hartford the wheel passed over him caused his death immediately aged 70.

May 13, 1838 – 1836 Charlotte Perkins daughter of William Mack died in East Hartford buried on the 14th.lay in the ground two years six months 8 days then she was dug up and brought to Windsor and buried in this grave yard Nov.22, 1838 agd 30

Charlotte Perkins was actually one of two deceased persons in the necrology who were buried elsewhere, exhumed after a considerable time, and moved to Windsor. This may indicate that this practice, while uncommon, was not unheard of. On the other hand, because Filley specifically noted these events each time, it was likely still an exceptional circumstance when it did happen.

Feb. 11, 1845 – Henry Hidley instantly killed by a train of cars which ran over him he being deaf & dumb Agd supposed to be 35 killed two miles above here brought to the depot

Aug. 9, 1851 – Mr. Aldermans wife killed in the dreadful tornado buried up in the ruins of the whole gable end of the house fell in, age 20.

Her cemetery inscription, which we can read earlier in the DAR book, tells us her name was Emily Y. Aldermann and that she was the wife of John D. Aldermann.

Nancy Toney is buried in Palisado Cemetery. Her gravestone inscription recounts more of her story: “Born a slave to Hezekiah Bradley on Greenfield Hill Conn was for many years in the family of Col James Loomis by whom this monument to her fidelity is erected in 1857.”

Also in 1857 we find the recorder himself:

At this point his son, Horace H., must have picked up this record and he and his son William continued it until Horace H.’s death in 1884.

This family has contributed a gift to genealogists and historians with their conscientious recordkeeping. In chronicling these deaths their efforts illuminate the lives of the people of Windsor in ways that, in some cases, cannot be found anywhere else.

Windsor Historical Society has a copy of an indexed version of the Filley Records within the book Cemetery Inscriptions in Windsor, Connecticut in our library.

By Susan Smoktunowicz, volunteer, and Barbara Goodwin, librarian, 2010; updated by Michelle Tom, librarian/archivist, 2019. Other portions of this article originally appeared in the Windsor Historical Society Newsletter Vol. XI, No. 3, May 1993.