The early morning hours of January 24, 1925 were frigid. Nonetheless, men, women, and children from all over the Windsor area dressed in their warmest clothes to view the long anticipated spectacle: a total eclipse of the sun. Few people were left on the streets as excited crowds gathered on high rooftops in Hartford, on the Connecticut River Bridge, and at Plymouth Meadow Country Club in Windsor Heights in Windsor.

The event would be considered a total eclipse within a narrow 100-mile swath through central Connecticut; north and south of that band the moon would only partially block the light of the sun. Visiting astronomers set up complex viewing and data-collecting stations at Yale, Wesleyan, and Trinity Colleges.

Nearly 1,700 women students from Smith and Mount Holyoke Colleges boarded special trolleys to carry them to the railroad station for their “eclipse expedition” to Windsor. As they disembarked from the train in Windsor Center, crowds gathered on the hill at the fourth and fifth holes on the golf course. The girls were greeted by bonfire, colorful banners, coffee and sandwiches, and Loomis Institute boys. 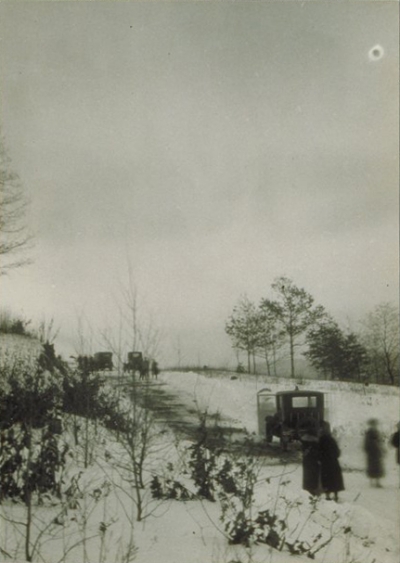 View of the eclipse from Vernon, CT. Inscribed on back: “About 9:15 AM Saturday / January 24 – 1925 / by [illegible] / Fox H[ill] / Rockville / Ct.” Image courtesy of the Connecticut Historical Society Museum and Library and ConnecticutHistoryIllustrated.org.

Although the sun was obscured by thin clouds just before the eclipse was scheduled to start, the skies soon cleared and all the dramatic phases of the eclipse were visible. The spectators were prepared with pieces of smoked glass, exposed film, or special eclipse viewing cards so that they could safely look at the bright sun. At the moment of totality, the halo of the corona appeared. A universal hush fell over the crowd as everyone marveled at the awesome phenomenon in the skies.

The Hartford Times described the scene: “Suddenly a low sibilant ‘Sh-h-h-h-h!’ swept over the assemblage of beautiful female Galileos. Looking over to the west, past the second hole (easy unless you pull your shot), beyond Sage Park, west of the water tower (in Windsor they call it the stand-pipe), one saw the darkness deepen. All was silent, save for a few coughs and an occasional shriek as that ‘spooky’ feeling overcame the scientific spirit in some fair breast…And then there arose the united ‘Ah!’ of science rewarded, as 2,000 girls turned their backs on the advancing shadow and saw their first glimpse of totality with the corona and the whole business, all exactly as advertised.”

The darkness lasted about two minutes, and then a spontaneous and joyful shout erupted as the sun began to peep out again and light was restored.

Soon the fair scientists made their way back to the waiting trains puffing and clacking back and forth on the tracks. Trolleys resumed their schedules, businesses reopened, cars that had pulled off to the side of the road faced temporary traffic jams, and the many employees who had enjoyed a brief respite returned to their work.

Astronomers’ dreams of seeing a total eclipse of the sun under ideal conditions were realized. We are fortunate to have personal, first-hand reports published by Hartford Times journalists, for the eclipse was truly a once-in-a-lifetime experience. The next total solar eclipse in the Windsor area will be in the year 2144 (or 2024, for a view just outside the totality zone).