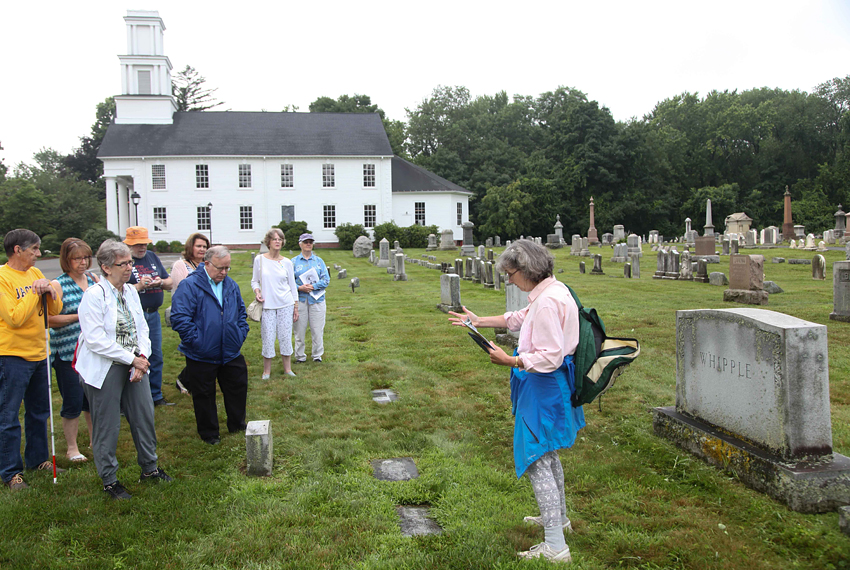 Palisado Cemetery Tour with Emphasis on World War I Stories

World War I was effectively ended on the eleventh hour of the eleventh day of the eleventh month in 1918, one hundred years ago. On Sunday, November 11 at 2 p.m., join Windsor Historical Society’s executive director Christine Ermenc at the entrance of Palisado Cemetery for a tour commemorating Windsor residents who served on World War I’s battlefields and assisted at the home front. Discover the stories of Windsor residents like Harold Loomer who etched the names of all of the bases where he served onto his mess kit. Nearby is the grave marker of Dorothy Clark Hayden who served as a Red Cross nurse, and that of George E. Crosby Jr., who was appointed Director of Liberty Bonds and Thrift Stamps in Windsor during the wartime years.

H. Carleton Chidsey, valedictorian of Windsor High School’s class of 1916 and editor of the Tunxis yearbook, signed up for service and was sent to Fort Monroe in Virginia for training. On October 24, he penned a letter about his journey from Windsor and his first day of camp life. Later in the day, he was stricken with the first symptoms of the deadly Spanish Flu, and died November 1. George H. Glover Campbell did survive the war and came home to a legal practice which included service as Hartford County’s public defender, and Commander of Windsor’s Gray-Dickinson American Legion post. However, he had been severely gassed during the war and never recovered his health. In 1930, he died at the age of 36 years. Honor the memories of these and other Windsor veterans and home front workers by learning their life stories on the 100th anniversary of the armistice that ended land, sea, and air conflicts between Allied forces and Germany.

Join us in hoping for decent weather. A cold steady rain or snow will cancel the tour.