This article was originally published as a chapter from the book The Daughter Towns of Windsor, Connecticut, by Homer W. Scott, 2008. Published by the Descendants of the Founders of Ancient Windsor.

Depending on the criteria used, the number of Ancient Windsor’s Daughter Towns can range from three to 22. If one opts for the most rigorous standard, that a town be a part of Windsor at the time it was set off as a separate town, there are only three: East Windsor (incorporated in 1768), Bloomfield (formerly called Wintonbury, incorporated 1835), and Windsor Locks (incorporated 1854). Ellington (1786) and South Windsor (1845) were parts of East Windsor before they became independent. They might be called daughters as they were part of Ancient Windsor, but we could also call them granddaughters.

In families there are true daughters who share their parents’ genes, also step-daughters and daughters who are adopted. If we use ownership by the town as the standard, we can include Simsbury as a true daughter, even though it was not included within Windsor’s boundaries. Massaco had been deeded to John Griffin. He gave Windsor his deeded rights to it nine years before it was made the town of Simsbury in 1670. Later, Granby was split off from Simsbury in 1786, as was Canton in 1806. Granby lost East Granby in 1858. As these three were not part of Windsor when they were set off, we could call them granddaughters. 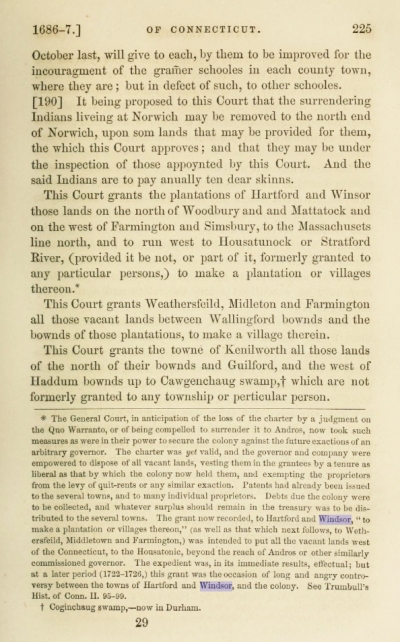 Page from the Colony Records of Connecticut, showing a January 6, 1686 meeting, at which the General Assembly granted Hartford and Windsor land stretching west to the Housatonic River.

Other towns made from land owned by Simsbury are those of the Western, or Waramaug, Reserve which the Connecticut General Assembly gave to Hartford and Windsor in 1686. This was the area to the west of Simsbury and Farmington as far west as the Housatonic River. When, in 1717, some Hartford and Windsor men started a settlement in this western land, the Assembly objected that the 1687 grant had not given them title to the land. After their respective settlement committees deeded Hartford and Windsor their purchase rights from the Indians, the Assembly agreed, in 1719, to grant the two towns a new township called Litchfield. We can call the Windsor share an owned daughter. Litchfield’s southern part was split off in 1859 as Morris, so Morris is a granddaughter.

After considerable negotiation, the Assembly granted Hartford and Windsor the land for seven more townships in the Reserve. In 1732 Windsor received Torrington, Barkhamstead, Colebrook, and half of Harwinton as owned daughter towns.

Sachem Josua Uncas in his 1675 will gave some Hartford and Saybrook men large grants of land east of today’s Manchester. About 1700 the first settlements started there. Windsor’s families had grown, and most of their town’s best lands had been taken. With encouragement from the Town, Windsor men began looking at the eastern plantations. By 1704 some had taken up land in Hebron, by 1713 in Tolland, and by 1716 in Bolton. (In 1715 the Assembly granted a Windsor committee the township of Tolland, but it did not give it to the Town of Windsor. Each settler paid the Assembly £6 for his allotment.) As their numbers in these towns grew, Windsor men became leaders in developing them while maintaining a close association with their home town. Although Windsor did not own these three townships, the number and importance of Windsor families in them lets us say that they were adopted children.

Over the course of years, as town boundaries were changed, parts of Ancient Windsor ended up in abutting towns. By 1670 Windsor claimed the land on both sides of the Connecticut River as far north as Stony Brook in present-day Suffield. This overlapped the claims of Massachusetts towns. As a result of the Connecticut-Massachusetts border adjustment in 1717, Suffield and Enfield each received from Windsor a mile-wide strip along their southern borders. When Somers was split off from Enfield, it contained a portion of Enfield’s Windsor land.

After several attempts, the Orford Parish in East Hartford succeeded in being made the town of Manchester in 1833. There is a triangular sliver of former Windsor land along its northern side. While Suffield, Enfield, Somers, and Manchester each have a little land which once was part of Ancient Windsor, it is a minor part of their townships and Windsor people played little or no part in the organization. We will call these four towns step-children.

To find out in much more detail the reasons for town separations, where boundary lines were originally drawn, and which English people first settled each town, please visit the our research library to read the rest of Homer Scott’s The Daughter Towns of Windsor, Connecticut.