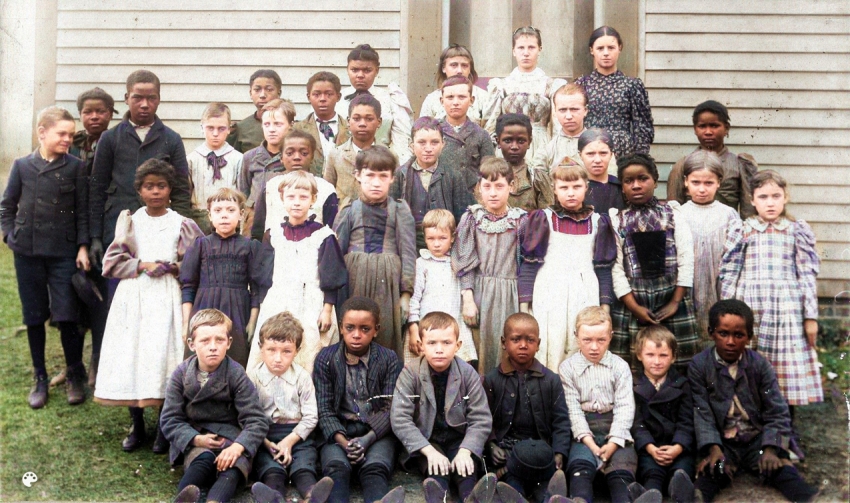 In 1991, Marcia Hinckley interviewed a number of African American and white residents, pored through primary and secondary documents, and wrote her master’s thesis, a panorama of the African American presence in Windsor, Connecticut from 1790 through 1950. Key topics are the ending of slavery in town, geographic location of Black residents, jobs, home ownership, and relationship among Black residents and with the white community. Included are population graphs and an extensive bibliography.

The full text is available in the WHS research library, and for download here. 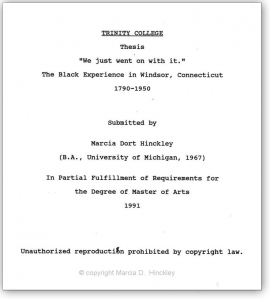 As I wrote at the time, my purpose was ”to study the development of the black community in Windsor, Connecticut; to identify those black individuals and groups who have been part of Windsor’s history; and, though this is not a sociological study, to discover identifiable patterns of relationship among blacks and between blacks and the hegemonic white community.”

Very little research had been done on the history of African Americans in Connecticut at the time of this study. Other than histories of Black Chicago and of Harlem, there were very few models for researching and writing about African Americans, certainly those who lived outside of urban areas. My bibliography lists the few models I could find.

Because there were very few secondary sources about Windsor’s African American history – or even about other Connecticut towns – I decided to cover the extensive time period in order to create a point of reference for future research. It also enabled me to look for patterns that were developed or sustained over time.

There are myriad areas ripe for further research. It has been my hope that other researchers would use my work as a basis for deepening and expanding our knowledge of this oft-overlooked aspect of United States history.

I asked William H. Best, Windsor’s first Black policeman and one of my most valuable sources of information and contacts, what he thought people would say about my doing this, since I am white. “No one else is doing it,” he retorted. Although I was primarily interested in describing the perspective of Windsor’s Black residents and how they experienced life in this town, he later made clear that “You can’t understand what it is like to be black unless you’re black.” 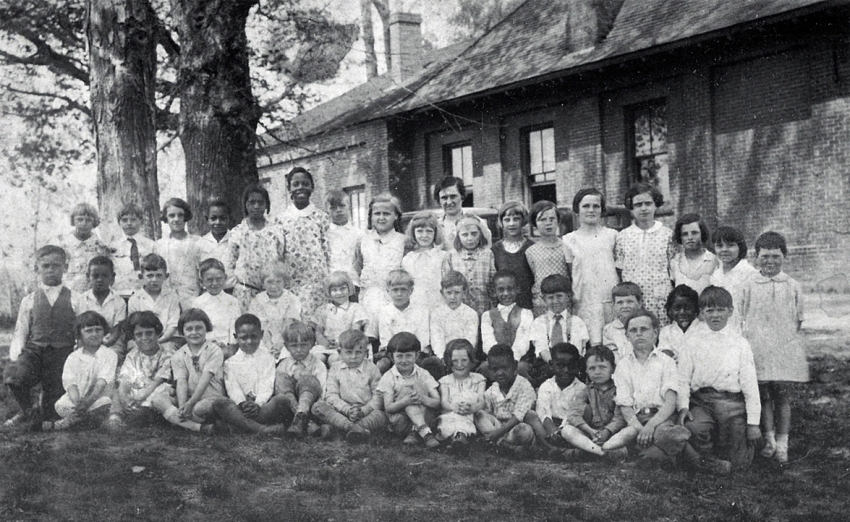 The bulk of the data came from primary sources, including all federal censuses from 1790 through 1950, vital statistics and land records, probate records, church records, city and suburban directories, newspapers, historical maps, and photographs and articles in the Windsor Historical Society archives. However, no single primary source was available for the entire span of my study.

I also relied on a couple of secondary sources for the nineteenth century, especially histories by Jabez Hayden and Henry Reed Stiles. Formal interviews I conducted with past and present Windsor African American and a few white residents informed much of the 20th century data. Population graphs and a map of the town illustrate the numbers of African Americans and African American home ownership statistics and where they lived. An extensive bibliography is included.

Thirty-some years later, I remain humbled and grateful for the tremendous gift I received from all who shared their life stories with me. I have continued to learn over the course of these years, but the education my research and the interviewees provided me is profound and immeasurable. Although I began the project with genuine interest and respect, I gained even greater respect – to the point of awe – for the African Americans and their ability to retain their dignity and grace even within the circumscription and relatively mild oppression in this town.