This article was originally published in the Windsor Historical Society Newsletter Vol. 23. No. 2, May, 2005.

Antique collecting has become a popular American pastime, with an estimated 25 million Americans on the hunt for historic and unique treasures. This year, I explored the fascinating world of milk bottle collecting and learned about a recent gift to the Windsor Historical Society.

When I parked next to a car with the vanity license plate BOTTLES, I knew I was going to meet serious collectors at the Somers Antique Bottle Club’s 35th Annual Show and Sale. Held at the St. Bernard School in Enfield, Connecticut, the show attracted collectors of a variety of bottles, insulators, jars, candy containers, stoneware and related items. One of the several dozen annual bottle shows held across the country, the Enfield show drew bottle enthusiasts from the tri-state area who attended to buy, sell and share their collections with one another. 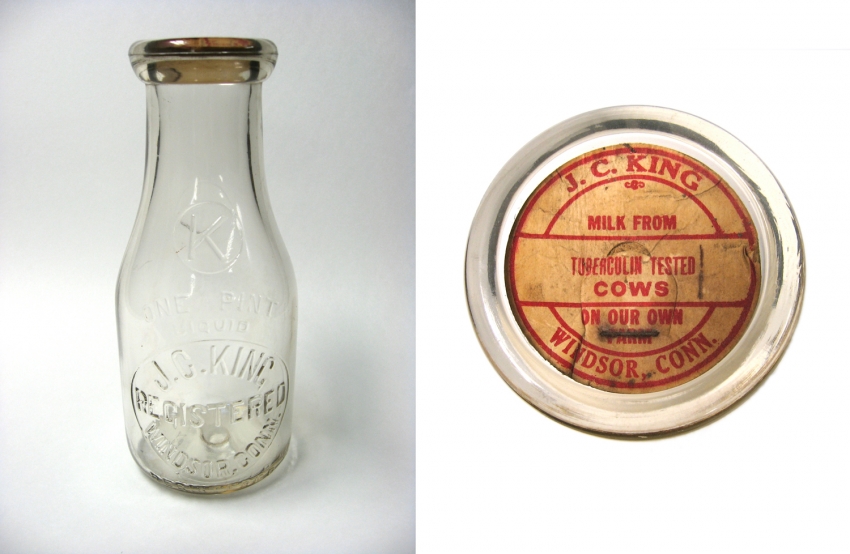 One-pint milk bottle with paper seal reading “J.C.KING / MILK FROM / TUBERCULIN TESTED / COWS / ON OUR OWN / FARM / WINDSOR, CONN.” Embossed on the side of the bottle is an encircled K and reads “ONE PINT / LIQUID / J.C. KING / REGISTERED / WINDSOR, CONN. / REGISTERED” Embossed on the base is “41” and the mTc logo of the Thatcher Manufacturing Company. WHS collections 1992.07.1, gift of Edwin Johnson.
J.C. King was located on Matianuck Avenue in the 1930s and 1940s.

I came to the show to learn more about a milk bottle recently donated to the Society’s collections. Made for Windsor farmer J. C. King, the quart-size bottle sports an orange image of a cow in a pasture on its front side, while on the reverse side the bottle features a boy and girl above the caption “Milk means Health”. The bottle is in good condition and has a wonderful link to Windsor’s twentieth-century history. Still, I wondered if the bottle was authentic, and if so, I wondered what the bottle’s structure and design could reveal about Mr. King and his dairy. These questions led me to Peter Manfredi, a milk bottle collector and dealer who was eager to teach me the connoisseurship of the milk bottle. 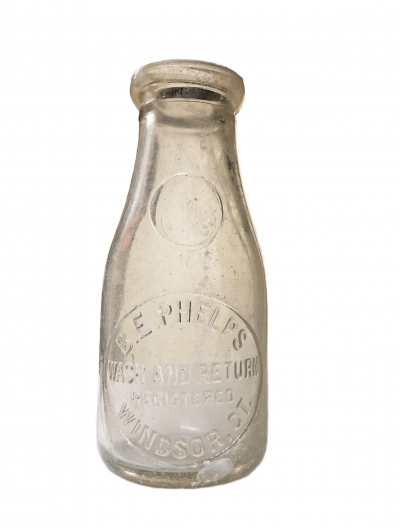 One-pint milk bottle embossed ” B.E. PHELPS, WASH AND RETURN, REGISTERED, WINDSOR, CT”. WHS collections 1986.61, gift of Lon and Jane Pelton.
We’re not quite sure where B.E. Phelps was located, but there was a Burton V. and a Burton D. Phelps who were milk dealers on Windsor Avenue in the Wilson section of town in the 1900s-1910s. 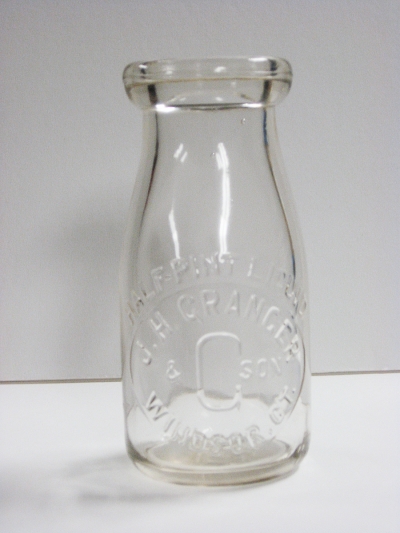 Half-pint milk bottle embossed “HALF PINT LIQUID / J.H. GRANGER / & G SON / WINDSOR, CONN.” Bottom of the bottle is embossed with the mark of the Thatcher Manufacturing Company of New York. WHS collections 2011.1.19.
John H. Granger’s dairy farm was located in the meadows on the east side of Palisado Avenue between Pierson Lane and Kennedy Road in the 1920s-40s.

Dairies began using milk bottles at the end of the 19th century as a way of storing and delivering milk to customers. Many dairies used bottles with embossed, painted or paper labels to encourage customers to return their used bottles to be refilled and redistributed. Like most small dairies, the J. C. King farm did not have the resources to make their own bottles, but instead bought personalized bottles from a bottle manufacturer. TMC, the mark of the Thatcher Manufacturing Company of Elmira, New York, is embossed on the bottle’s bottom, as well as a number 43 or 48 that dates the bottle to the 1940s. 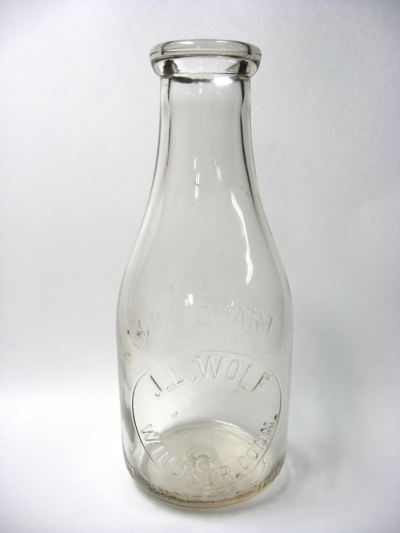 One-quart sized milk bottle embossed “ONE QUART / LIQUID / J.L. WOLF / WINDSOR, CONN./ REGISTERED” The mTc logo for the Thatcher Manufacturing Company in New York is at the base as is “11 5 14E”. The logo is on the bottom of the bottle as is “44E”. WHS collections 1980.15.1, gift of Wilfred Boyd.
Joseph L. Wolf was a farmer who lived on Poquonock Avenue near the Elm Grove Cemetery. 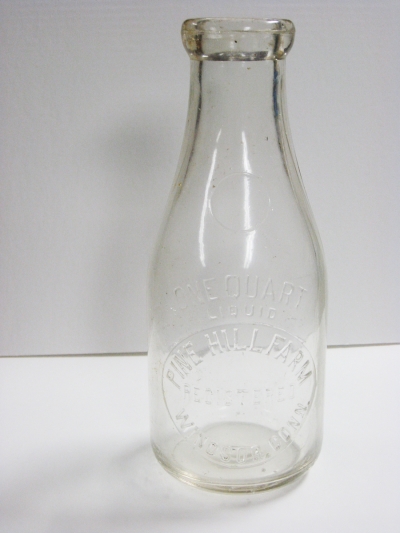 One-quart milk bottle, embossed “ONE QUART / LIQUID / PINE HILL FARM / REGISTERED / WINDSOR, CONN.” The mTc logo for the Thatcher Manufacturing Company in New York is at the base. WHS collections 1986.17.1, gift of Ruth Pelton.
Pine Hill Farm was located at 115 Rood Avenue and operated in the late 1930s-early 1940s.

The King milk bottle was used during a time of changing agriculture and technology. By the early 20th century, the number of Windsorites who owned their own milk cows was decreasing and more people had to rely on outside services for their dairy products. At the same time advances in appliance technology brought iceboxes and refrigerators into local kitchens, allowing homeowners to keep the milk fresh for extended periods of time. Milk bottlers responded to these changes, and by the mid-1940s milk bottle manufacturers were advertising square-edged bottles that they claimed would save space in the refrigerator. Yet even those models of modern design would pass into obscurity when plastic and cardboard containers became the cheaper and easier forms for milk storage in the 1960s. 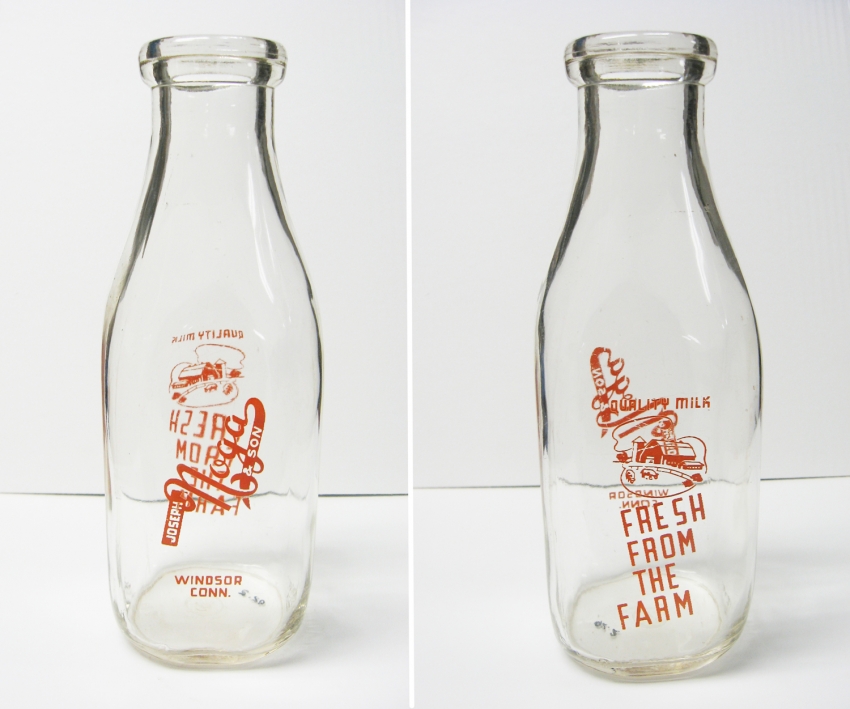 One-quart milk bottle with “Joseph Noga & Son Windsor, Conn.” printed on one side and “Quality Milk Fresh From the Farm” on the other side. WHS collections 1992.2.1, gift of Suffield Historical Society.
Joseph Noga was a dairy farmer on Kennedy Road.

Today, mid-20th century milk bottles range in price from $10 to $100 and attract collectors because they are affordable and attractive. Finding bottles from local dairies also makes the hunt fun and personal for enthusiasts. Whether intrigued by the milk bottles’ form, enthralled by their colorful graphics or simply nostalgic for a time of milkmen and home deliveries, local milk bottle collectors have found a tasteful way to preserve part of Connecticut’s 20th century history.