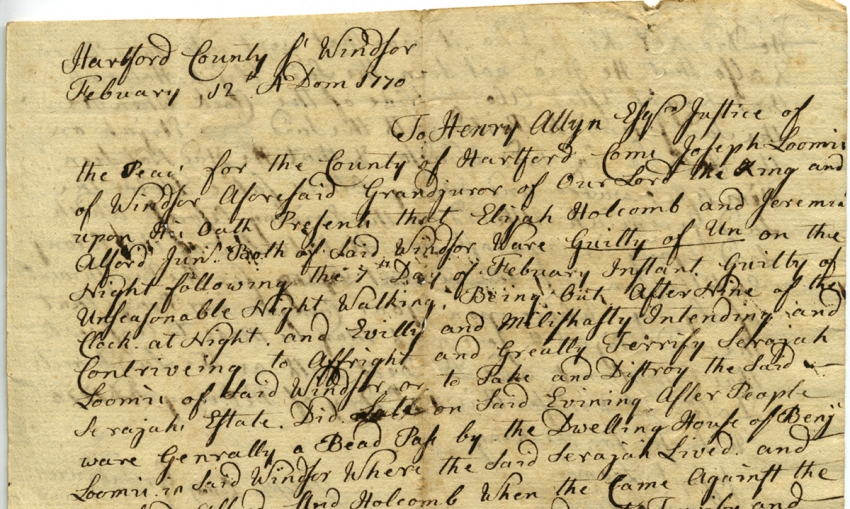 The beginning of a document from our Old Documents Project, which issues a complaint against some recalcitrant citizens.

In May 1711, the Connecticut General Court voted on an act against walking “in the night season”, the reason being that “great disorders and insolvencies are committed in the night by disorderly persons to the disquiet and hurt of her Majesties’ subjects.”

In other words, they wanted to discourage people from being out at night drunk and making a commotion.

The following legal document from our Old Documents Project reflects this law in action. It’s a formal complaint from 1770 about some late-night shenanigans, unappreciated by the victim of those shenanigans. The vivid language and detailed play-by-play illuminates the mindsets of the people of the time, even when those people are engaging in behavior that wouldn’t be out of place today.

(Transcribed and edited for clarity. Paragraph breaks and bolding are ours. Note that “the Island” is the high ground between the Connecticut and Farmington Rivers where the Loomis Chaffee School campus stands today.)

To Henry Allyn, Esq., Justice of the Peace for the County of Hartford –

Come Joseph Loomis of Windsor, aforesaid grand juror…upon his oath presents that Elijah Holcomb and Jeremiah Alford, Jr., both of Windsor…on the night following the 7th day of February [were] … guilty of Unseasonable Night Walking, being out after nine of the clock at night, and evilly and maliciously intending and contriving to affright and greatly terrify Serajah Loomis of Windsor or to take and destroy the said Serajah’s estate.

Excerpt from the complaint, highlighting the principle charges.

[They] did late on said evening after people were generally abed, pass by the dwelling house of Benjamin Loomis…where Serajah lived. And Alford and Holcomb when they came against Benjamin Loomis’s barn in order to terrify and affright Serajah, Holcomb went into Benjamin’s barn and left Alford standing as a guard…

Serajah, happening to see, run out of his house in great fright supposing that they were some evil-minded persons that were upon a thievish design. And upon Serajah coming to said barn, Holcomb, being inside the barn, made his escape out at the back side of the barn and ran off… [Upon] being overtaken by Serajah, Holcomb refused to give any reasonable account of his business in the barn.

And Alford, after seeing Serajah come out in such a surprise, made the best of his way off, and after being overtaken by Serajah, refused to give any true and direct account who it was that went into said barn or of his business.

All which conduct of Elijah and Jeremiah was against the peace of our said Lord the King and the laws of this Colony and to the great terror of sundry of his majesties’ good subjects. 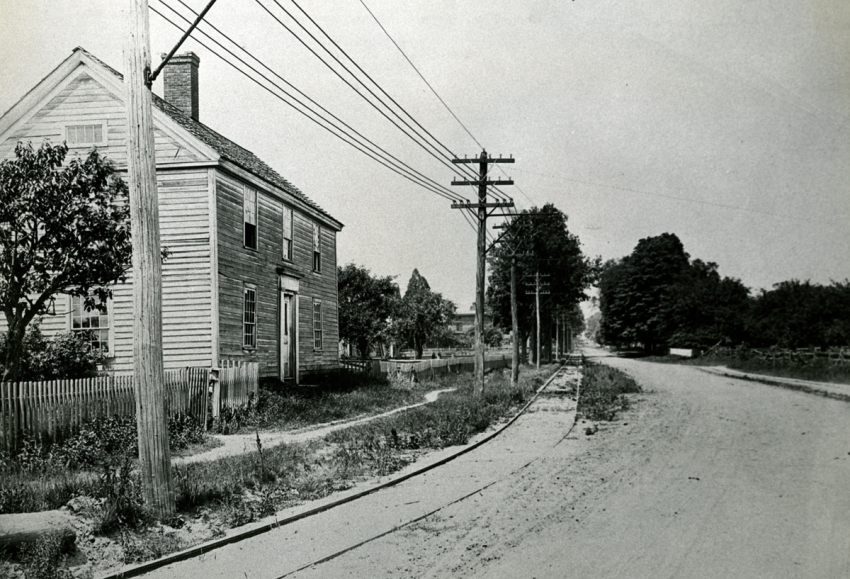 Serajah Loomis built this house in 1772, two years after this complaint. Perhaps these events convinced him he needed to move out of his brother Benjamin’s house. Serajah’s house at 949 Windsor Ave. is still standing today. WHS collections 1994.41.8, gift of Marguerie Christensen.

Yet nevertheless when he was overtaken by Serajah, he, Jeremiah Alford Jr. willingly and willfully lied to Serajah by saying that he did not know who it was that went into said barn and also that he had not seen Elijah Holcomb that night after about nine of the clock when he, Jeremiah, parted with Elijah on the Island in said Windsor, and that he had not seen him afterward and many other false words Jeremiah uttered on the evening aforesaid, which said lying is against one statute law of this colony…

Jeremiah Alford lied to Serajah Loomis a bunch of times too, which is also against the law.

Whereupon, your complainer prays that the said Elijah and Jeremiah may be made to answer to this complaint and be dealt with as the law directs.

Here’s the full document, front and back. 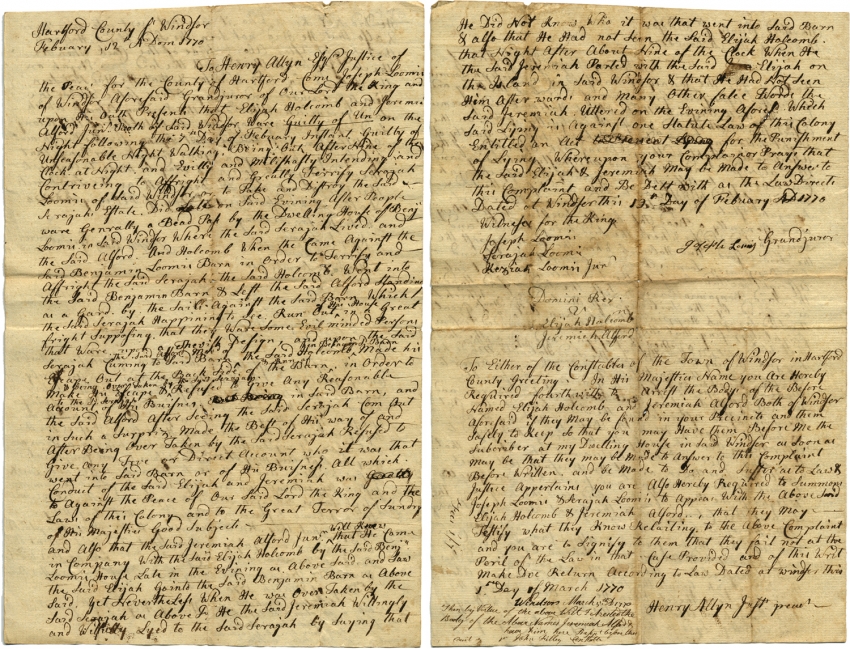 As you can see, following this complaint, Henry Allyn wrote a summons for the arrest of the bodies of Elijah Holcomb and Jeremiah Alford, Jr. John Filley, the constable, complied on March 5, 1770. We do not know the outcome of this case.