In 1903 the Connecticut Daughters of the American Revolution (DAR) acquired, restored, furnished and opened the Oliver Ellsworth Homestead in Windsor, Connecticut. It’s a milestone that represents the beginning of the landmark-as-museum phenomenon in Connecticut.

The Ellsworth Homestead and the Oliver Phelps-Hatheway House in Suffield have more in common than a connection to two guys named Oliver. Phelps and Ellsworth were contemporaries and acquaintances who used the same architect, Thomas Hayden (1745-1817) of Windsor, to design and build architectural features that redefined fashion and elegance in post-Revolutionary interior New England.

The American house museum originated in the work of patriotic women’s associations, most famously the Mount Vernon Ladies’ Association formed in 1853 to preserve George Washington’s Mount Vernon. A generation later, inspired by the nation’s centennial, interest in adapting landmarks for reuse as museums took root. In Connecticut, the DAR and the Connecticut Society of Colonial Dames were the first to embrace the idea and today own and operate several of Connecticut’s most important museum properties including the Webb-Deane-Stevens Museum in Wethersfield, Putnam Cottage in Greenwich, the Governor Trumbull House in Lebanon and the properties of the Faith Trumbull Chapter DAR in Norwich. 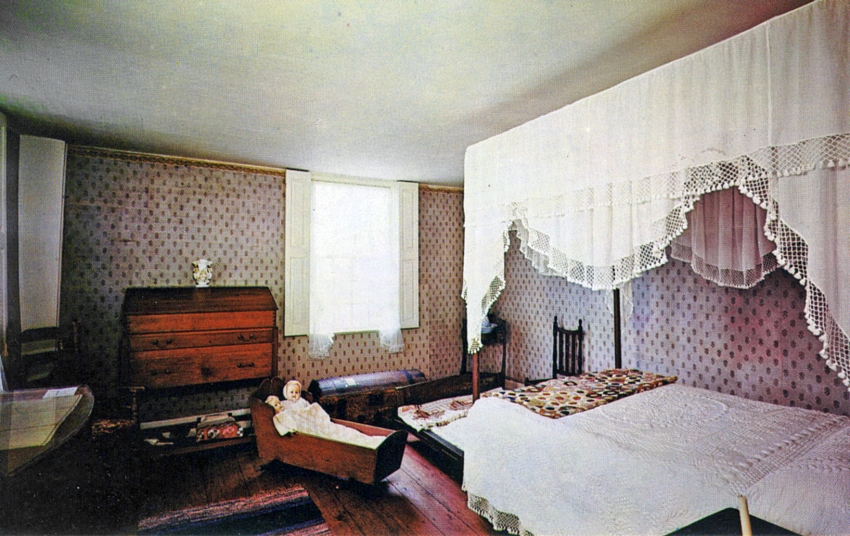 A cradle “which soothed to slumber his many children” in a bedroom of the Ellsworth Homestead. WHS collections 2014.42.36

Restoring the Ellsworth Homestead was a bold and original undertaking in 1903. Between 1891 and 1903, DAR chapters were formed in dozens of Connecticut communities. More than forty chapters donated collections and raised money to “put the house in order” in three months: papering and painting interiors, painting the exterior, repairing roofs and chimneys, adding new drain pipes, cleaning the old well, laying walks, and pruning or removing old trees and bushes. A committee composed of Mrs. John Marshall Holcombe, Hartford; Miss Clara Lee Bowman, Bristol; and Mrs. William H. Moseley, New Haven, worked feverishly throughout the summer gathering furnishings, making arrangements for the dedication and coordinating the transfer of the property from “100 prospective heirs” of the Ellsworth estate. 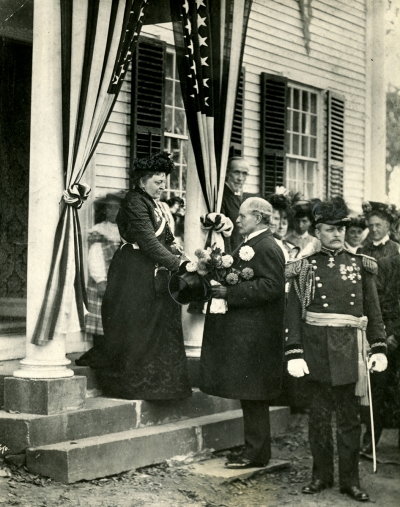 October 8, 1903, grand opening with Sara Kinney, State Regent of the DAR, on left and Governor Chamberlain in the middle. WHS collections 2019.1.8.

DAR State Regent, Sara T. Kinney of New Haven, officiated at opening ceremonies in which Governor Abiram Chamberlain and the First Co. Governor’s Foot Guard participated. Described as “the most important event in the history of the Connecticut DAR,” the opening attracted about 500 visitors and dignitaries. Patriotic flags and bunting were fastened to the nine surviving elms of the thirteen trees originally planted on the grounds by Ellsworth to commemorate the thirteen original states. Guests arrived by trolley, train, bicycle, horseback and on foot.

The furnishings committee was headed up by Emily Seymour Goodwin Holcombe (Mrs. John M.), first Regent of Ruth Wyllys Chapter DAR in Hartford. Holcombe, who went on to oversee Connecticut’s displays at international expositions in St. Louis (1904) and Jamestown, VA, (1908), was already renowned for her preservation work at Hartford’s Ancient Burying Ground and on behalf of the Old State House. At the opening she spoke of the “many objects that . . . bind us in a material association with a remote past,” the bedstead “on which he slept,” a cradle “which soothed to slumber his many children,” and a “sofa sufficiently rare and beautiful to thrill the pulse of any collector.” In addition to furnishings provided by the numerous DAR Chapters, the Ellsworth family lent heirlooms for the day including a “clock brought from France in 1801,” the “Wolcott family coat of arms,” and the chair used by George Washington during his memorable visit to the house in October 1789.

It may have been with President Washington’s visit in mind that Ellsworth commissioned Thomas Hayden to design and build the sumptuous south wing of his 1781 center hall mansion. Its stately columned piazza was an innovative architectural feature reminiscent of Washington’s Mount Vernon and the first of a series of early Connecticut mansions with similar two-story columned wings. Inside, Hayden designed a best parlor finished with raised-panel work, engaged corner columns, a bracketed cornice, and an elaborate overmantel.

Thomas Hayden first came to light in the 1960s when H.F. duPont removed the dining room from the Phelps-Hatheway House and reinstalled it at Winterthur Museum in Delaware. Hayden signed and dated a plinth from one of the pilasters – a rare and important piece of documentary evidence. 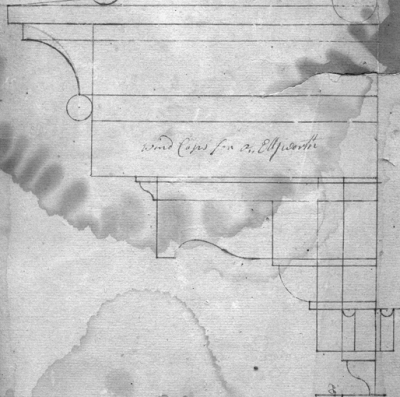 Years later I discovered a collection of architectural drawings – the earliest attributed to a Connecticut builder – and Hayden’s legacy as a post-Revolutionary architect/builder began to emerge. The drawings include ten sheets filled, some on both sides, with various small details (no elevations or floor plans) from various building projects meticulously inked onto heavy rag paper and pierced for duplication and use in the field by construction crew joiners. The drawings (private collection) date from 1788 to 1806 and document Hayden’s involvement in building houses for John Watson of East Windsor Hill (1788); Hezekiah Chaffee, Roswell Miller, Samuel Allyn, and Oliver Ellsworth in Windsor; and the new meetinghouse built for Windsor’s First Church in 1794 (Ellsworth headed the Building Committee).

The south parlor of the Ellsworth Homestead was one of the greatest rooms in 18th-century Connecticut. The DAR recently installed a scale reproduction of the famous portrait of Oliver and Abigail Ellsworth that originally hung there. The Ellsworth descendants donated Ralph Earl’s 1792 portrait to the Wadsworth Atheneum in 1903.

Although the original family furnishings were intact 100 years ago, the house came to the DAR unfurnished. It has taken a century to reassemble family heirlooms and create a furnishing plan that suggests how the house looked in Ellsworth’s time. Among the many treasures on display are the Gobelin tapestry presented to Ellsworth by Napoleon Bonaparte during his diplomatic mission to France in 1796, chairs from a set documented to Hartford cabinetmaker Aaron Chapin, and a fabulous Federal style sideboard that may have been made in Farmington by cabinetmaker Samuel Kneeland. 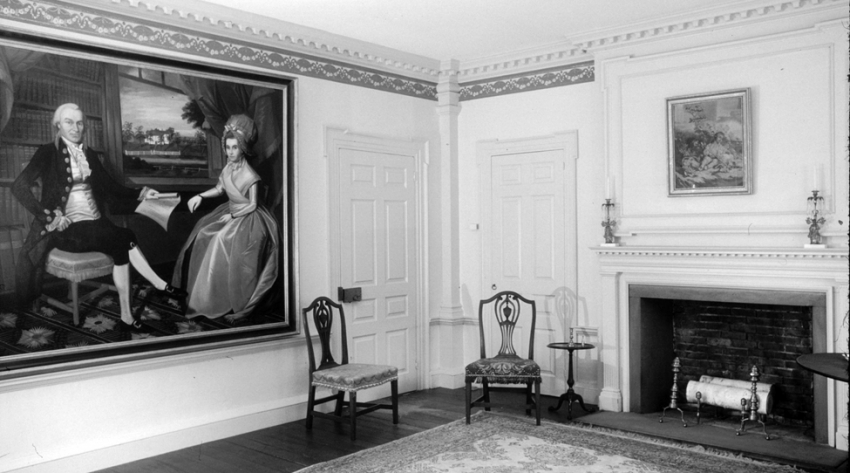 I have visited several countries and I like my own the best. I have been in all the States of the Union, and Connecticut is the best State. Windsor is the pleasantest town in the State, and I have the pleasantest place in the town of Windsor.