The Ballad of Mack Street

The following is a transcript (edited for space and clarity) from a June 2004 interview between Dr. Daniel Mack and WHS executive director Christine Ermenc. Dr. Mack discusses his family’s brickyard on Mack Street in Windsor and their method of brick making, as seen through Panel C of his Ballad of Mack Street painting triptych. 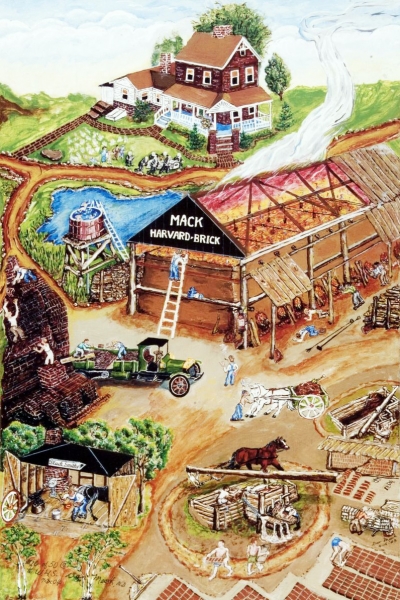 I’m anxious to have you see the last of this three-panel group, and that’s the brickyard. I can’t say “brickyard” without getting a little sentimental. The brickyard business has been in the family as I suggested for seven generations. Of importance is the fact that the Macks were making bricks in Windsor for 180 years. A significant element to realize is that there were forty-two brickyards in the area between the city line of Hartford and that of Windsor Locks; and all of the forty-two, like the dinosaurs, became extinct except the Mack yard, which stopped manufacturing in 1967. However, the name and the firm continued in sales and distribution and now represent fifty different brick companies. The location of the current brick company has moved to Warehouse Point where a railroad siding is available.

I want you to be aware that there are two very important features of colonial, water-struck brick. The first is its range of color. The second is its hardness. These two features persist throughout the brick so that it remains durable in all climates throughout the years. Its hardness doesn’t allow absorption of water, and its color is of constant consistency. These features are the result of the intense firing which is well above 1900°F.

Now to consider the manufacture of what we as children referred to as those “pretty, little red rascals” or how we take small, square packages of clay and make them into bricks.

If you’ll notice at the center of the panel there is a white horse and a gentleman backing him to the pit where the raw clay is deposited. In the pit there is whatever amount of water and one part sand and three parts clay which will stay or remain for twenty-four hours at which time it will become consistently pliable. This is a balanced composition.

Now observe the brown horse. Note that the horse takes its circular walk as he pulls the long arm of that shaft which rotates a spindle within a wooden chamber causing the tines on the spindle to sift through the clay, water and sand to mix it. The horse will walk in a complete turn around that circle; and he will stop exactly at a point they have taught him to stop and that will push out the very soft clay, just enough to make six bricks. The molder will scoop up the clay in a double-hand movement and fill each brick segment of the mold. He will shout “Jerry” and the horse will make another exact turn.

[In the painting,] the fellow in back of this chamber shoveling the clay into this machine is a duplication of myself. The fellow in the blue trunks is my brother Ed, and believe me that is a back-breaking job. The fellow molding the brick in front of the wooden box is my brother Russ. If you look at the right bottom edge of the picture you’ll see the rows of brown clay bricks. They are newly made bricks laid out to dry in the sun; and they are very, very soft. 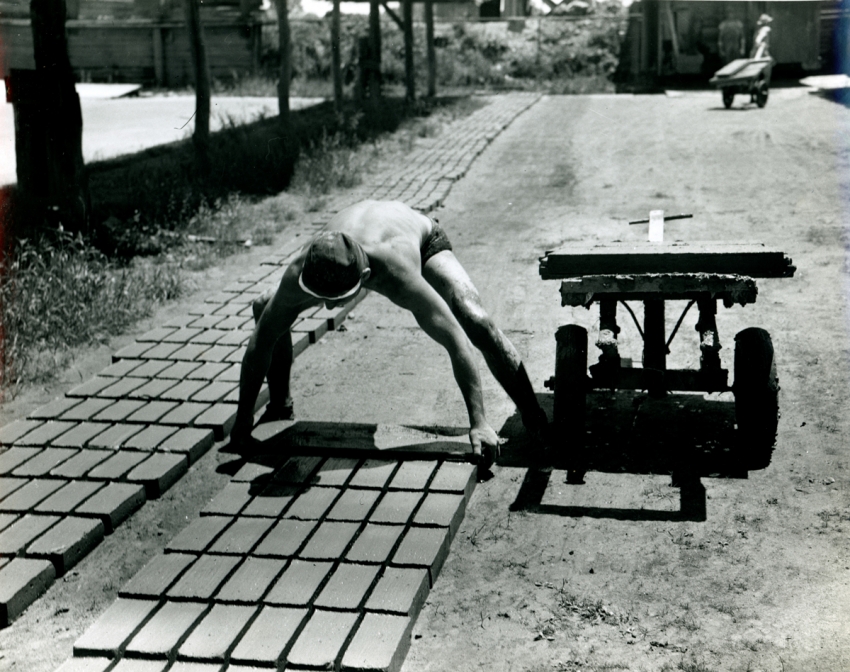 While we’re here we can look at the lower left corner. This is a duplication of the blacksmith’s shop. Until the 1900s we were using oxen and horses. Since the 1900s as the oxen became aged, they were gradually discontinued in the manufacture of the brick. 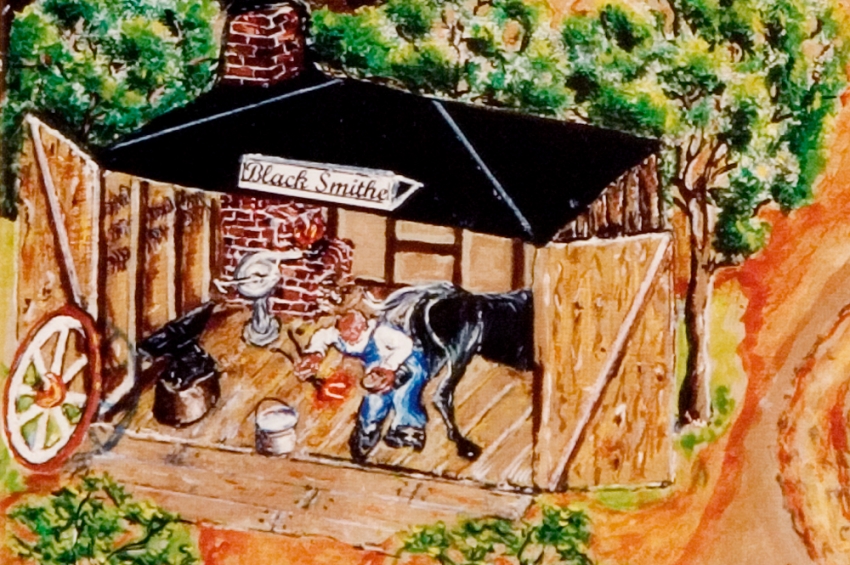 Detail of blacksmith shop, depicting Charles Babcock as the blacksmith.

While we were using exclusively horses in the manufacture of our brick, we would use at least twelve to fourteen horses; and sometimes during the busy season in the summer we would have more horses and rent five or six more for several weeks. The blacksmith was on the property of the brickyard, and he serviced the horses and kept the wagons functioning. You can see Mr. Babcock is putting a very red hot shoe on a very patient, tired horse. Although many blacksmiths contributed to the life of the brick yard, the only blacksmith in my years of experience was Mr. Charlie Babcock. He, a consistent and loyal employee, was a gentleman of profound consideration and patience to the animals and also tolerant of mischievous young ‘scalawags’ like myself.

The work on the brickyard is exhausting and very physically demanding. My great uncle Harry Mack was the superintendent and had laborers inquiring for jobs. He’d say “Let me see your hands.” They’d show him their hands; and if he observed no calluses, he’d say, “Shaw, boy. You’re certainly not used to hard work. The requirements are a weak mind and a strong back, and we’ll try to give them to you. We’ll hire you if you think you can do the job,” and he did and they did.

Water tank: During the hot afternoons our first assignment as young boys was to “hake” the brick, that is take the bricks that were dry enough to be handled and put them in racks so they could dry out. It was not unusual in the afternoon for young friends to come along and say “Come on, let’s go. Let’s get out of here.” We’d resist and say “No. We can’t go. We haven’t finished,” and they’d say “Come on. We’ll help you finish.” Swimming was close by; and we‘d climb a ladder, throw off our clothes and go in skinny dipping in the cistern sixteen feet high above so we could see everything that came along, especially when Uncle Harry was seeking us out for our unfinished job. Our heads would go under; but when we came up for air, he’d still be there. This water reserve, clay pond, was present in all brickyards and that persisted as our source of water. Below this cistern was a pump that was electrified and would put the water up there, and it [the water] would run by gravity to each of the stations. 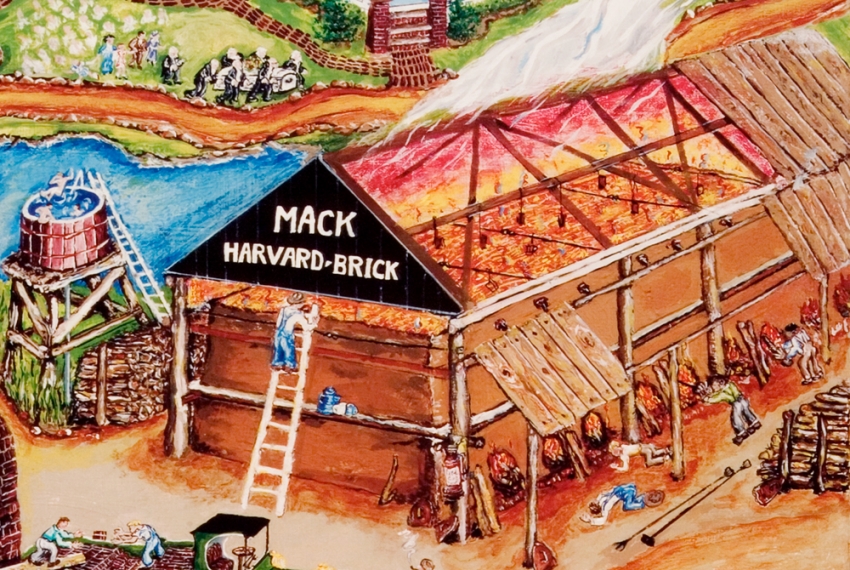 Detail of water tank and kiln.

Beneath the sign on the shed is the kiln that is in the process of being burned. Each kiln usually is made up of twelve to twenty arches. Each arch contained 20,000 to 30,000 bricks in each arch. The bricks within the kiln are so arranged that a fire-space draft connecting to all sides of each brick provides for a uniform burn. Depending upon how many weeks and months went into the manufacturing to produce between two and three million bricks, we’d have a kiln two or three times each year. This kiln would develop, as I said before, to a temperature of 1950°F degrees. My dad and his cohorts would determine the temperature not by thermostats but by studying the visible heat swirls and twists in the vapors that were generated and energized by the yellow to white heat.

The men in charge spent much time on their hands and knees crawling along the ground with close attention to the fire box within each arch. In the center of this fire tunnel, this pattern of intense heat would guide them as to when and how much wood fuel was to be added in the arches to maintain the desired temperature. The danger of too much heat is that the “pretty red rascals” of the kiln become melted down. If the brick fall down into the firebox, it will interfere with the positioning of wood necessary to continue the burn. It doesn’t mean the kiln is lost, but it is a serious complication. The obstructing mass must be removed and a fire aisle has to be re-established.

My father on the ladder is surveying the surface of the kiln. He is looking to see what amount of shrinkage has occurred. If you look closely, you’ll notice numerous single bricks suspended by wire from the rafters over the kiln. These bricks just touch the top of the kiln at the beginning of the firing. As the firing progresses, each brick in the kiln loses a quarter to one-half inch; and by the end of the burn the kiln has shrunk twelve to eighteen inches. The finished kiln on the left shows my “red rascals” with my father counting and disassembling the brick, passing them four at a time along the “conveyor belt” of several men. Ed and I are pictured at the end of this conveyance of “red rascals.” We tried to slough off this job with all the bending on to the youngest person because he had to do most of the bending with his youngest back!

I think that the other thing to comment on is that the firing is accomplished by four-foot lengths of wood, and the men that are working on the side down on the aisle in front of the arches are putting in the wood. One of them is pushing in those long irons. One iron is a rake-like tool, and they push it to the center and pull out hot coals to ignite the wood. The other long iron is a type of fork or trident that they push the wood to the center of the kiln. These are very hot, exhausting assignments. Beside each arch you can see the men have prepared for the next fill. When they yell “Fill her up, boys” they’ll run and get those diagonal pieces of lumber and push them in. I should tell you that twenty cords of wood are necessary for each arch so that we sometimes would have to have five hundred cords of wood on hand for a burn. The aisles and roads of the brickyard are just so loaded with available wood that you can’t pass. 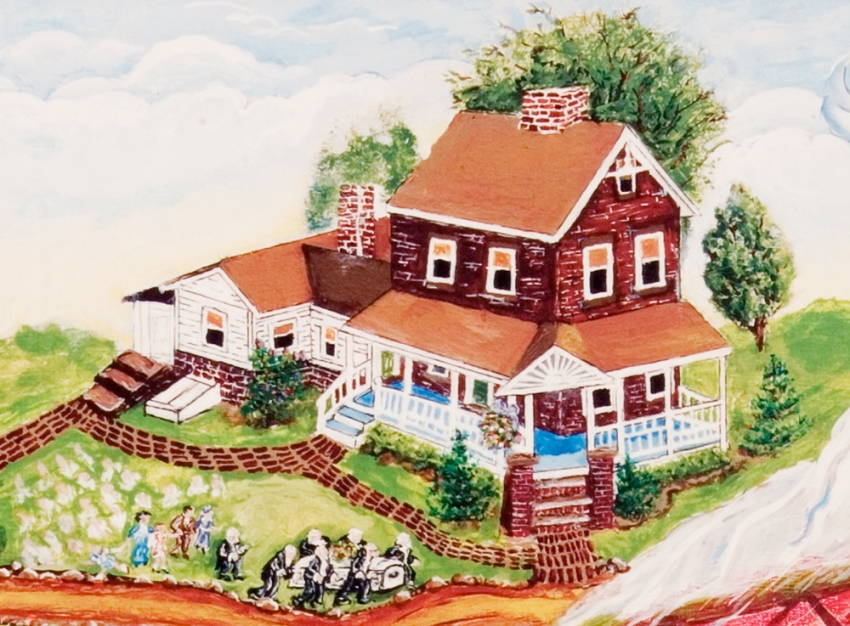 I want you to look at the top of the panel at the house. This is my grandfather’s home, and he built this and lived there. The important thing perhaps to bring to your attention is the funeral in the front yard. At that time, of course, funerals were held in the home. They put a gray or purple scarf and/or a big bouquet of flowers on the front [of the house] to let their neighbors and family know which door to enter in for calling hours. If you look at this, you’ll see the family gathered behind the coffin with the Rev. Mr. Roscoe Nelson leading the procession and coffin to the waiting limousine.

I bring this to your attention because it is more than the passing of my grandfather. The process of hand-molded brick passed at the same time. That was somewhere around 1937. At that time the knell was sounded that they would not make any more hand-molded brick but they would continue to make hand-made brick. The only difference in the process would be that an electrically energized machine would place the raw, mixed, soft clay into the molds. All other elements of the process other than the hand molder were the same.