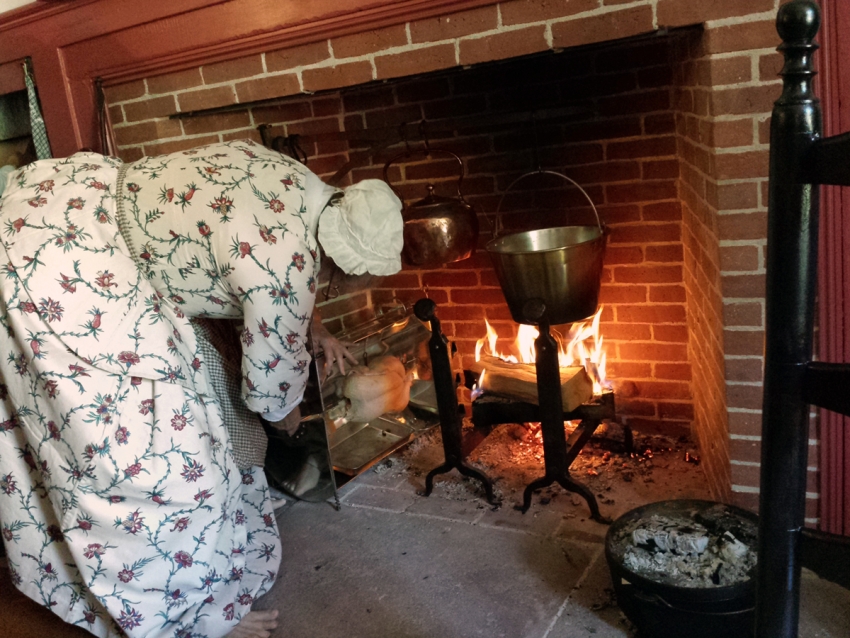 Costumed interpreter Becky Hendricks prepares a roast in the Strong Howard House. The fireplace was the focal point of domestic life in the winter and a necessary, but uncomfortable, component of chores in the summer. Photo by Michelle Tom.

The main idea behind the Society’s Strong-Howard House is to transport guests back to the year 1810, when the Howard family dwelt within the home. We put forth significant effort to make sure that it felt lived in and portrayed the various aspects of domestic life that the family would have routinely taken part in. Inside the house we attempt to convey seasonality with several different visual accents. The meal on display in the dining room is changed between the spring/summer and fall/winter to reflect the different food the Howards would have had access to. In the bedroom we change both the bedding and the bed hangings at the turn of the seasons. Most recently our curator, Kristen Wands, introduced fake flies into the house to demonstrate that the Howard family would not have had screens in their windows, which were quite uncommon during the first half of the nineteenth century. While these aesthetic touches lend the house an organic feel of seasonal change, many of the hard truths of early  nineteenth-century life can only be understood through the experiences of the families who lived through them. Families such as the Howards had to contend with shifting predicaments throughout the year, ranging from frigid indoor temperatures in the winter to swarms of pests in the summer. 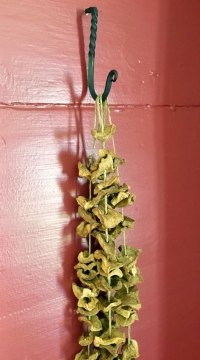 Dried fruit in the Strong-Howard House. Photo by John Mooney.

Every year, as temperatures plummeted and winter approached, early American families like the Howards were busy preparing for the coming challenges of the season. They preserved and dried fruit, salted meats, and stored vegetables throughout the fall, for use during winter. Once snow was on the ground, they could collect firewood and transport it easily by sleigh. The collection of firewood was a major priority early in the winter to ensure that they would have enough wood to last until the spring. During winter the family would most often be found in the kitchen, or keeping room, where they kept a fire going constantly throughout the course of each day. The coals of the fire typically remained warm enough overnight to make for an easy rekindling in the morning without the need to reignite the fire using a spark from flint and steel. Even with a roaring fireplace, indoor room temperatures on the coldest days would often remain under fifty degrees, with most of the heat being drawn out through the chimney, rather than into the room. Under these circumstances daily chores became exceptionally difficult to complete. No matter the temperature, clothes and dishes still had to be washed, yet when set to dry they could often freeze solid. Quill ink, wines, and fruit preserves were also known to solidify from the cold. The only solution to prevent freezing was to keep these possessions as close to the fire as possible. However, doing so also increased the possibility of an accidental house fire. As would be expected, winter temperatures brought hardship, discomfort, and even danger to early American homes.

While it might be assumed that the spring and summer months brought a carefree reprieve from the harshness of winter, in truth the warm season carried its own unique set of difficulties. Many chores, such as ironing and cooking, involved heat, meaning a fire often had to be kept lit in spite of high temperatures and humidity. For those fortunate enough to have one, the luxury of a summer kitchen, built away from the center of the household to reduce the diffusion of heat, could reduce the uncomfortable nature of summer chores. Along with the heat, pests posed a major nuisance for early American families. While window screens had yet to become popular in the early nineteenth century, numerous home remedies of varying effectiveness were used against flies and mosquitoes. Families might use cloth covers to protect both food and valuable possessions in the house, such as paintings and mirrors, from fly specks. One rather questionable solution against mosquitoes was to burn brown sugar in order in an attempt to smoke them out of the house. Catherine Beecher, in her 1841 guide to homecare, A Treatise on Domestic Economy, recommended dealing with ants by pouring boiling water on the cracks through which they have entered the house. She continued by advising to paint over the cracks with highly poisonous mercury chloride in order to prevent the ants from returning.  Fortunately, since the nineteenth century, we have developed far safer and more effective methods for dealing with insects. 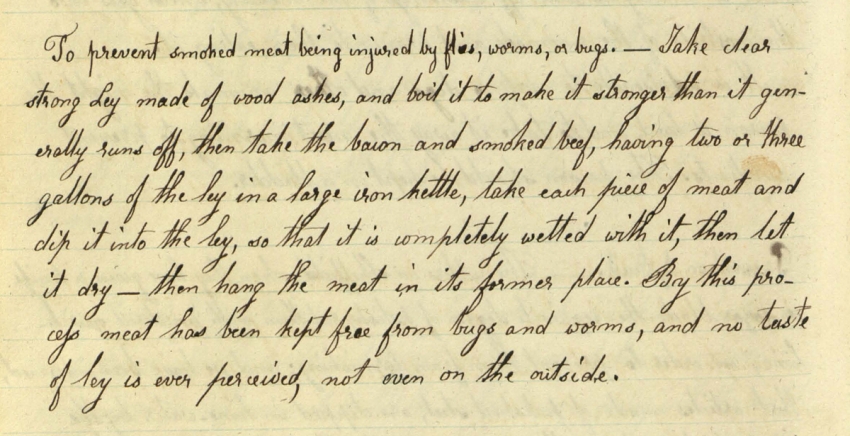 In a world where indoor comfort can be attained by simply setting a thermostat, it’s easy to forget how much in past centuries the seasons affected daily life. Winter undeniably stands out as the most disruptive season in New England for domestic comfort. Along with freezing temperatures, winter could also bring hunger and death to a family that had not prepared properly for it. While summer was certainly a less dangerous time of year, it often proved to be no less uncomfortable.

For a family living in the early nineteenth century, like the Howards, a large portion of each day would be spent dealing with the difficulties brought on by the seasons. The next time you tour a historic home, be it the Strong-Howard House or any other, make sure you take the time to imagine the tremendous difficulties that the families who dwelt there had to face every year. Doing so can provide a better understanding of the past and will also certainly increase your appreciation of modern conveniences!