Milestone marker formerly located at Windsor Locks on the Old County Road, indicating it was 12 miles from Hartford. WHS collections 1975.19.

They are the red sandstone markers set on the sides of the roads with the letters H or H.C. chiseled into them. The letters indicate the number of miles to the Hartford Court House, today known as the Old State House. Over the years they have been discarded, recycled as paving stones or simply stolen.

The idea of milestones dates back to Rome when a golden marker was placed in the Forum from which all roads radiated. The idea was then brought to America from England, stones first appearing in the vicinity of Boston and Philadelphia. They were introduced into Connecticut from the southwest and rapidly spread east and north along the old colonial highways.

In 1787 the Connecticut legislature ordered that “towns shall set up milestones on mail routes, marking distances from the county towns at the expense of the towns” and the milestones arose like mushrooms. In post-Revolutionary War Connecticut, turnpikes came into vogue. Between 1795 and 1820 almost 100 turnpikes were constructed. In 1796 a new state law imposed a $7 penalty on the towns for non-compliance. The towns found it financially burdensome to erect milestones on their new turnpikes, and the penalty was dropped. However, anyone caught destroying a milestone would be fined $7. By 1830 it is estimated that around 500 milestones were in existence statewide.

Stones erected before the Revolutionary War were usually rough cut, perhaps dragged to its location from a local pasture and frequently misspelled. When studying milestones, this period is called the Colonial Period. During the Intermediate Period from 1776 to 1795, there was considerable improvement in the stones appearance. “Care was taken in the style and shape of the letters…and the stones were cut smaller and neater.” From 1795 and well into the 1800s, a time called the Turnpike Period, sandstone was usually selected for the milestones; and there was consistency in shape and lettering up and down the turnpikes. “When the old state routes fell into disuse and the steam railroad burst into popularity…about 1850, [the milestones] simply lost their job.” When automobiles and highways came into use, there was an appalling loss of milestones. In 1928 when Route 159 in Hartford was widened, a neighborhood milestone was temporarily lost. Helen Royce, who lived nearby, related how the Benjamin Franklin or Colonial Era-stone which stood near a gas station was recovered:

Many of us loved the old stone and looked for it every time we passed. One Sunday we took up the morning paper giving an account of the celebration incident to the widening of Windsor Avenue [Route 159]. What has become of the historic milestone was our first thought. A trip to its former standing place was made, and our worst fears were realized – the stone was gone! Inquiries were started, and it was found that through a misunderstanding of orders, the stone had been removed. An immediate search was made and, miracle of miracles, the stone was recovered among the rubbish taken from the newly widened street.

The stone was given to the Connecticut Historical Society for safekeeping. 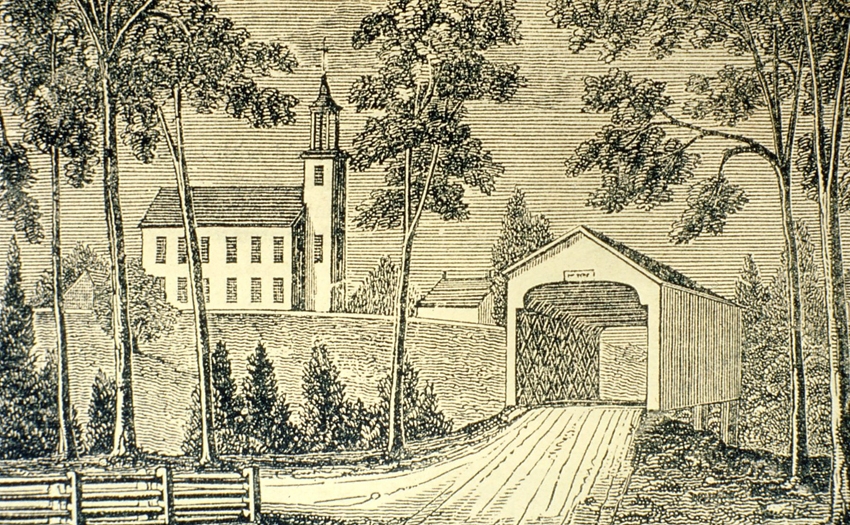 Block print drawn by historian (and former Windsor resident) John Warner Barber, showing a view looking north over the Farmington River Bridge at Palisado Avenue (Rt. 159) towards the First Church of Windsor. Barber’s print shows the original façade of the church, before it was renovated in 1844. This road, which runs from Hartford to Springfield, would have been lined with milestones in the 19th century.

In his book Historical Sketches of Windsor, Conn. (1900), Windsor historian Jabez Hayden states that Windsor’s stones were erected in 1802 when Suffield resident Gideon Granger was the nation’s Postmaster General. Hayden’s uncle Herlehigh Haskell “set the milestones [himself] at his own expense…when the highway from Haydens [Hayden Station] through Windsor Locks to Suffield was opened in 1815.”

Windsor Historical Society has one extant milestone sitting in our courtyard (see top image). It originally stood on the east side of Old County Road in Windsor Locks, and accordingly shows 12 miles to Hartford.