Listening to the Silence: A Close Reading of Encounters with Windsor’s Native People The statement that the town of Windsor was founded in 1633 typically conjures up images of colonists, the emigrants from Dorchester, MA staking their claim in the new world and constructing a small but important part of the American landscape. This makes sense because, as the saying goes, history is told by the victors. Or in the case of New England’s early settlers and its native populations, perhaps history is told by the survivors.

That winter and spring, a virulent strain of smallpox swept through the Connecticut River Valley, finding among its victims both sides of the soon-to-be-fought Pequot War. In an entry in his journal, Plymouth, MA colony governor William Bradford discusses the Windsor Indians’ “thousand” Pequot enemies, a “stout” people succumbing to the disease while “inclosed in [their] fort.”1 The disease also ravaged the Windsor Indians themselves (likely the Poquonocks, Podunks, and other loosely related tribes). Bradford’s description is vivid and graphic:

The condition of this people was lamentable, and they fell downe so generally of this diseas, as they were (in ye end) not able to help on another: no, not to make a fire, nor to fetch a little water to drinke, nor any to burie ye dead; but would strivie as long as they could, and when they could procure no other means to make fire, they would burne ye woden trayes & dishes they ate their meate in, and their very bowes and arrowes; & some would crawle out on all foure to gett a little water and sometimes dye by ye way.2

It’s worth lingering on the winter and spring of 1633-34 because doing so provides insight into the area that would become Windsor just before it became the focal point of a complex struggle between the Dutch, English, Pequot, and the River Indians (an umbrella name for the many small tribes living along the central part of the Connecticut River3). In his 1900 volume on Windsor history, Historical Sketches, Jabez H. Hayden speculates on why the land was so “free” when the early white settlers moved into the area. Referencing evidence that the native people had once cultivated a thousand acres of crops in the area that would become Windsor Locks, he asks, “But where were the Indian cultivators when the whites came?”4 For Hayden, the answer to this question was “pestilence” and not the “whites” who brought the pestilence.

It’s safe to assume then that the smallpox outbreak of 1633-34 was not the first such incident in the Connecticut River Valley. While Roger Ludlow, leader of the Dorchester group, observed that the area was “entirely void of inhabitants,”5 this emptiness was not the result of unused or unclaimed land as much as inadvertent and unchecked biological warfare.6

Although white settlers did not understand their role in transmitting the epidemic to the valley, Bradford’s journal indicates an awareness that they were not afflicted. He writes,

“The cheef Sachem him selfe now dyed, & allmost all his freinds & kinred. But by ye marvelous goodnes & providens of God not one of ye English was so much as sicke.”7

This passage is significant because it reveals a conceptualization of a God that offered particular mercies to a chosen group. But more than that, the chief sachem’s death set off a chain of events that would profoundly affect the development of Windsor.

This sachem was named Sheat (or Sehat), and he was succeeded by both his son Coggerynosset and his nephew Nassahegan (or Nassacowen). The two cousins practiced a joint sovereignty that lasted at least 45 years and played a clear role in shaping the town. As Coggerynosset explained in an undated deposition, Nassahegan “was so taken in his love of the white man that he gave them certain lands for some small matter.”8 A review of the early Windsor land records reveals that Nassahegan deeded or sold land to English settlers in 1635, 1642, 1659, 1662, 1665, 1666, and more.9 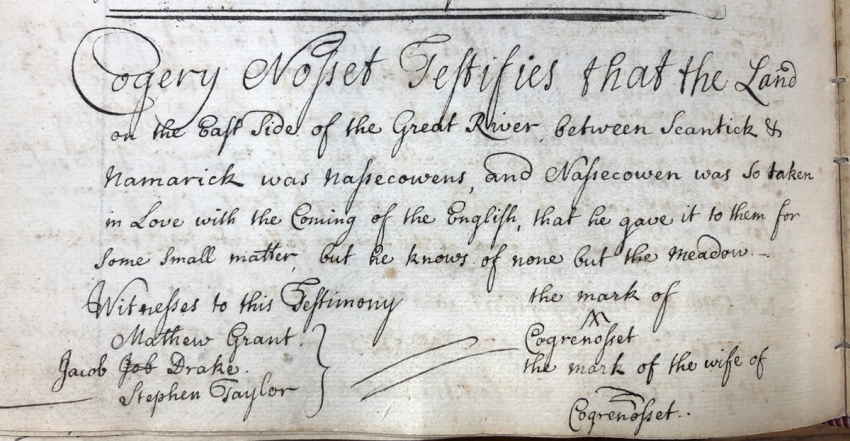 Transcription of a testimony given by Coggerynosset about his cousin Nassahegan, both successors to the Poquonock sachem Sheat. Transcribed by Windsor town clerk Timothy Loomis, any time between 50 to 100 years after they would have signed the original document. Courtesy of the Windsor Town Clerk’s Office.

Because the land deeds do not, unfortunately, reveal the motives behind the transactions, this might be regarded as the wanton disposal of his ancestral lands. But there are enough details in the records to allow for speculation of several potential explanations.

Prior to 1633, delegations of River Indians trekked over 100 miles to the Plymouth Colony in order to recruit settlers to their area.10 As Jabez Hayden explains,

“They had heard that the white men with their guns were invincible, and hoped that under such protection the Pequots would no longer oppose them.”11

Because the Poquonocks and their affiliated tribes saw the English as a sort of salvation against a more immediate threat, it would stand to reason that Nassahegan would use the deeding of land as a means of securing a permanent English presence.

Further, in 1642, four years after the end of the Pequot War, Nassahegan deeded a large parcel of land to the “hero” of the war, Major John Mason. Why?

The Pequot War, in short, was the result of complex relationships between the dominant Pequot tribe and the River Indians, as well as between the English and the Dutch. Through an early alliance with the Dutch, the Pequots maintained control of the region. This control began to unfurl as the River Indians developed alliances with the English, and came to a head in a series of battles. The Pequots, whose population at that point had already been cut in half due to smallpox, were unable to recover from Major Mason’s dawn attack on Mystik Fort, or from the subsequent skirmishes that followed.12

Given that the Pequot War, replete with genocide under Mason’s command, effectively ended the Pequot threat in the Windsor area, it’s possible to see the 1642 land transaction in particular as a form of tribute or payment to Mason. The rest of the land transactions, and the “small matter” Nassahegan accepted in exchange, might be seen as an extension of this early relationship.

However, bearing in mind the fact that the English settlers believed that the land surrounding the Connecticut River was more or less deserted and uncultivated when they arrived, there is an alternate explanation for Nassahegan’s seemingly extreme divestment of land. 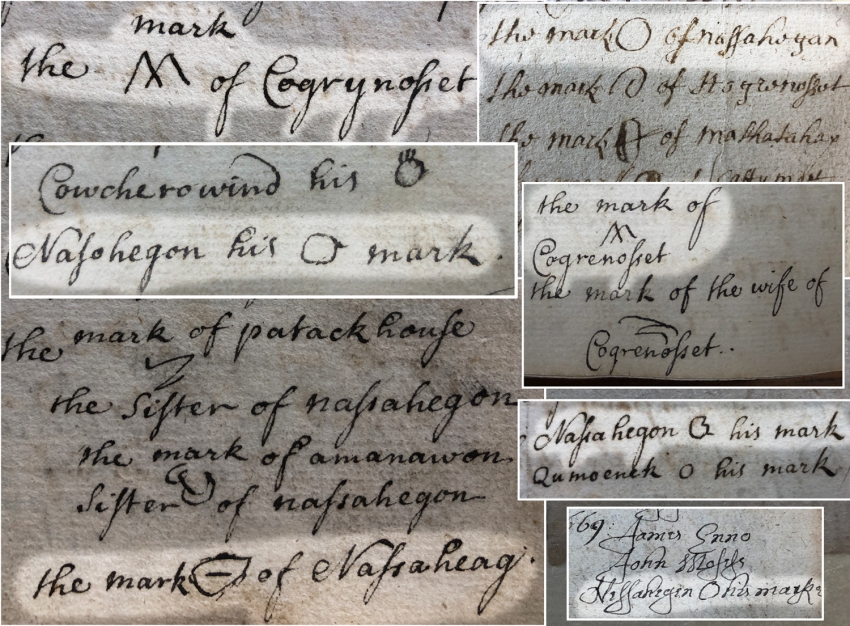 The marks of Nassahegan and Coggerynosset (highlighted), along with some others, in Windsor land deeds, as interpreted by Windsor’s various town clerks in these official transcriptions. Original documents with original marks are not known to be extant. The copies depicted here are located in the Windsor Town Clerk’s Office.

In a brief footnote, Stiles acknowledges that it was “a common practice to ‘buy off’ when an Indian appeared to lay claim to the land.”13 Land ownership, as we now understand it, was not a concept that existed in the Connecticut River Valley prior to the arrival of European settlers. Retrospective newspaper headlines like “Windsor’s price was corn and blankets” are reflective of a historical memory that sees white settlers as clever or malicious (depending on one’s point of view), obtaining Indian land for pittances.

However, according to historian and former WHS director Robert Silliman, the land transactions between settlers and Indians were “the result of an exchange between two cultures that had utterly different values, goals, and beliefs.” For Nassahegan and his predecessors, land ownership was an alien concept. Another Plymouth governor, Edward Winslow, noted that “every Sachem knoweth how far the bounds and limits of his own country extendeth.”14 Land wasn’t owned, it was used. Nassahegan may have seen himself as offering privileges of use to allies who had successfully vanquished the Pequots. Given the contrast between these ideologies, it’s possible that Nassahegan would have granted his allies use of his lands while still feeling that his sovereignty over them was intact.

In considering the settling of Windsor, we might do so in a way that moves beyond the narrative of a group of stalwart English emigrants. Rather, we might listen to the silences and read between the lines to imagine a region whose inhabitants, the River Indians, followed certain patterns of land use for many centuries. These patterns of use were deeply and permanently interrupted by disease. The smallpox epidemics not only killed thousands of people, they disrupted generational structures and changed the world around the Native people who survived, as well as how the young and old interacted with that new world.

Additionally, preexisting tensions between tribes were amplified by the influx of alliances and materials. The English nearly destroyed the Pequots. In gratitude, the River Indians unintentionally traded and deeded land in such a way as to allow the white settlers to construct permanent material and ideological structures in the absence left by the epidemiological decimation of the Native population.

Anne is an associate professor of composition/rhetoric and writing program director at Springfield College.