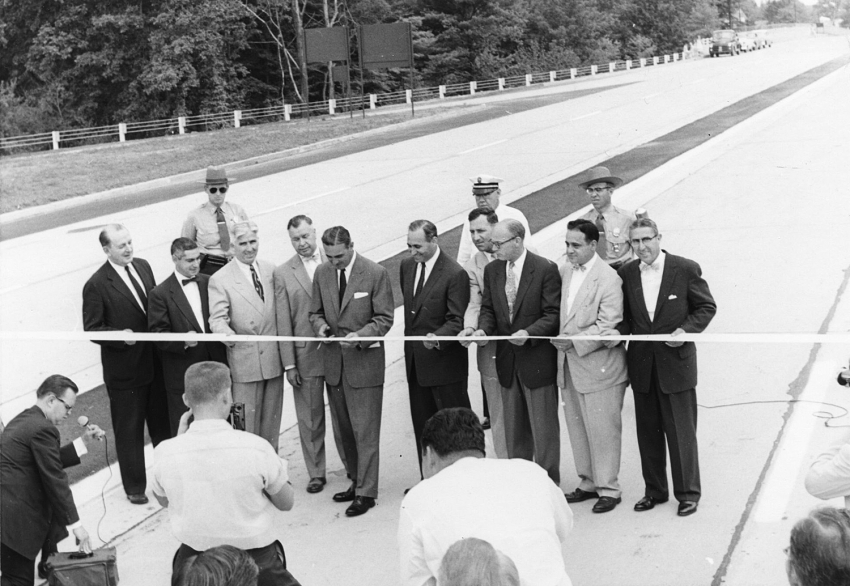 For decades, Interstate 91 has stood as the most prominent roadway in Windsor, splitting the town vertically since its initial opening as the Hartford-Springfield Expressway in the late 1950s. By 1961, the highway had been rebranded as part of I-91, the majority of which was in planning stages or under construction in numerous locations throughout Connecticut, Massachusetts, and Vermont. But as early as 1964, although the road was merely eight years old, its four-lane design was already proving insufficient for ever increasing commuter traffic.

Despite this early recognition, it took nearly thirty years before the state completed an expansion of I-91 in Windsor. In the interim a long and heated debate raged between Windsor citizens and the state over highway construction and expansion within the town.

By the mid-1960s, the Connecticut Department of Transportation (DOT) was planning an expansion of I-91 north of Hartford, along with a future ring road around the city dubbed I-291 that would cut through the Wilson neighborhood of Windsor. In 1964 state officials met with residents to present the planned layout of the highways and allow local property owners to make arrangements if affected. State representative Victor Tudan insisted that the “highway plans are made and will not be altered,”1 but despite this confidence, talks dragged on and tensions grew for many more years as the state reconceived I-291 as a smaller expressway that would connect I-91 in Windsor to Route 5 and I-84 on the other side of the Connecticut River, and continued to evaluate various plans for I-91 and other possible traffic solutions.

During the 1970s, public resistance to new highway construction grew throughout the nation and the situation in Windsor was no exception. In August of 1970 a crowd of about 100 Windsor residents, along with Windsor Mayor Milo Peck, gathered to protest the expansion of I-91 at Hartford City Hall, where a public hearing on the expansion plans was taking place.2 They criticized the lack of mass transit in transportation planning, the perceived negative effect that easy access to other towns would have on local businesses, and the isolation of Windsor’s Wilson neighborhood, which would be cut off from the rest of the town by the highways.

The debate continued through the 1970s and into the 1980s. Windsor residents formed multiple advocacy groups to formally object to the highway expansion plans. One group, People Against Highway Expansion in Windsor, filed a claim that the plans violated the Civil Rights Act by forcing “a disproportionate number of persons from protected classes – such as minorities, elderly, handicapped, and low income – to relocate.”3 Two other groups, Action-Save Connecticut’s Oldest Town (ASCOT) and Families for Windsor, appealed to Windsor’s Town Council to hold a vote on the matter of taking legal action against the state.4 An initial special vote drew unexpectedly large crowds, but failed to gather the requisite support for a lawsuit.5 Dueling ads that appeared as flyers and in local newspapers, both against and for the September 11 referendum vote.

A later public petition led to a town wide referendum, where residents succeeded in persuading the town leadership to promise to negotiate with the state, but also file a lawsuit if necessary.6

Windsor Journal article about the September, 1984 vote where townspeople voted to take legal action against the state, showing 3,489 votes for and 2,352 votes against.

Negotiations between the town and the state DOT proceeded into 1985 with the town asking for two major concessions in the highway plans: the elimination of I-91 high occupancy vehicle (HOV) lanes and a change in the proposed layout of I-291 from an elevated expressway down to a smaller-scale highway at street level. Discussions soon broke down, with the DOT arguing that the removal of HOV lanes would require “vast redesign work” and that a major reduction in the design for I-291 would jeopardize federal funding for the project.7

In March of 1985 the Windsor Town Council unanimously voted to sue the state DOT, the Federal Highway Administration, and the federal DOT in order to obtain design changes for the highway projects.8 Windsor’s lawsuit against state and federal transportation agencies proved short-lived. The town filed an injunction on I-91 construction, but the judge overseeing the case delayed ruling on the injunction, allowing the state to proceed with the first phase of expansion from the Massachusetts state line through East Windsor.9

In August of 1985 CT U.S. Congresswomen, Barbara B. Kennelly and Nancy L. Johnson, presented the Windsor Town Council and the transportation department with a plan for a negotiated settlement, which included assurances of state assistance to negate negative impacts of construction and a reduction in the proposed height of I-291. However, for many highway expansion opponents it did not adequately address their deepest concerns about the HOV lanes and overall scale of I-291. Despite vocal criticism of the compromise from some elements of the public, on October 15, 1985 Windsor Town Manager Albert G. Ilg signed a legal agreement between the town and DOT that effectively ended Windsor’s lawsuit.10

The final settlement provided Windsor with a choice for the design of I-291: either keep the state’s original plans of an elevated expressway, dubbed Alternate A, or adopt a new layout for a lowered I-291 with its east and west lanes surrounding both sides of the already existing Putnam Memorial Highway and “a complex system of bridges, ramps, and intersections” providing access to local roads and I-91, dubbed Alternate B.11

Opponents of the original I-291 plan were also frustrated by the apparent shortcomings of Alternate B, which many perceived as a method of coercing the town to accept the original elevated expressway design. Some citizens even questioned the legality of retaining the original highway design after voters had authorized the town to pursue a lawsuit in order to alter that very design. With two consulting engineers and the town planner, Mario Zavarella, heavily criticizing Alternate B, the Town Council voted 6-3 in favor of Alternate A, essentially allowing the state DOT to preserve its initial plans for I-291.12

Even as construction on I-91 and I-291 began in the late 1980s, elements of public resistance were still present in Windsor. In June of 1988 a group of 25 protestors gathered at the Hartford home of U.S. Rep Barbara B. Kennelly and the Governor’s Mansion, hoping to garner political support against I-291.13

Later that month, under pressure from several different regional organizations such as the Human Rights and Environmental Coalition Against I-291 and the Greater Hartford NAACP, Windsor’s Town Council asked members of Connecticut’s congressional delegation to investigate restricting federal funding for the construction of I-291 until state and federal transportation agencies addressed concerns about civil rights violations against Wilson residents due to highway construction infringing on their properties and neighborhood.14 The congressional representatives all declined the request, citing Windsor’s earlier legal settlement, issues of legality regarding the interruption of federal funding, and the imminent start of construction.15 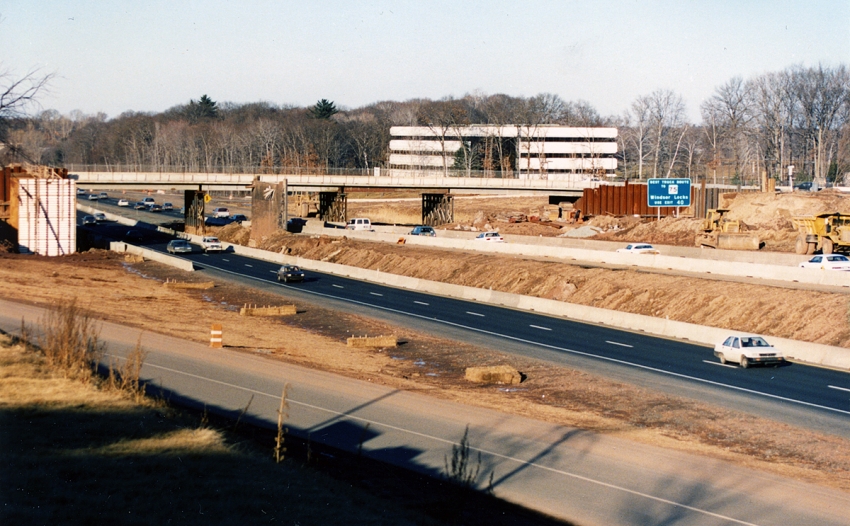 Construction underway along I-91 and the Bloomfield Avenue overpass in 1990. HOV lanes and their associated on/off ramps, which were added between the already existing highway lanes, were one of the most contentious elements of the I-91 expansion plan. WHS collections 1992.42.R35-24A. Photo by Adelbert Coe.

By the early 1990s the expansion of I-91 had been finished and on September 22, 1994 I-291 opened with a ribbon cutting ceremony held by the CT DOT and a parade featuring town officials from South Windsor, Manchester, and East Hartford. The Hartford Courant’s reporting on the event did not mention Windsor representatives being present for the opening.

Despite a decades-long battle against highway construction, opponents had merely managed to postpone the state’s plans. While their efforts may have failed in the end, the protests by local advocacy groups and the associated lawsuit exemplify the growth of public resistance to highway expansion that took place in the 1970s and 1980s.

Today there is a popular perception that the large-scale transportation projects of the 20th century divided and damaged many communities throughout the country. It has been 25 years since the completion of Windsor’s last major highway projects and perhaps only the town’s longtime residents can truly account for what effects they have had on the community at large.