How the Fyler House Became the Strong-Howard House, Part 3

This article was first published in 2006. We present it as it was originally written, with references to dates at the time.

This spring a team of architectural detectives studied the Strong House to produce a Historic Structure Report that documents the house’s structural history. The team, which included architectural historians, social historians, and structural analysts, studied the house through architectural surveys, scientific analysis, and photograph and document research from the Society’s library and other academic archives. The team performed wallpaper analysis, paint analysis, and dendrochronology (dating wood by counting tree rings) to date each section of the structure. They also photographed and measured the house to create computer assisted drawings that illustrate the house’s structural evolution. 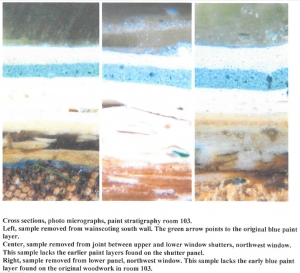 Team leader and architectural historian Tom Paske explains, “The house is a very unusual and rare survival,” pointing out that while many wealthy 18th-century homes are still standing, the Strong House is one of only a few middle-class houses to survive. Although these smaller homes were once numerous, most were remodeled or replaced when their homeowners could afford newer or better housing.

I recently toured the house with Tom for a progress update on his team’s Historic Structure Report. Tom’s research shows that the Strong House has undergone six major construction phases. 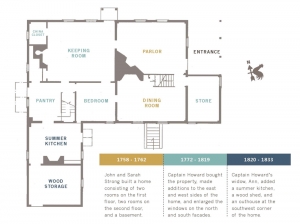 Floor plan of the first floor of the Strong-Howard House, differentiating between the different phases of construction.

The original house, likely built by John and Sarah Strong around 1758, was a small, gambrel-roofed house with two first floor rooms, an unfinished second floor, a cellar kitchen and possibly a lean-to.

In the second phase, a gable extension was added to the house’s west side between 1760 and 1800. This extension stopped at what is now the large beam in the “Keeping Room”.

Captain Nathaniel Howard finished the two rooms on the second floor and extended the west gable to its present size between 1800 and 1820, creating a large first floor kitchen and additional attic space during phase three.

The Stiles sisters made the fifth set of changes to the house after they arrived in 1837. They added Victorian details to the house’s interior and exterior, closed the kitchen fireplace, and added a kitchen stove.

Windsor Historical Society members are responsible for the final series of alterations to the house. After purchasing the home in 1925, they used it as their museum headquarters, a historic house, a short-lived tearoom, and lodging for guests and tenants. They struggled to make the house suitable for modern habitation while also restoring its colonial appearance. They strengthened the floors, added (and later removed) modern plumbing, tore down a Victorian front porch, and rebuilt several fireplaces. The Society’s early work was not always historically accurate, but it set a precedent for historic inquiry and preservation that we still follow. 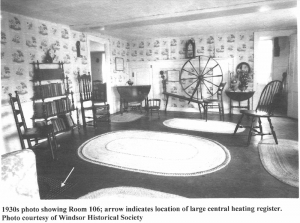 Tom Paske’s research has uncovered new questions about the Strong House. He found trace evidence of early plaster and wonders whether plaster walls were part of the original house or an early addition. He also questions whether the home’s ornate east doorway is original or a later addition.

Tom hopes that further research will answer these and other questions, but he knows that architectural research will never reveal every chapter in the house’s history. Colonial houses sometimes sat unfinished for years, lost historic details when additions were added, or were built with materials salvaged from other sources. These irregularities can taint a researcher’s data and make it impossible to determine indisputable facts about a historic house.

The Strong House still holds unanswered questions, but Tom and the Society are certain that the house is a rare survival of an 18th-century, middle-class house.

For complete details about their work, check out Tom Paske and his team’s full Historic Structures Report, as well as their accompanying Conditions Assessment Report, both available in our research library. The reports were completed in 2009.