How the Fyler House Became the Strong-Howard House, Part 2

Our House Saga Continues and a Strong Conclusion is Reached

This article was first published in May, 2000. We present it as it was originally written, with references to dates at the time.

Last year [1999], two architectural historians independently studied the construction methods and material of the home we’ve called The 1640 Lt. Walter Fyler House. Both surveys came to the same conclusion: there is no evidence to show that this is a 1640 house. Indeed, all features indicate that the earliest portion of the house was constructed sometime in the mid-1700s.

We now had to stand back and take a new look at our old house and ask, “Then who built it?”

It is our good fortune to have a volunteer who was willing to take on the task of answering that question. Bev Garvan likes a challenge, has a love of research, a thirst for fact and detail, and possesses the fortitude to carry on a long and exhausting hunt! She got on the trail tracking the truth through a maze of complicated land transactions, probate records, vital records, and family genealogies. The staff at the Windsor Town Clark’s office helped in the process as did volunteer Diane Cameron with her knowledge of locating probate records at the Connecticut State Library. In addition to more than 500 hours of her own research time, Bev enlisted the help of Fred Hesketh, an engineer, surveyor and historical researcher, who donated another 100 hours, raising some interesting questions himself and, in the end, confirming her work!

Where was Walter Fyler’s house? Bev researched the property from 1640 when, according to original land records, “the Plantation granted Sgt. Walter Fyler a parcel of land in the Palisade” (the protective palisado or stockade fort erected here in 1637). His land ran from “the Common Ground about the Meeting house” (the Palisado Green) down to the Rivulet (Farmington River). This lot contained a house, orchards and gardens. However, by following the deeds as this land was passed down and sold, Bev mapped and plotted, discovering that Walter Fyler’s home was on the portion of land south of where our little red house sits today, probably standing somewhere in the vicinity of our parking lot on the southern edge of the Society’s museum building. 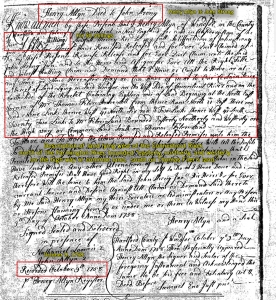 Photocopy of Town Hall’s land deed showing the sale of property from Henry Allyn to John Strong in 1758. Note there is no mention of a dwelling house on the land. 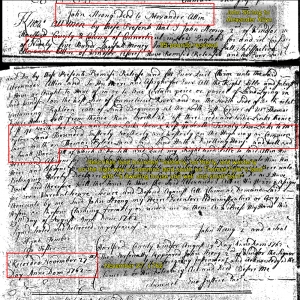 Land deed showing the sale of property from John Strong to Alexander Allin in 1762. Note the price of 95 pounds and inclusion of a dwelling house.

In summary, it is improbable that any house sat on the parcel that Henry Allyn sold for only 50 shillings. However, four years later in 1762, it is recorded that the property was sold at a dramatically higher price reflecting the dwelling house and barn that now sat upon it. This information, taken together with the mid-1700s building date that the architectural historians assigned to the earliest portion of the home, leads us to this Strong conclusion: It appears that John Strong, Jr. was the builder of our beloved little house!

Our library houses Bev’s entire report along with photocopies of her research documents. She traced the ownership of the property from the 1640 grant to Walter Fyler through a succession of owners and centuries. Her complicated pursuit touched on adjacent properties as well involving long-forgotten neighbors. The information is here for all who are interested! Our heartfelt thanks to Bev and Fred and all who contributed to this very important final product. 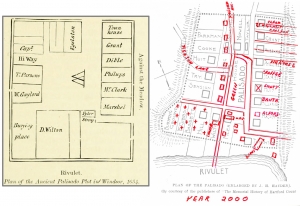 Left: map of the Palisado as it would have looked in 1654, drawn by Matthew Grant, town recorder. Right: map of the land distribution prior to 1650, overlaid with the houses and roads as they existed in 2000 (overlay by Bev Garvan). Both maps reproduced from Henry Reed Stiles’ History of Ancient Windsor.

John Strong, Jr. has suddenly become an important man in our lives. Unfortunately, he was also an elusive one. Thanks to research done by Bev Garvan, Diane Cameron, and Karen Parsons, we were able to get to know him (and his family) a little better.

We came to learn that our little house was built for newlyweds and the babies that would soon follow. John and Sarah Strong were married on August 1, 1758, the same year that John bought the property from Henry Allyn. This young man and woman were most likely acquainted at an early age as they were both born in Windsor (John in 1733 and Sarah in 1740). In fact, they were second cousins. Estate inventories show that their families possessed a fair amount of material wealth. John was the son of John Warham and Abigail (Thrall) Strong and would have grown up in the very neighborhood where he would settle with his young bride. Sarah was the daughter of Return and Sarah (Nicolls) Strong and lived just up the road on today’s Palisado Avenue.

Eleanor, John, and Sarah were the babies born to the young couple during the four years they resided in their new, gambrel-roofed home. At times it was undoubtedly a very noisy and bustling little house! However, there must have been desires to stretch out and move on for in 1762 this rapidly growing family headed off for an 80-acre farm in Torringford, the eastern portion of Torrington, CT. It was there that Sarah gave birth to two more babies and then died in 1765.

John went on to marry a young widow named Mercy Newel Root in 1769. They had seven children before she died in 1784. In 1786 John married for the third time to Annie Beecher, the aunt of noted clergyman, Lyman Beecher. Annie died in 1801.

All three of John’s wives were buried in the small Torringford Cemetery. In the following decade most of his children moved away. By 1812 he sold off the last of his farm and went to live with his son Pomeroy in Farmington, CT, where he died in 1815.

John obviously led a full and active life. In addition to the abundant and changing domestic roles, he led a distinguished military career which began during the French and Indian Wars and continued throughout the Revolutionary War. By 1783 he had achieved the rank of Lieutenant Colonel. In Windsor, however, he (and Sarah) will most likely be remembered as the builders of our little gambrel-roofed house.

There still more to the story of discovering the history of the Strong-Howard House. Continued next week! Back to Part 1. 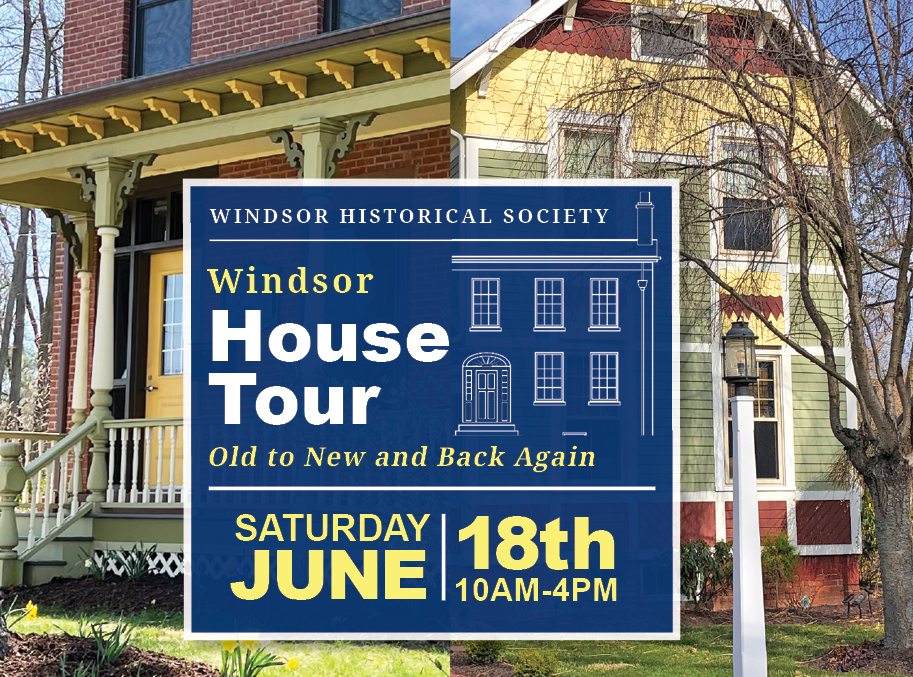 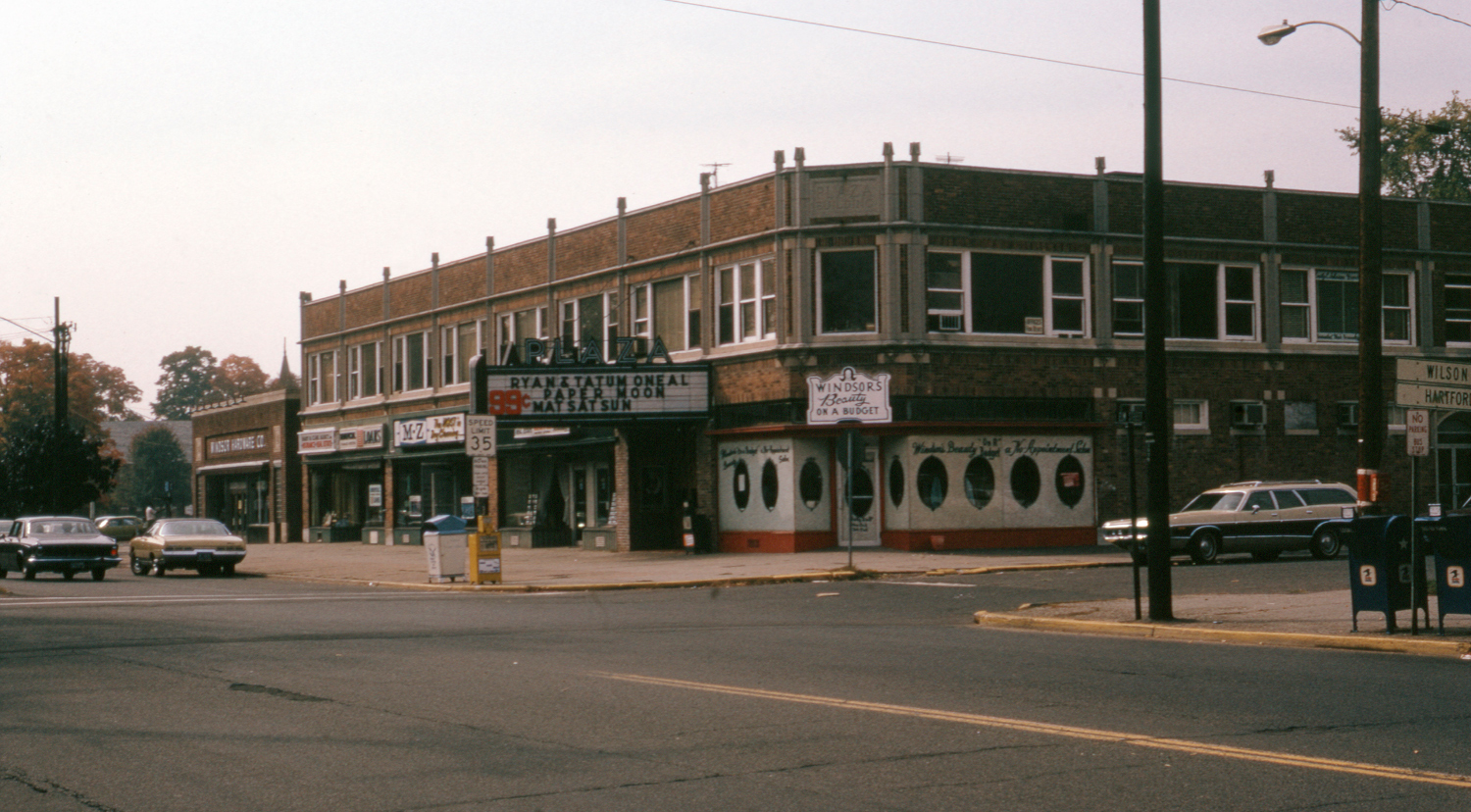 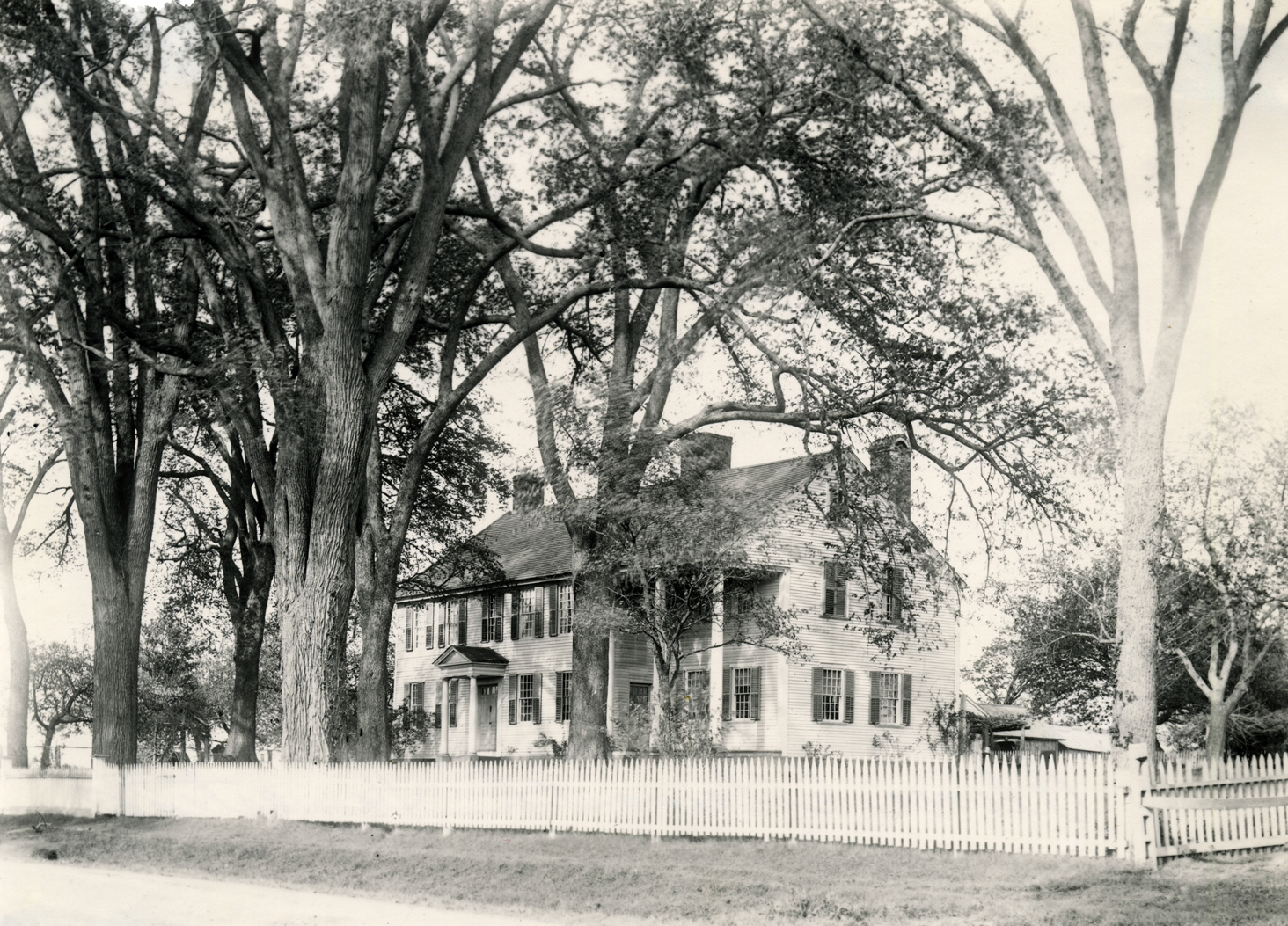