Because it’s unlikely we’ll be able to host our spring field trips this year, we’d like to share a few activities from our 5th grade American Revolution field trip that teachers can use with their students.

Lesson 1: How did spies help America win the Revolutionary War? 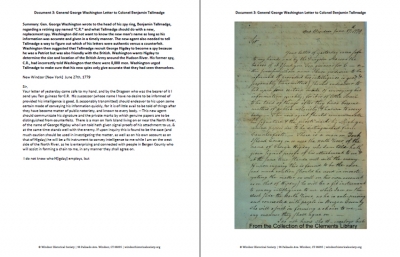 During the American Revolution the Continental army didn’t have the strength to face the British army in direct confrontations. Because of this espionage (spying) became a very important asset for George Washington and his officers. Both American and British spies were active throughout the colonies during the war.

These files contain a variety of messages written by spies during the war and an analysis worksheet that contains questions about the documents.

Have your students use one or more of these documents to answer the questions on the analysis worksheet.

Lesson 2: Tradecraft: How spies sent messages in the Revolutionary War 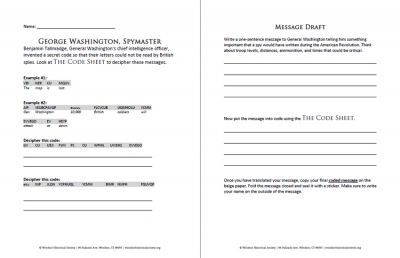 Invisible ink was used by spies in both the British and American militaries. It usually consisted of a mixture of ferrous sulfate (iron salt) and water. Spies would write with the invisible ink in between the lines of letters they sent or in the margins of books they mailed. The invisible text could then be revealed by applying heat or chemicals to the paper.

Cryptography, or codewriting, was also used by spies when writing messages that they didn’t want to be discovered.

Benjamin Tallmadge was George Washington’s chief spymaster during the American Revolution. During the war the British found out that American spies were using invisible ink and started discovered the method to reveal their messages. In response Tallmadge and his circle of spies started using a secret code instead of invisible ink.

Tallmadge’s code was very complex. Messages would consist of numbers that matched up with different words using a decoding sheet. Messages would be sent as numbers and then decoded into words. Also if there wasn’t a number for a specific word then the letters that made up the word would be hidden as different letters.

Today we’re going to get to learn the part of Tallmadge’s code that deals with letters.

Back to For Teachers

Admission and tours at Windsor Historical Society are free for teachers. Stop by during our public hours for a tour of our historic houses or schedule a meeting with our Program Director, Melanie Stringer, who can speak to you about the educational programming opportunities we offer.