Historical Markers: Doorways to Windsor’s Past 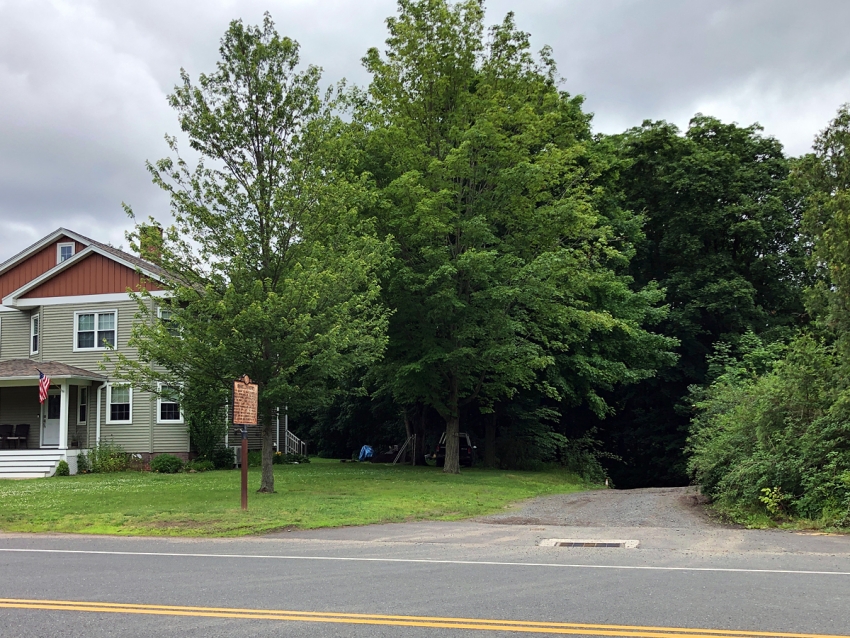 Bissell’s Ferry historic marker on Palisado Ave., adjacent to the road to where the old ferry landing used to be. WHS collections 2017.34.34, photo by Michelle Tom.

Near the northern edge of the Windsor Historic District, on the east side of Palisado Avenue, stands a marker proudly proclaiming the entrance to Bissell Ferry Road. Tucked in between two nearby homes, the unpaved road would be easily overlooked if not for this sign. This modest reminder is all that is left to commemorate a vital spot in Windsor’s long history.

John Bissell began operating the ferry crossing the Connecticut River in 1641 and collected tolls from travelers. In January 1649 the established rates to cross the river were eight pence per horse, two pence per person traveling with a horse or with another passenger, and three pence per person traveling without a horse. Bissell was also permitted to provide overnight accommodations to passengers who could not stay at the local tavern. In 1677 the family moved the crossing point south to the present location of Bissell Ferry Road. Travelers turned off the main road, maneuvered down the hill, and trekked nearly half a mile eastward through farmland to get to the ferry that operated “from brak of day to evening shut.”

The Society has on exhibit the large cast iron bell that passengers would ring to call the ferry to the east bank. In the mid-1920s, after two-and-a-half centuries, the ferry ceased its crossing of the Connecticut River. Trains, trolleys, and cars had eclipsed the ferry as the preferred method of transportation, but the importance of the historic crossing was not forgotten. 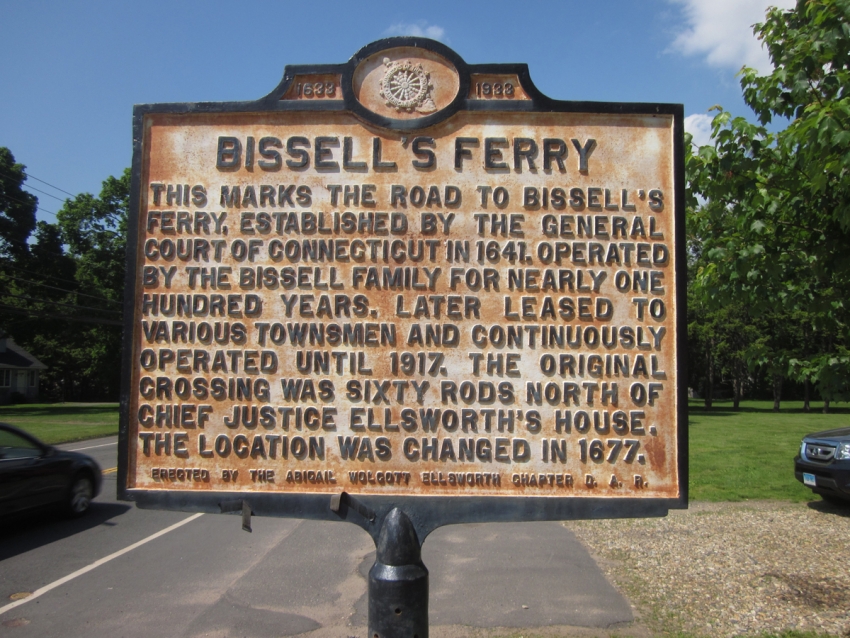 In September 1932, the Abigail Wolcott Ellsworth Chapter of the Daughters of the American Revolution began the process of erecting a marker for the Bissell Ferry along Palisado Avenue. They also intended to highlight the location of Warham’s Mill on Poquonock Avenue, the Old Stone Fort, and the spot where Thomas Hooker crossed the Connecticut River. Although the latter sign was never constructed, they unveiled the markers for the three Windsor locations on June 20, 1933. According to an article in the Hartford Courant, ten-year-olds Mary Ellsworth (Ransom) and Priscilla Huntington (Silliman) had the honor of pulling down the curtains covering the signs. Daniel Howard, then president of the Windsor Historical Society, gave a speech on the achievements of three centuries of Windsor residents, and Miss Jennie Loomis presented the histories of the three locations. The Abigail Wolcott Ellsworth Chapter donated these markers as their contribution to the town’s tercentenary celebration.

Today, the two-sided plaques for Warham’s Mill and the Bissell Ferry remain as they were in 1933, with a white ground and medallion at the top with the seal of the Daughters of the American Revolution. It is a testament to Windsor drivers that these two markers have survived relatively unscathed for the last 80+ years. 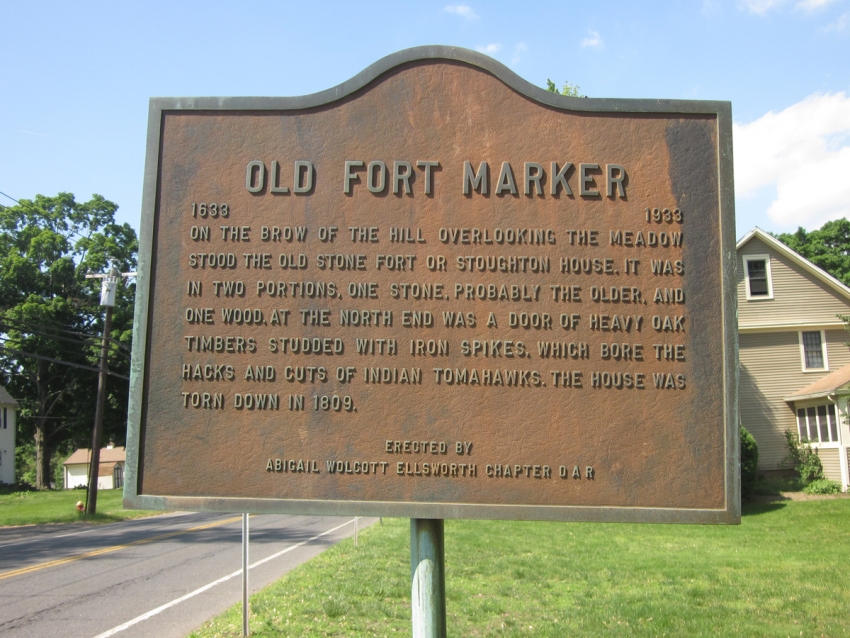 Like the building that it remembers, the marker for the Old Stone Fort has not been as lucky. At some point between 1933 and 1966, the plaque was destroyed. But in 1966, the Abigail Wolcott Ellsworth Chapter again erected a marker to honor the spot where the 17th-century building once stood. The replacement marker is not as elaborate as its 1933 predecessor, nor is it two-sided. Even so, the ladies of the DAR hosted a celebration for its re-dedication that included town officials, a speech by William W.C. Ball, and a trumpet solo. 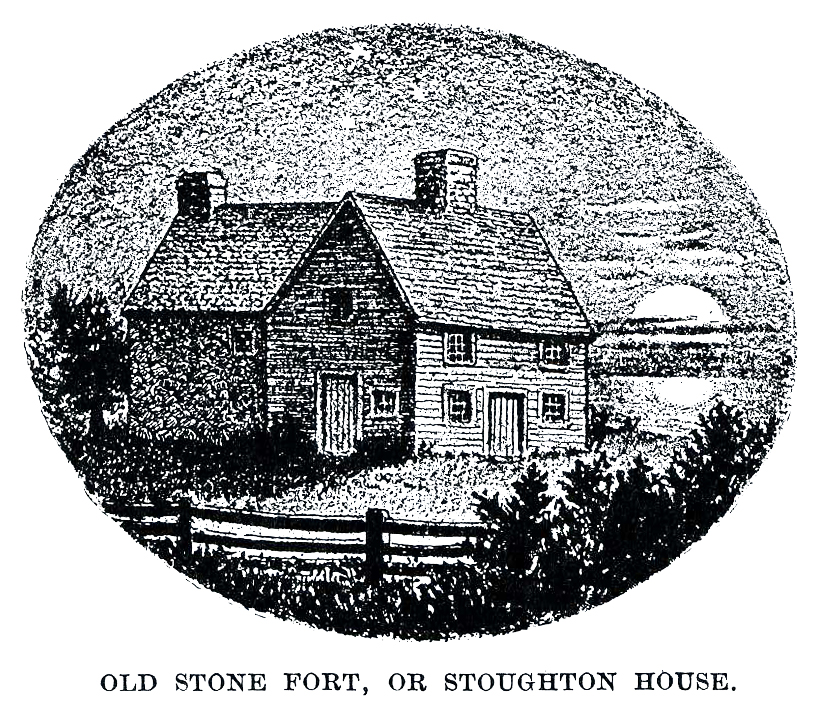 It is a tribute to Windsor’s long memory that they erected a marker for this building in the first place. The Old Stone Fort, or the Stoughton House, was a 17th-century structure standing back from the main road on the edge of the hill down to the meadows. Much of what we know about the house comes from a transcription of a document written by Oliver Ellsworth, Jr. in 1802 and published in Henry Stiles’ The History and Genealogies of Ancient Windsor in 1891. Ellsworth wrote that the “ancient building is still inhabited and in a pretty good state of preservation” and that the chimney was marked 1669. First constructed by Thomas and Mary Stoughton, it had a stone section on the north side and wooden frame addition on the south. According to Stiles, one of the large doors to the home had “if we may credit tradition, sundry suggestive hacks and cuts of Indian tomahawks.” The “tradition” is unfounded as Windsor was never directly attacked by Native Americans, but the name “Old Stone Fort” does imply that the structure was meant to protect its 17th-century inhabitants who likely felt threatened after raids on nearby towns.

By 1802 the building was a relic and curiosity, and Stiles wrote that the building was torn down in 1809. The Society has in its collection some diamond-shaped pieces of glass believed to be salvaged from the structure’s windows. How Stiles arrived at this 1809 date is unknown, but when he published his text so many years later, he noted that it was “only remembered by Miss Lucretia Stiles, and one or two other very aged persons.” Because Stiles captured this information before that elderly generation passed away, the details of the building were kept alive in Windsor’s memory and could be celebrated almost 125 years after the building was destroyed. Warham’s Mill, the Bissell Ferry, and the Old Stone Fort are not Windsor’s only 17th-century landmarks. But they are places where Windsor’s present residents actively remember its past and look forward to the future.