“Carried to the park in hundreds of automobiles, carriages, and trolley cars, nearly 6,000 people started gathering at the track before noon and at 1 o’clock, when the first race was scheduled to be called, the grandstand was filled to its capacity and the home stretch was lined with automobiles of every make and description. When the first race was started, the fence on each side of the track was hidden by hundreds of “railbirds.” Twenty-one heats were battled during the afternoon and the record crowd watched for over six hours while the trotters and pacers fought for supremacy over the memorable twice-around.” – Hartford Courant, July 4, 1917

The above article describes a day at the races during the second year of Sage Park’s participation in the Bay State Short Ship Circuit of light harness horse racing. Drivers and owners came to Windsor from all over the northeast and as far away as central Pennsylvania to participate in the trotting and pacing events (terms that describe horses’ different gaits). The park had enough stables to quarter over 100 horses, but that was not enough to accommodate all the drivers, horses, and equipment converging upon our little town. The overflow had to find housing in nearby barns and tobacco sheds. 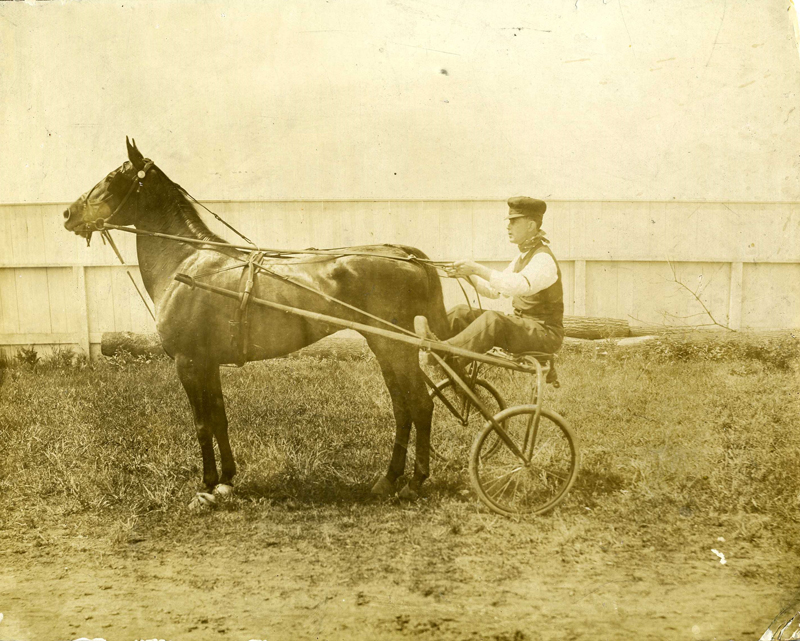 A score card from the day shows the first pacing race had a purse of $1,000, and scribblings of numbers on the card demonstrate that the original owner was serious about making his fortune that day. It has a deep crease down the middle where it would have been folded to fit in a suit jacket pocket, formal wear being the sartorial choice of horse race spectators.

Twenty four years before this pinnacle moment in Windsor’s racing history, horse owners lacked a formal track and would race along normally quiet and residential Palisado Avenue. Enterprising fans thought Windsor ought to have its own racing park. They formed a joint stock company and Orson B. Moore donated a wood lot south of Capen Street for a park. Considerable effort was made to pull up tree stumps and roots and groom the soil until the grade was absolutely flat. Moore’s Park opened to the public in 1893. 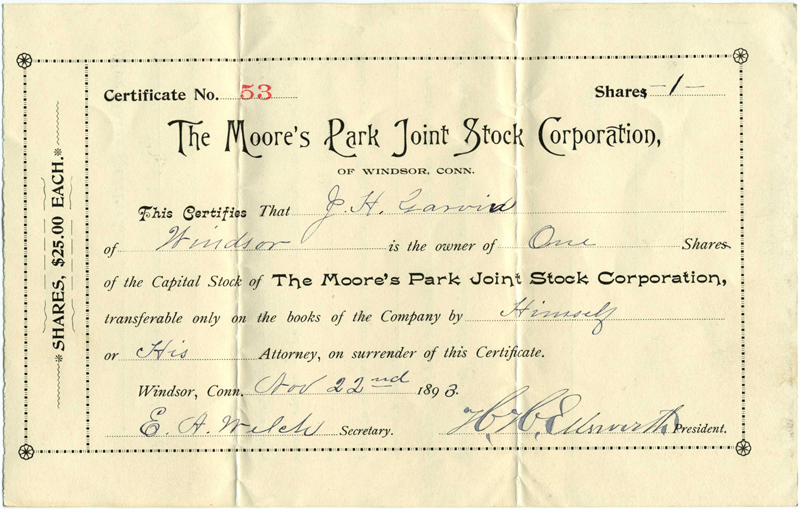 During its early years, Moore’s Park hosted agricultural fairs while interest in racing waxed and waned. In 1913 the sport picked up in Windsor when Louise H. Sage, a lifelong horse enthusiast (and incidentally, mother of Jerome E. Sage, co-founder of the Sage Allen retail store), renovated the park. She originally assumed the mortgage on the property in 1899, and then leased it to the Free-For-All Driving Club, which made some repairs to the space. It took 14 more years for Sage to decide that the place needed a complete makeover. Spectators gather on the infield and the grandstand for a sulky race. The Sage Park entrance sign can be seen in the background. Early-20th century. WHS collections 1954.2.4.200, photo by William S. Leek

She arranged to build a new grandstand, new stables, a track with more precise curves, and exactly parallel straightaways. Thanks to her improvements, the track became known as “New England’s Greatest Half-Mile Track” (so-dubbed by The Trotter and Pacer magazine), and was renamed Sage Park. At the time, the Hartford Courant surmised that Louise Sage was probably the only female sole-owner of a racetrack in the country. Unfortunately she did not live long enough to experience the heyday of organized light harness racing on her track. After her death in 1916, Windsor farmer and horse owner Fred H. Thrall bought the park. As demonstrated by the fervor of the 1917 race, Thrall was about to reap the fruits of Louise Sage’s contributions to racing in Windsor. He oversaw the beginning of participation in the esteemed Bay State Short Ship Circuit. Subsequent park owner Allan J. Wilson brought in races with purses of $10,000, and crowds of thousands routinely poured onto the infield and packed the grandstand to take in the games.

But this fame was not to last forever. In 1935, after years of popular but unregulated gambling on horse races in the circuit at Sage Park, a bill to legalize race track betting made its way through the Connecticut state legislature. Despite having overwhelming support in the Senate, the House only barely passed it and ultimately Governor Wilbur L. Cross vetoed the bill. This effectively sealed Sage Park’s fate and marked the beginning of the end of the sport in Connecticut.

For two brief weeks in August of 1934, a Boston promoter named Dick Dunn held automobile races at Sage Park. However, noise and dust complaints from neighbors, and more seriously, the death of a driver, Hal French, led to the quick ban of car racing in Windsor. Every so often, rodeos, horse shows, and other special events would utilize the space, but for the most part the park was used for training and boarding horses. A pair of fires in 1937 and 1943 destroyed stables, and after that, the grandstand was left to the vines and weeds, while tall grass slowly obscured the track altogether. Eventually, in 1946, final owner Elizabeth Wilson sold the Sage Park property to the town of Windsor’s Public Building Commission, which intended to build a junior-senior high school on the site. 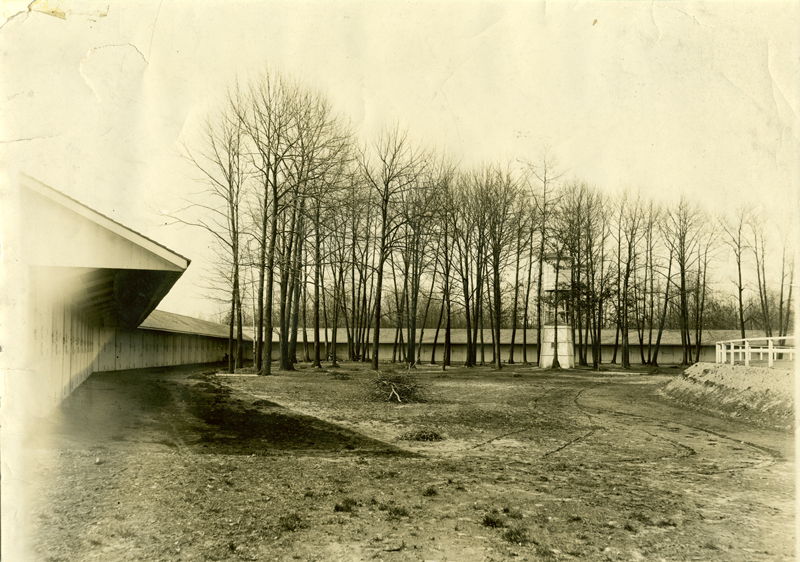 Since the 1950s, the echoes of bells that rang to herald the start of race day can be heard in the bells signaling the end of a class. Students chatting in hallways and training on the running track  follow the path of the horses and walk in the footsteps of racing fans, who, a century earlier, flocked to Windsor for surges of adrenaline and a chance at striking it rich, courtesy of horses like Hollywood Walker and Friscoe Worthy flying around the oval at Sage Park racetrack.