The 1790s and early 1800s were transformative years for craftsmen in the greater Hartford region of Connecticut. The area’s economy boomed in the 1790s and then quickly retracted during the run up to the War of 1812. Businesses had to negotiate a growing labor pool, new technologies, and demand from consumers for goods in the latest fashions. The increased competition proved to be too much for some shops, while others relocated or adapted quickly and flourished well into the 19th century. Cabinetmaker George Belden’s shop in Windsor is one of the successful business stories now coming to light.

George Belden (1770-1838), born in Wethersfield, trained to become a cabinetmaker in Hartford, likely in the shop of Aaron Chapin. The Wadsworth Atheneum has in its collection a desk-and-bookcase signed “George Belden, Hartford, May 6, 1791” that Belden probably made during the final year of his apprenticeship. Although the formal indenture for his apprenticeship does not survive, the 1790 census shows two additional males over 16 years old in Chapin’s home. Belden would have attained his majority in November 1791 when he turned 21. After his apprenticeship, Belden likely stayed in Hartford and continued to work with Aaron Chapin. But, in May 1793, George Belden advertised that he “carries on the CABINET MAKING Business ten rods north of the new Bridge in Windsor.”

In 1794 George Belden began an account with Jerijah Barber, Jr., Windsor’s premier tanner whose account books are stored in the Windsor Historical Society’s archives. Belden purchased a pair of men’s shoes and several straps of leather on credit from Barber. Barber then used these items as partial payment for the bedstead, two coffins, and currying face board he purchased from Belden in 1795. The two continued doing business with each other until Barber’s death in 1819. 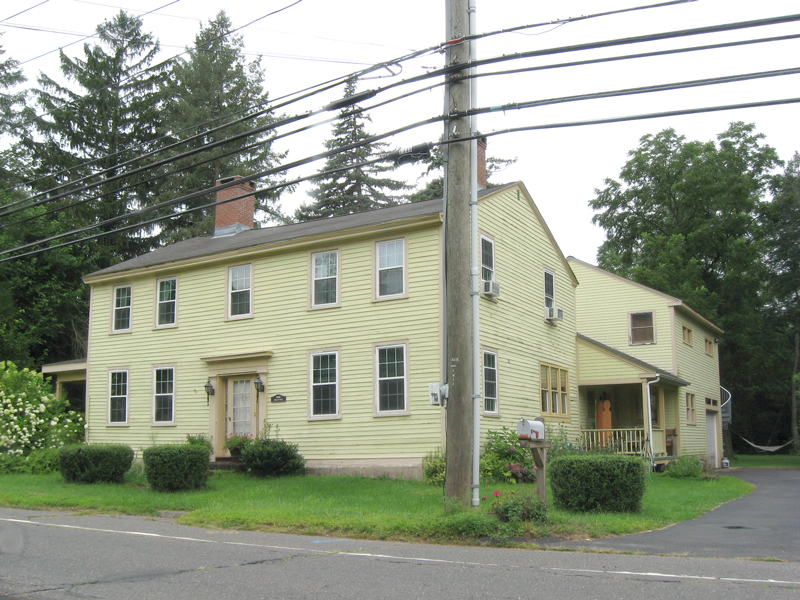 By 1795 Belden had firmly established himself in Windsor. The town taxed him for a minor, most likely an apprentice, working with him in his shop. And in November of that year, he purchased the home of Ethan Barker, a Windsor joiner and Methodist preacher. Still standing at 335 Palisado Avenue, this house would be Belden’s home for the next 37 years. In July 1796 the almost-26-year-old Belden married Hannah Porter (d. 1834), daughter of Daniel and Harriet Porter, living right down the street from him. 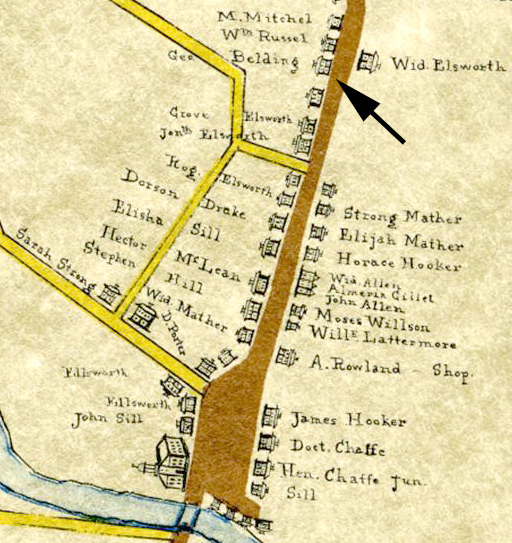 As Belden’s family grew, so too did his business. In 1800 the town again taxed him for an apprentice. And, Jerijah Barber also continued to commission work from the cabinetmaker conveniently located just north of the Farmington River bridge. When Jerijah Barber’s younger sister, Rhoda, married Roger Phelps in October 1803, George Belden crafted her dowry furniture including six cherry chairs, two swelled-front bureaus, a high post bedstead and tester frame, a low post bed, a large dining table, an oval breakfast table, a toilet table, a common candlestand, and an inlaid candlestand.

It is this inlaid candlestand and the six cherry chairs that drive home how Belden was able to adapt and survive in an increasingly competitive furniture market. Belden did not learn how to inlay designs into furniture during his apprenticeship in Hartford. The style did not become popular in this area until around 1800. But based on this evidence, Belden taught himself how to make the new style of furniture that his customers wanted for their homes. The cherry chairs, although not listed as inlaid, were also likely made in the new fashion. Rhoda Barber Phelps’ great-granddaughter, Marguerite Mills, donated three cherry chairs to the Society that are inscribed “Rhoda Barber 1802.” Although the later label is a year off, these heart-backed cherry chairs with inlaid decoration look like Belden’s attempt at the newest style. 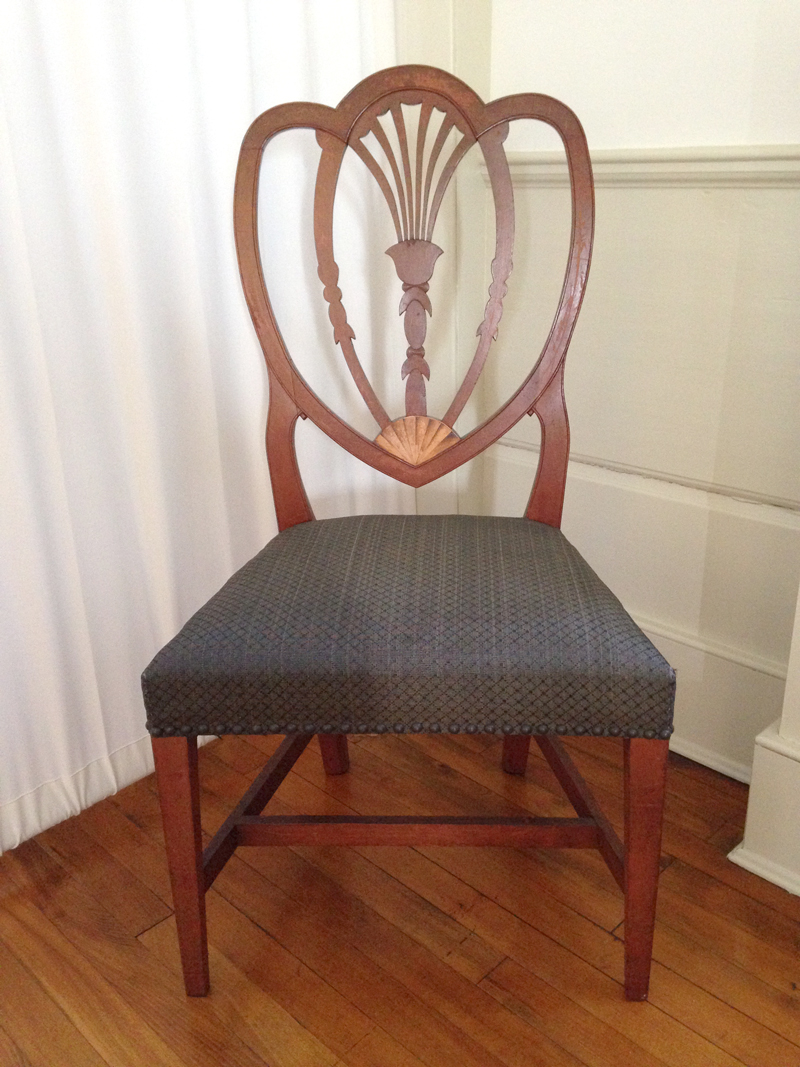 Jerijah Barber died in 1819, thus ending his account with George Belden, but Belden remained in Windsor until 1832. In that year, he sold his house and likely moved in with one of his children. His wife died in 1834, and George Belden passed away in 1838. After working in Windsor for almost 40 years, it is surprising that so few pieces of furniture are labeled by him. The current total of five includes the 1791 desk-and-bookcase and a chest of drawers, both of which were made in Hartford, and another desk-and-bookcase that was owned in Kentucky in 1962. We also know of a slant-lid desk and a chest of drawers made in Windsor. The three Rhoda Barber Phelps’ chairs, although unsigned, would be a significant addition to George Belden’s known output and show how he transitioned his business from the 18th century into the 19th century.