How the Fyler House Became the Strong-Howard House, Part 1

The north side of 96 Palisado Avenue, thought to be taken prior to the demolition of the western chimney (visible on the right side of the photograph), c1887. WHS collections 1922.11.1.

One question that the Windsor Historical Society receives over and over is, “Why did they re-name the Fyler House?” In particular, this comes from folks who remember the Fyler House fondly from visiting it in their youths, and from Fyler family descendants.

It wasn’t an easy decision. You can read an overview of the (re)naming process here. But for a more detailed walk through the research and discovery process, we’re re-publishing a series of articles that originally came from our newsletters during the time the researching and discovering was actually happening. We present these articles as they were written, with references to dates at the time.

This article was originally published in November, 1999.

The most frequently perused book in our research library is The History and Genealogies of Ancient Windsor, by Henry Reed Stiles. This author has been revered for his extensive work and is often used as a source by others. In an 1886 letter to The Windsor Herald, he wrote about “a little low-browed five-gable home at the lower corner of that ancient green—built long years agone by Sgt. Fyler…” The house to which he refers is, of course, the beloved and rambling structure that sits on the Palisado Green and has been called the Fyler House for generations. The Society proudly purchased this historic dwelling in 1925 and continued on with the established assumptions about the original builder of the home. 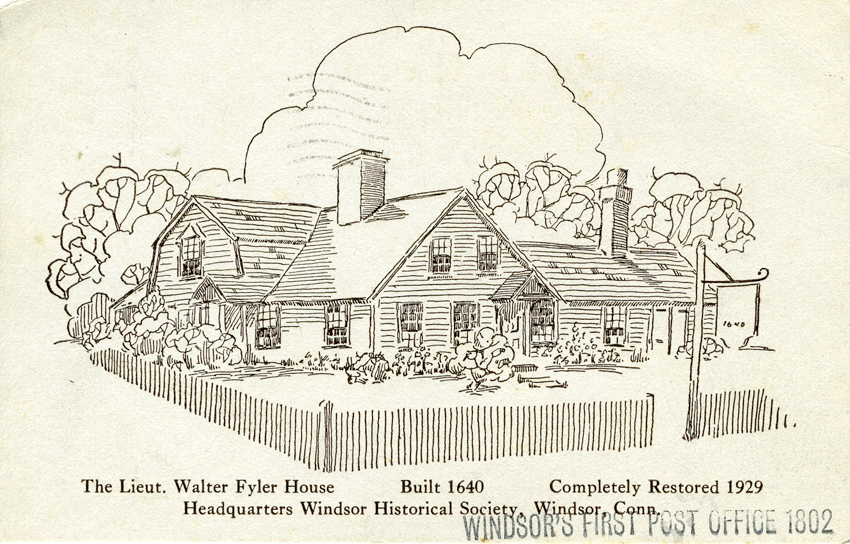 Commemorative postcard on the occasion of the dedication of a new post office, 1941. WHS collections 2014.42.49.

Why? Not surprisingly, there are multiple reasons for holding on to cherished beliefs. First of all, it was widely accepted as fact by generations of notable people associated with local history that our homestead was indeed built by Walter Fyler. Secondly, the Windsor Historical Society was formed during the Colonial Revival era when romanticized versions of the past were particularly appealing. As time went on, a copy of Walter Fyler’s estate inventory was obtained from the State Library. It listed a home whose room layout was identical to the original gambrel-roofed portion of the house thought to have been built by Walter; and this further cemented those earlier assumptions. This year [1999], however, has brought new knowledge as well as a new acceptance of questioning those cherished beliefs.

Last January [1999] we hired two separate architectural historians to look at the homestead. Our Collections Committee was particularly concerned about the old windows and the condition of the house, which is in itself a truly special Windsor artifact. In addition to advising us on needed repairs, a study of the structure would provide an opportunity to officially date the house and help with our interpretation of it. It is important to note that the house’s 1640 date has not gone unchallenged in the Society’s history. A book in our own collection, Connecticut River Valley Doorways: An Eighteenth Century Flowering by Amelia Miller (1983) reports that research done earlier by William L. Warren dates the dwelling to the mid-1700s. In the two separate and unaffiliated surveys done this year, we have learned that the house does indeed date to the mid-1700s and not 1640 as previously assumed!

As already noted, we are facing new visions and challenges for the millennium, and the reinterpretation of our prized homestead is one of them. The Fyler family descendants come to mind immediately. Although we now know that the house was not lived in by members of their family, we are mindful that the property it sits on is still very much a part of the land that was granted to Walter Fyler and lived upon by several generations of his offspring. The question of “what will we call the house?” will be answered after the completion of the very detailed land record and genealogical research being conducted by volunteer Bev Garvan.

The story continues next week!