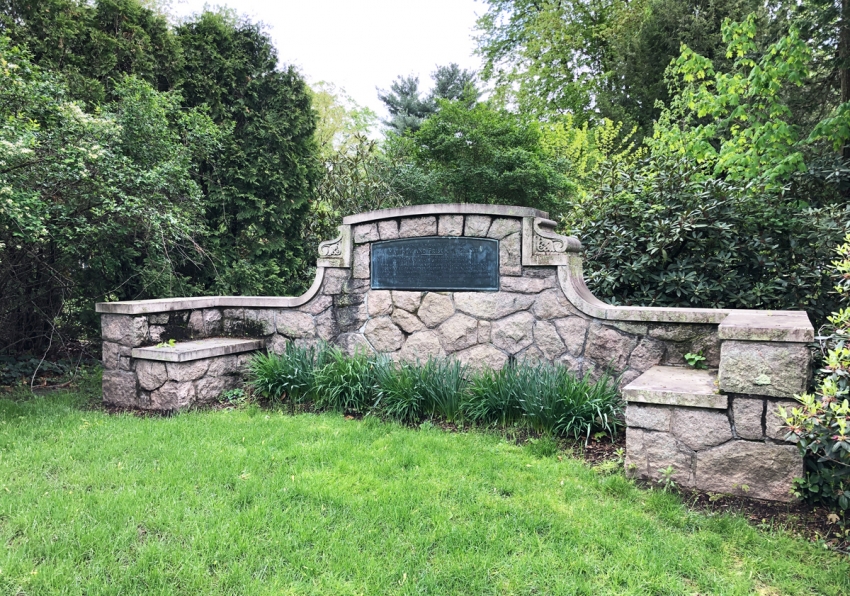 For students of Windsor’s early history, there are few figures more important than Matthew Grant. It is thanks in large part to his careful record keeping during his years as town clerk that we are able to piece together much of our information about Windsor’s beginnings. Historian Henry R. Stiles said it best, writing, Grant’s “early records of the town show that his duties were always conscientiously performed.”1 Conscientious is the word most often used to describe Grant’s personality. 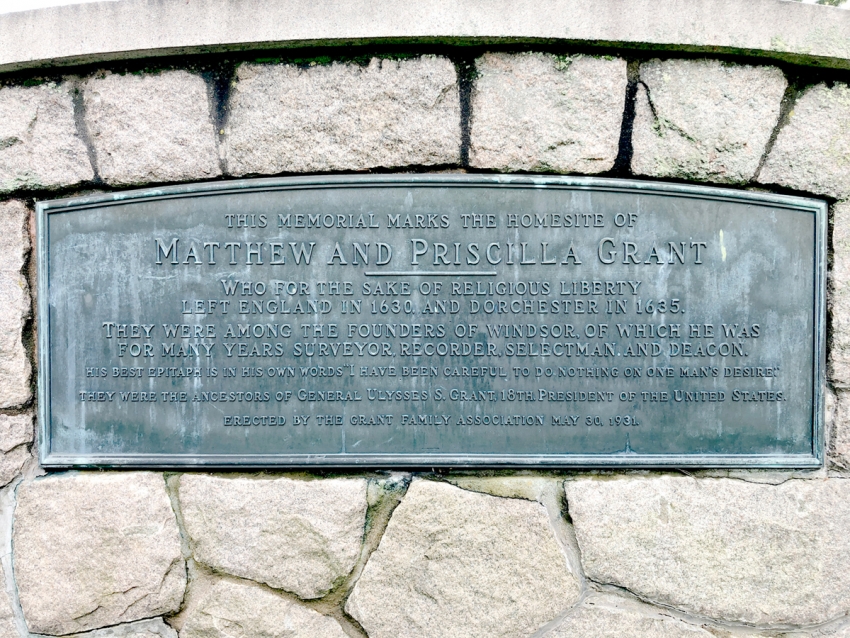 Close-up of the plaque on the Matthew and Priscilla Grant monument. Photo by Michelle Tom.

According to Grant’s own family register, he was born October 27, 1601, “Tusdaye”. He married his first wife, Priscilla, in 1625, and their daughter, also Priscilla, was born in 1626. Together, they sailed for Dorchester, MA in 1630, probably aboard the Mary and John. Matthew and Priscilla had four sons, Matthew, Samuel, Tahan, and John. In Windsor, the family lived on a large lot inside the Palisado, but like many of his compatriots, Grant gave up much of that land during the Pequot War (1636-1638) so that his neighbors could build safer homes inside the palisade walls. Grant was appointed to care for the town house and orchard in the lot adjoining his own. Following his first wife’s death in 1644, he married Susanna Capen Rockwell in 1645. 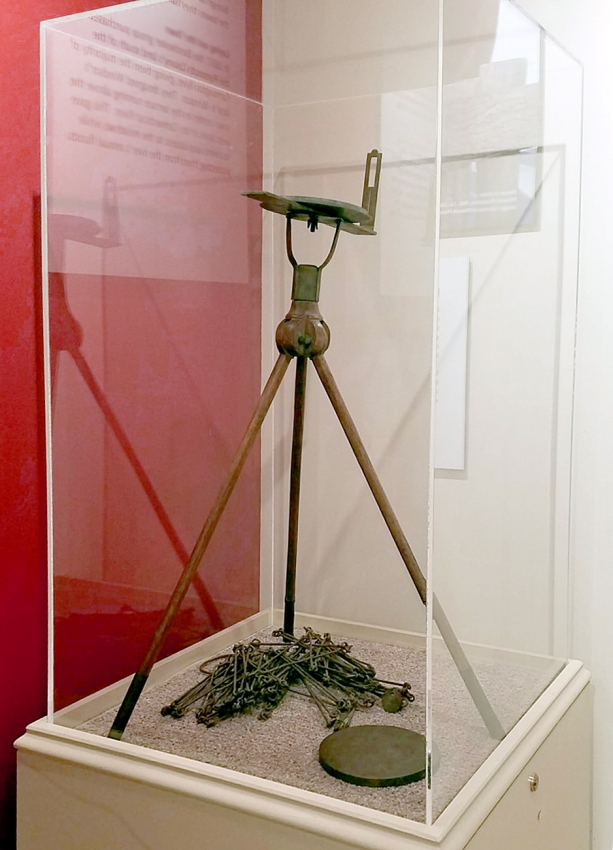 Surveying equipment (brass and wood compass and chain), ownership attributed to Matthew Grant. On display in our museum gallery. On loan from the Wadsworth Atheneum, F64.17.

Grant was among the first of the Dorchester group to come to Windsor, beginning to survey the first lots in the Great Meadow here in September 1635. Grant continued in the role of surveyor for many years. As he himself wrote in a 1675 deposition, “I have been employed in the measuring of land and getting out of lots to men, which has been done by me from our first beginning here, come next September is 40 years.”2 By all accounts, he was a skilled surveyor. Surveying equipment, believed to have belonged to Matthew Grant, is on display in Windsor Historical Society’s North Gallery.

In addition to his work as surveyor, Grant served the town as a jurist. In part because of that duty, he had connections to two of Connecticut’s early witchcraft cases. In 1651, Grant served on the jury for the trial of Thomas Allyn, who accidentally shot and killed Henry Stiles during a training exercise. Grant and the other jurors on the case at the time found Allyn guilty, but several years later another jury overturned his conviction and instead found neighbor Lydia Gilbert guilty of using witchcraft to cause Stiles’s death.

Grant’s more famous witchcraft connection comes from his compulsion to write down important events in the town’s history. A note written in his personal diary names the first woman hanged for witchcraft in New England. It reads: “May 26 47 Alse Young was hanged” and goes on to list the hanging deaths of John Newberry (for beastiality) and the Carringtons (also for witchcraft). Were it not for Grant, we might never have known who Alse Young was.

Grant’s most notable role was as town clerk, a position he held from 1652 until 1677. He succeeded Bray Rossiter in the appointment. The town records are full of examples of Grant’s diligent attention to his duties. He appears to have understood his place in shaping the history of the settlement. Not only did he record events that occurred during his time as town clerk, he also recorded prior occurrences in the town which he believed were of significance. In addition to earlier births, deaths, marriages, and church memberships, he recorded in detail the great flood of March 1638/9, when “ye waters rose verey hoy more than euer had ben knowen by ye Indans. It drowned many howses verey deep.”3 The flood forced many families to relocate their homes to higher ground. 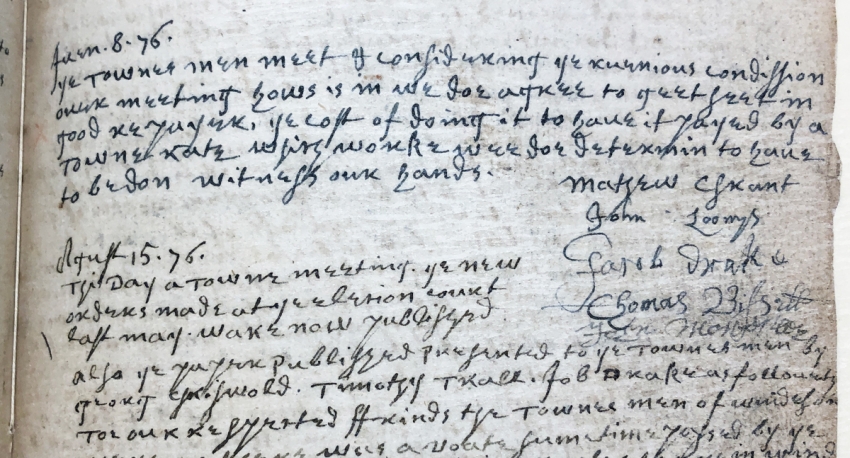 Page from Town Acts Layouts of Lots, 1650-1714, in Grant’s handwriting, with his signature. The top entry talks about the townsmen meeting to consider the “ruinous condition our meeting house is in”. Courtesy of the Town of Windsor, Town Clerk’s office.

Grant also made corrections to the work of his predecessor, Bray Rossitter. In January 1659, Grant wrote a note in the Windsor Land Records that states, “When this book was delivered to Matthew Grant to Keep, and order the Record of Land for the Town, in August 20th 1652, he found that the page where his Land was Entered was rent out and Lost by the former Registrar.”4 He set about correcting the omission. Later, in 1668, Grant allowed George Griswold to write a note in the town records regarding dissent in town between two ministers, Reverend Warham and Reverend Woodbridge, who had both been granted permission to preach on the Sabbath. Grant clearly sided with Warham as minister of the original church, but felt compelled to let Griswold make a note in the records, which Grant followed with his own note, reading in part: “I told him I would not have no hand [sic] in the business, nor enter their vote. Then he desired me to let him have the town Book…He being a townsman I laid the Book upon the table, and there he wrote himself what is entered by his own hand.”5 Grant may not have been impartial, but he was rigorous and thorough.

What comes through most in Grant’s writing is that he cared deeply about the justness of his own work and the success of Windsor as a settlement. In the same 1675 deposition mentioned earlier, Grant said, “I have been careful to do nothing upon one man’s desire.”6 He worked to act only upon the wishes of the magistrates and in the town’s best interest. Thanks to Matthew Grant’s diligence and sense of purpose, we are able to more fully understand Windsor’s long, rich history today.