The remains of Scrooby Manor in Nottinghamshire, England, where Jonathan Brewster was born. Photo copyrighted by and used courtesy of Sue Allan, Mayflower Research Historian.

Windsor founder Jonathan Brewster’s time in our town was brief, but pivotal. He was appointed Plymouth Colony’s resident agent here, arriving some months (or years) prior to July of 1635, when he penned a letter to Governor William Bradford, expressing his concern over the influx of newcomers into the fledgling settlement. He wrote, “Ye Massachusetts men are coming almost dayly…some have a great mind to ye place we are upon, and which was last bought…I shall doe what I can to withstand them.” 1 Bradford wrote begrudgingly that in the end, “for peace sake”, Plymouth sold all but 1/16th of its Windsor holdings to the Dorchester group in May of 1637. Plymouth retained the trading house, some land around the house, plus some land near New-Towne (now Hartford). Jonathan Brewster was among the signers of this agreement.

It was also from Windsor, in June of 1636, that Brewster wrote to John Winthrop, Jr., warning that, “the Pequents have some mistrust that the English will shortly come against them.”2 This message portended the Pequot War, which in part was sparked by the death of Brewster’s own brother-in-law, John Oldham. Later in 1636, Brewster was back in Plymouth Colony, and by 1637 was a commissioner in the Pequot War. 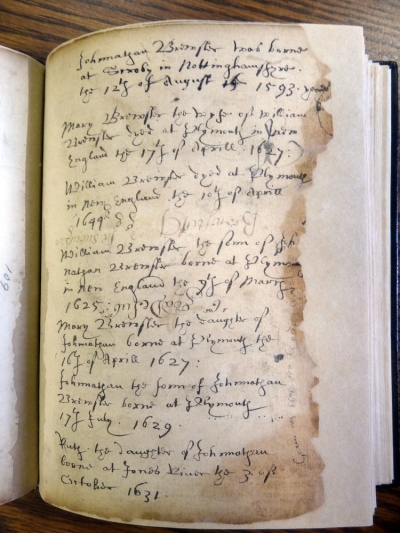 A page from the “Brewster Book,” containing some of the family birth and death records for William and Mary Brewster and their children. Photo courtesy of mayflowerhistory.com.

Jonathan Brewster was the eldest son of Plymouth Plantation leading light William Brewster. Born at Scrooby, Nottinghamshire on August 12, 1593, Jonathan moved with the family to Leiden, Holland when they fled there in 1608 seeking religious freedom. In Holland, Jonathan became a merchant and ribbon weaver who exported his wares to England. When his parents and brothers Love and Wrestling boarded the Mayflower in 1620, Jonathan stayed behind. Jonathan was one of what Bradford called the “lusty yonge men” who arrived at Cape Cod aboard the ship Fortune in November of 1621.3

In 1624, in Plymouth, he married Lucretia Oldham. They moved to Duxbury about 1630, becoming quite prominent there. Brewster was a trader, working up and down the coast as far south as Virginia. His subsequent appointment by Governor Bradford as resident agent at Windsor showed confidence in his leadership abilities. After his time in Windsor, he returned to Duxbury, eventually selling his landholdings there in settlement of debts to his business partners Mr. John Holland and Mr. Hopestill Foster.

Afterward, about 1649, he settled in New London, soon establishing his trading post on Brewster’s Neck, along the Thames River, on land granted him by Mohegan sachem Uncas. The area is now part of Preston, Connecticut. The trading post opened without the permission of the Connecticut magistrates, causing Brewster a bit of trouble in the courts before the post was confirmed. He continued there for the remainder of his life.

During his time in Windsor, Brewster began corresponding with John Winthrop, Jr., with whom he shared an interest in alchemy. Brewster had an alchemical laboratory in his home at Brewster’s Neck. In 1656, he believed he was close to discovering the universal cure, a common goal among alchemists. He shared the progress of his experiments with Winthrop, saying, “I ffeare I shall not live to see it finished, in regard partly of the Indianes, who I feare will raise warres; and also I have a conceite that God sees me not worthy of a blessing by reason of my manifold miscariadges.” Brewster worried not only that his life might be in jeopardy, but also that some accident would upset his experiments, which needed to sit undisturbed for years at a time. Typically Puritan, he worried that he was not Christian enough to receive the divine alchemical secrets he sought. Writing that he trusted Winthrop with his research more than his own children, Brewster promised he would “shortly write all the whole worke in few words, plainly … & sealle it vp in a littel box, & subscribe it to your selfe… that if it please God I should suddainly be taken away, you may call for it.”4 Ultimately, it appears Brewster’s experiments were unsuccessful. His letters to Winthrop, however, provide a fascinating window into the minds of our New England forefathers.5

While Jonathan Brewster’s encounters with Native Americans do not seem to have affected his alchemy, later events suggest he was right to be nervous about his family’s safety. In early March of 1659, while Brewster was away in Hartford, “12 [Narragansett] Indians came suddainly out of the bushes” surrounding Brewster’s farm, and ran toward Mrs. Brewster, who was working in a field with one Mohegan and two English servants. Seemingly to shield her from the attack, the Mohegan ran toward “Mrs. Brewster, and held fast about hir, the other Indians pulled him by force from hir and presently killed him and cutt of his hand and fledd away.”6 Apparently, the Narragansetts were upset that Brewster had been supplying his Mohegan allies with firearms, and the attack, which resulted in the death of the Mohegan servant, was in retaliation. Though no member of Brewster’s family was physically harmed, the incident was a tremendous fright to all of the English settlers in the region.

When Brewster’s death came, it was the result of an illness rather than an act of violence. He passed away in August of 1659, at 66 years of age. He was buried in Brewster’s Neck Cemetery, which is all that remains of the family’s home and trading post there. Both Windsor and New London owe a debt to Brewster for his role in the settlement of our towns.