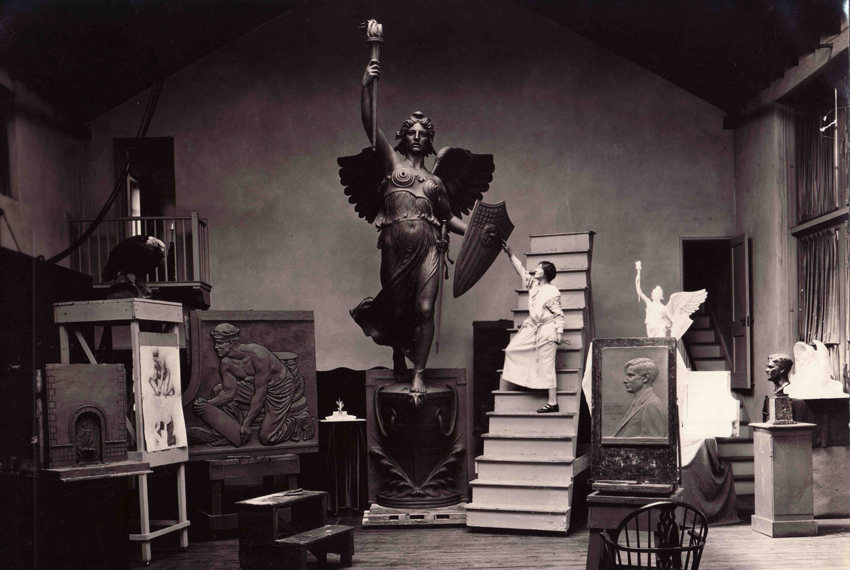 Join us at Windsor Historical Society on Saturday, March 16th, 2019 at 2 p.m. to learn about the life and work of Evelyn Beatrice Longman, the first woman to gain full membership in the National Academy of Design. A woman with a tragic and difficult childhood, she managed to save enough money to get accepted into college and eventually the Art Institute in Chicago. After graduating with honors in two years from the four-year program, she soon moved to New York City where she opened her own studio and her career took off. She won national competitions and was selected unanimously to craft the chapel doors at the United States Naval Academy in Annapolis. She also collaborated and worked closely with Daniel Chester French on the Lincoln Memorial.

In 1918 she met and soon fell in love with Nathaniel Horton Batchelder, the headmaster at what is now the Loomis Chaffee School; his first wife had died and he engaged Evelyn to sculpt a bas-relief in her memory. Evelyn and Nathaniel were married in 1920 and Evelyn moved her studio to Windsor, calling it Chiselhurst-on-Farmington. From Windsor, Evelyn Longman Batchelder continued to sculpt, completing many large pieces now seen across the United States. At the same time, she managed to balance her duties as the wife of the Headmaster of the Loomis Institute where she was highly regarded by the boys.  Loomis Chaffee School has many of her works and Windsor has her iconic Eagle War Memorial on Broad Street Green as well as the Founders of Windsor Monument on the Palisado Green.

In preparing for this talk, Liz Burke has reviewed Longman and Batchelder correspondence, spoken with Batchelder grandchildren, and viewed many of her works. Her presentation will highlight the talent, character, and strength of this remarkable Windsor woman. Family members are planning to bring several of their Evelyn Longman Batchelder pieces for display at the program.