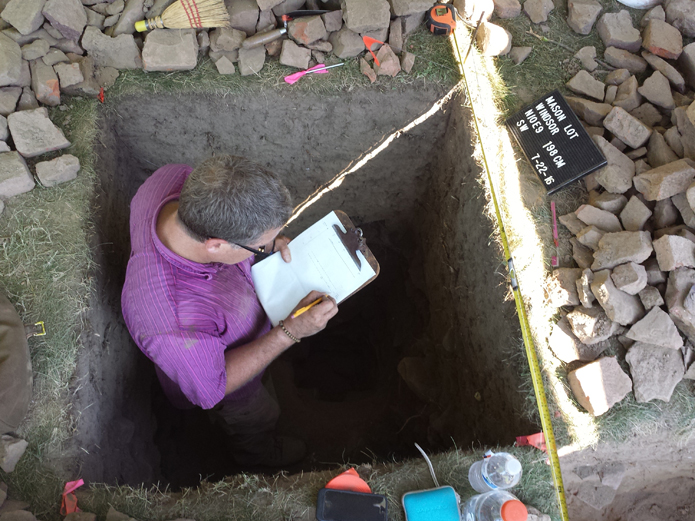 Last summer was full of excitement in Windsor as the Friends of the Office of State Archaeology working with Connecticut State Archaeologist Brian Jones utilized ground-penetrating radar to investigate the boundaries of the Palisade which surrounded the Palisado Green during the Pequot Wars. A filled-in and forgotten cellar on what had been Captain John Mason’s home-site was excavated, yielding straight pins, ceramics, clay pipe fragments architectural remnants such as lead window came, glass shards, and plaster, coinage, and food remnants such as salt water shellfish, and animal bones.

Jones will speak at Windsor Historical Society on Tuesday, May 2, 2017 at 7 p.m., showing what artifacts from the Mason site and another early site at the Hollister Farm in Glastonbury reveal about 17th century colonial dress, diet, tablewares, architecture, and farming, and community.

Brian Jones became Connecticut’s most recent State Archaeologist in July of 2014. He has worked as an archaeologist since 1992 for AHS/PAST Inc., the Mashantucket Pequot Museum and Research Center, and Archaeological Services at UMass Amherst. He received his Ph.D. in Anthropology at UConn in 1998. Jones has a broad background in New England archaeology that spans the Paleoindian period through the industrial era. His special fields of interest include the peopling of the New World, lithic analysis and geo-archaeology.

Ceramic fragment found during the dig at the Mason lot in July, 2016.