Daughters of the American Revolution in Windsor

Members of Windsor’s Abigail Wolcott Ellsworth DAR chapter pose on the front porch of the Oliver Ellsworth Homestead on the occasion of opening it as their new chapter headquarters, October 8, 1903. WHS collections 2008.2.2, photo by Katherine Barker Drake (standing far right).

2019 marks the 125th anniversary of Windsor, CT’s Abigail Wolcott Ellsworth Chapter of the DAR. For the occasion, we are republishing this article by Ella M. Kinney, which originally appeared in The Windsor Town Crier newspaper in December, 1916, and was titled “A Sketch of the National and Local Organizations of the Daughters of the American Revolution”. We have edited it for length.

A Sketch of the National Organization of the DAR

In July, 1890, Mrs. Mary S. Lockwood asked pertinently through the public press: “Were there no foremothers in the American Revolution?”

The question acted upon the women of the country as a sort of call to arms, and on the 9th of August of the same year, Miss Eugenia Washington, Miss Mary Desha, and Mrs. Ellen Hardin Wolworth met with Mrs. Lockwood and it was decided that there should be a national society to be called the Daughters of the American Revolution. On October 11th, 18 women signed the Covenant which brought the society into existence. Active work was immediately commenced.

Mrs. Caroline Scott Harrison, wife of the President of the United States [Benjamin Harrison], was chosen as Regent and soon afterward plans for handling the many and rapidly growing interests of the organization were presented. The President General expressed her opinion that a home center should be arranged for as soon as possible. In February, 1892, Mrs. W. D. Cobell eloquently expressed the idea of this home center as follows:

“The outward and visible sign of what we believe to be an inward and spiritual grace, is the building of a House—a House Beautiful—to be the property in fee simple of these American women calling themselves by inherited rights, Daughters of the American Revolution. It should be the finest building ever owned by women and it should be purely American.”

The answer to this appeal is now to be seen in the beautiful headquarters of the National Society of the DAR in Washington. The Abigail Wolcott Ellsworth Chapter of Windsor gave its mite toward the Building and Furnishing Fund of the now completed Continental Hall.

It is said to be the costliest and most impressive monument of its kind ever built by women in this country or any other. 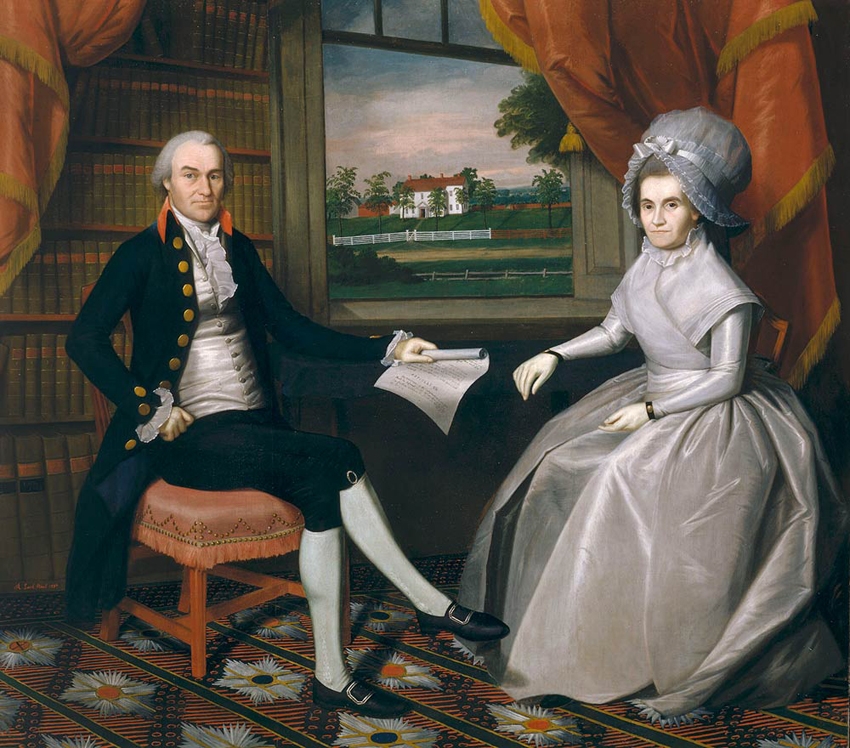 Painting of Oliver and Abigail Ellsworth, by Ralph Earl, 1792. The Ellsworth homestead, before the family added the front porch and columns, can be seen in the background through the window. Original at the Wadsworth Atheneum.

The story of our local chapter, which was named after the wife of Chief Justice Oliver Ellsworth, is of course of more definite interest to Windsor people and with the above data as a sort of introduction it follows:

In November, 1894, Mrs. Lucien B. Loomis of Windsor called upon Mrs. Sarah N. Hayden Power and her daughter, Miss Mary E. H. Power. She was accompanied by Mrs. Keirn, State Regent of the Connecticut DAR. Mrs. Keirn asked Miss Power (who was a Daughter of the Revolution and a member of the Ruth Wyllys Chapter of Hartford) if she thought a Chapter could be formed in Windsor, the oldest town in the State. She also asked Miss Power to secure the names of twelve ladies who would like to organize such a local Chapter. Several gatherings of women interested were held at Miss Power’s home before the required number was secured.

On December 8th a meeting was held at the home of Mrs. Mary E. Bell. Officers were elected as follows: 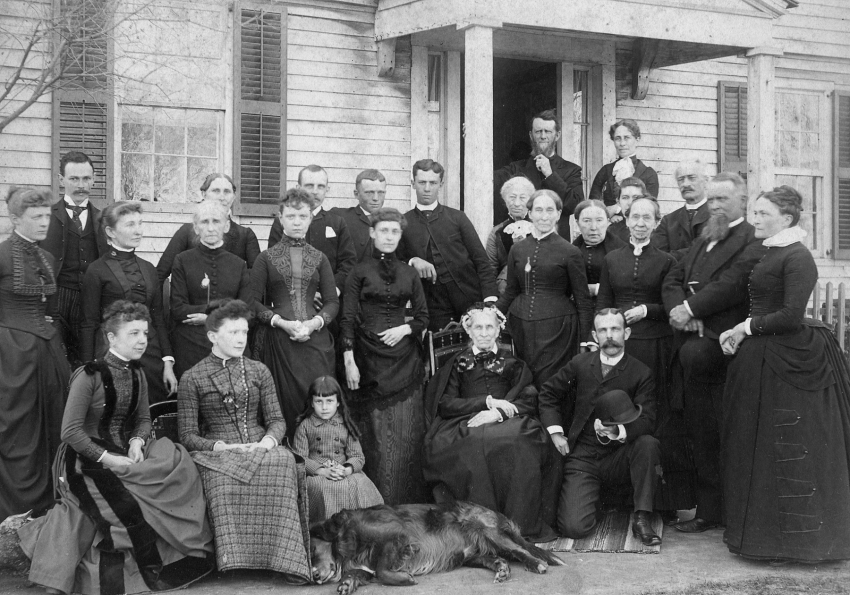 Anna Maria Benton’s 100th birthday gathering on April 16, 1897. She spent the occasion seated in her rocking chair using her ear trumpet to hear songs performed for her. WHS collections 2007.1.18.

Anna Maria Benton was the one real daughter of the Revolution [her father served in the Revolutionary War], and was in her 97th year. During the year 1895-6 five new members were added. One of these was Mrs. Ellen Ellsworth Curtis, a great-granddaughter of Chief Justice Oliver and Abigail Wolcott Ellsworth.

At this time the local Chapter was, with the exception of two recent organizations in towns of much less historic significance, the smallest in the state.

On April 15, 1897, Anna Maria Benton celebrated her 100th birthday. The day was a memorable one. Her home with her grand-niece, Mrs. Walter W. Loomis, the Vice-Regent of Abigail Wolcott Ellsworth Chapter, was beautifully decorated by kind friends and neighbors. She received guests to the number of 75, including the members of the local Chapter, in her usual quiet and happy manner.

Miss Benton lived to see one more birthday and on the 13th of May, 1898, she passed peacefully away. A few days later she was laid to rest in Palisado Cemetery, the members of the local Chapter attending the funeral in a body.

In June 1898 the Chapter unveiled a boulder on “The Island,” [elevated land where the Loomis Chaffee School campus is now] before a large number of invited guests. Exercises were held at the Town Hall before the unveiling and afterwards luncheon was served at Grace Church Parish House. The inscription on the boulder reads:

“This rock marks the first English settlement in Connecticut by members from Plymouth Colony 1633. Dedicated by the Abigail Wolcott Ellsworth Chapter Daughters of the American Revolution, June 1898.”

The First English Settlement Rock as it looked in the early 20th-century, located near the site of where the Plymouth Colony erected their trading post in 1633. WHS collections 1998.60.1, 2014.1.18.

Shortly after [the 1903] meeting the heirs of Chief Justice Oliver Ellsworth announced their intention to give the Ellsworth Homestead to the Connecticut State Chapter of the DAR and arrangements were made for exercise appropriate for the occasion. One day in August some of the ladies of the Suffield Chapter and several members of the local Chapter went to the Ellsworth House to cut, sew, and make the curtains. Later in September, the same ladies went and helped to put the rooms in order for the memorable day, October 8th, 1903.

The dedication was a great occasion for Windsor. Flags were flying everywhere and by all roads people were coming to the opening of the Homestead.

His Excellency, Governor Abiram Chamberlain, escorted by the First Company, Governor’s Foot Guard, attended and gave a greeting. Mrs. Sara T. Kinney, State Regent, presided over the meeting. The presentation of the deed to the Homestead was made by Mrs. Frank C. Porter, a great grand-daughter of Oliver Ellsworth. Acceptance on behalf of the Connecticut DAR was gracefully expressed by the State Regent. A reception and an inspection of the Homestead followed, during which a band concert was given on the beautiful lawn. 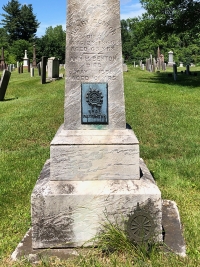 On September 30, 1904, occurred the patriotic pilgrimage of the Connecticut Daughters of the American Revolution with the Abigail Wolcott Ellsworth Chapter. The exercises were held in the Congregational Church, greetings being extended by Miss Jennie Loomis.

The President General of the National Society, Mrs. Charles W. Fairbanks, and other guests, were in attendance, and the graves of Chief Justice Oliver Ellsworth and Abigail Wolcott Ellsworth; Roger Wolcott, Governor of Connecticut in 1750, and Sarah Drake Wolcott, his wife, were decorated. Then the pilgrims proceeded to the Ellsworth Home where they planted a seedling of the Charter Oak tree upon the lawn.

In the year 1914 this Chapter placed a tablet in the Roger Ludlow School to his memory and also held exercises appropriate to the occasion. The Chapter has also given its mite at various times toward helping children to get an education.