Scrapbooks, scrapbooks – what to do with them! Not only is scrapbooking a popular hobby, but many of us have inherited scrapbooks or created them ourselves from treasured bits and pieces that remind us of special events or people in our lives. For a historical society, scrapbooks are a particularly difficult format to preserve. Generally, they are comprised of a mixture of types of cherished mementos—photos, pressed flowers, ticket stubs, newspaper clippings—which each have different long-term preservation needs. One of the special albums at the Windsor Historical Society is a collection of 18th– and 19th-century documents compiled by Daniel Howard at the time of Windsor’s 300th anniversary celebration in 1933. Local educator and historian Daniel Howard (1864-1967) was asked to write a history of the town as part of the festivities. The scrapbook contains bills and receipts, inventories of taxable property, complaints and warrants, early Acts and Laws of the General Assembly, and a few pieces of correspondence. Some of these documents were the basis for stories in Mr. Howard’s book Glimpses of Ancient Windsor, From 1633 to 1933.

In an effort to ensure the preservation of these documents, the Society had conservation work done on the scrapbook at the Northeast Document Conservation Center (NEDCC) in Andover, MA. This facility is well respected for its expertise in repairing and restoring paper-based objects such as maps, prints, photographs, and wallpaper. Out scrapbook was first taken to their laboratory in July of 2005 for evaluation and preparation of a treatment plan. The scrapbook was comprised of nearly 100 items glued to brittle and crumbling album pages that had broken away from the covers. WHS wanted each document removed from this acidic paper so it could be housed more appropriately and to ensure its long-term preservation. Before conservation – a sample page layout from the scrapbook.

NEDCC carefully tested the ink and glue on each and every printed and handwritten document. With a tiny brush the conservator put one drop of water on the ink, waited a minute, and then gently touched the spot with blotter paper to see it there was any transfer of color. Early printers’ inks were usually made from lampblack and linseed oil and are generally stable; the iron gall inks used for handwriting would have been made from hundreds of personal recipes and their stability is unpredictable. Luckily the inks on our documents passed the sensitivity tests and the conservators were able to proceed.

Paper from this time period was made in individual sheets. A mixture of pulverized fabric scraps and water was scooped onto a wire screen, the water drained away, and the matted fiber sheet hung to dry. Compared to modern papers, these rag papers retain their structural integrity and do not disintegrate if they get wet. The experienced paper conservators at NEDCC immersed each scrapbook page in a bath of filtered water. This allowed the glue to dissolve and the document to separate from the album page. As predicted, the stable inks were unaffected. Washing also removes dirt and stains and reduces the acidity of the paper. The water was changed as many as three to five times before the wet documents were removed, laid on blotting paper on a screen and air dried for several days.

The next step was to flatten each item. The paper was dampened with a fine mist of water, sandwiched between blotter paper and a polyester fabric called Remay, and placed into a press for another week. Paper has a memory and tends to return to a curled or distorted stated unless it is pressed thoroughly. Finally, each document was evaluated for mending and lining. A very sheer Japanese tissue paper called tengujo is used to repair tears and to support fragile papers. Tengujo is made from kozo, a material that has long flexible fibers obtained from the inner bark of the paper mulberry plant. It is translucent, does not discolor or become brittle, and is thin enough that it does not obscure writing. Many of our documents were lined with tengujo and you can read them clearly. Left, page before conservation. Howard transcribed the text on the side he concealed when he glued the document to the page. Right, front and back of the original document after conservation. The verso side appears lighter because the tengujo is pasted on that side. Before conservation, the verso side was not visible at all as it was glued to the scrapbook page. This document is a receipt of 30 pounds payable to Rev. David Rowland for his “Negro man Edward” for enlisting in the Continental Army. He promises to return if his man does not pass muster. The verso is a copy of a receipt showing that Edward did muster, signed by Capt. Abner Prior.

Before the conservation work we took digital photos of each page of the scrapbook in order to document it thoroughly as an object. A future project will be to digitally scan each individual document and add these to our catalog database. The documents are now housed in archival folders and an index list briefly describes each one. It is interesting to examine the various letters, receipts and lists. On some items writing that has long been hidden on the glued-down side is now exposed. We see evidence of the frugal reuses of paper and, in one case, we find that the “rest of the story” is revealed. Early in 1765, Elihu Moore complained to Windsor’s Justice of the Peace Henry Allyn that “Some Evil Minded Person unknown Not Having the fear of God Before His Eye nor Regarding the Laws of this Colony” did “in a felonious Manner Steal or Take from Him the Complanor four Hens that were own Proper Estate.” He asks Allyn to execute a search warrant and “the Person in whose Custaday Said fouls is found be arrested.” The same day Henry Allyn issued an order to the Sheriff and his Constable to “fourth with Make Dilegent Serch after the Above Described Hens in All Suspected Places” and “the person in whose Custady you find Said Hens you Are to Arrest.”

Removing the paper from the scrapbook page has allowed us to see that Constable Phineas Willson acted promptly on the writ. In Windsor on January the 18th Day of 1765 he “made Serch at the Dwelling House of Peter Dusset & found Some Bones & Part of a fresh fowl and which I Have Brought…in my Custaday and Also Have Arrested the Body of Peter Duset Ammon Duset and Attai Labbe.” The back side of the paper also shows the breakdown of the constable’s fees and court costs charged to the suspects. Detail of the reverse side of the above document.

We have scoured the Society acquisition and institutional records to learn more about the scrapbook’s history. Hard evidence is sparse, but the Report of the President in the Society’s Annual Report of 1947 mentions “a book of very old documents, made by Mr. Daniel Howard, now in Town Hall [that] should be acquired.” Howard himself writes in the forward to both of his histories of Windsor that his work was based almost entirely on original records and documents. He wanted to let the documents tell their own story with minimal explanations and comments. And the source of the documents? We really don’t know, but Howard’s autobiography tells us that “thousands of old documents had to be brought out from old vaults and from many old attics and family archives. A group of interested men literally pored over bushels of papers that had long collected dust without disturbance in an old vault in the basement of the Town Hall.”

The Society takes seriously its mission to care for the objects entrusted to us. The project is an example of how our modest conservation budget funds can be applied. The Daniel Howard scrapbook was chosen for conservation because it documents were at risk on their deteriorating pages. For about $20 per document, we were able to ensure a longer life for these glimpses of history. By sharing the story of Daniel Howard’s scrapbook, we hope to heighten awareness that what we consider incidental or routine in our present lives might be of interest to future generations. Insights about the past may be gleaned from a wide variety of sources. And this, of course, is the appeal of value of archives and historical societies.

More documents rescued from the scrapbook: 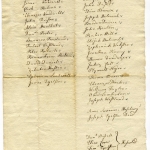 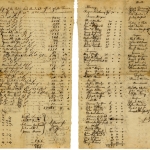 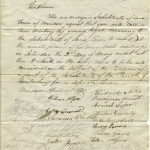