Windsor’s Palisado Cemetery is a beautiful place to walk and explore town history. It is the home to (purportedly) Connecticut’s oldest surviving gravestone commemorating the life of Reverend Ephraim Huit who died in 1644. The clearly engraved epitaph on Huit’s stone reads:

What are the stories of the men behind this epitaph: the man memorialized by it and the man who carved it?

In August of 1639, Ephraim Huit, who had been pastor of Wroxall in Warwickshire, England, arrived in Windsor to join the Rev. John Warham. He was accompanied by a number of Warwickshire families – the Griswolds, Loomises, Porters, and Clarkes, among others.  Reverends Warham and Huit would serve the congregation of the Church of Windsor in different ways. Warham was the pastor, the spiritual leader, the caretaker of souls. To Huit fell the role of teacher, who set forth the meaning of church doctrine and the scriptures through the medium of sermons.  Reverend Huit preached his first sermon to the Windsor congregation on August 18, 1639 using as his text I Corinthians 12:31, “And yet show I unto you a more excellent way.”

Warwickshire settlers accompanying the new minister to Windsor would complain of steep local land prices in 1639 as they tried to purchase land from Dorchester party members who had arrived four years previously. Ephraim Huit was in a different category, lured to Windsor with the promise of several generous grants of land plus the proceeds of the toll from the town’s corn mill.

Shortly after his arrival, Huit began supervising the building of a meeting house with a steeply pitched roof, four rows of pews and four separate box pews for the families of church elders, deacons and magistrates, accommodating roughly 200 congregants. He supervised the construction of a bridge to connect the settlements on the north and south sides of the Farmington River. No matter that ice on the Farmington and Connecticut Rivers was treacherous or that flood waters roared swiftly: attendance at church services was mandatory.

One story passed down about Huit indicates that he took to this work with such zeal that he ignored two eminent religious colleagues from Hartford, the Reverends Thomas Hooker and John Stone who had come to call one day. Hooker and Stone eventually gave up on the visit, saying to one another, “Ephraim is joined to his idols; let him alone.”

Ministers were people of great stature in Connecticut’s early communities. Huit’s home reflected that stature with a valuable library of books, carved furniture, carpets, cushions, pewter salts and bowls. Huit’s children ate from silver spoons with their initials engraved upon the handles.  Sadly, Huit’s tenure in Windsor was not to be long. In 1644, little more than five years from the time of his arrival in Windsor, Ephraim Huit was dead. 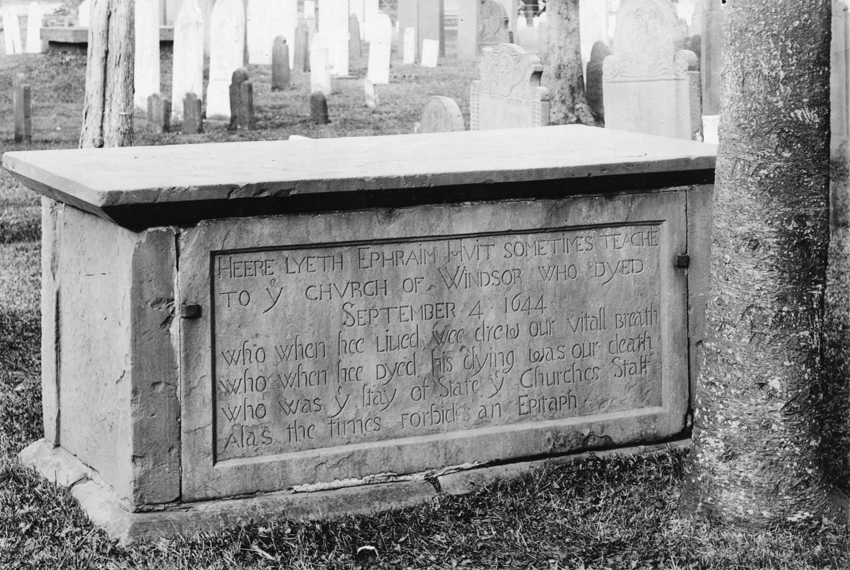 The grave of Ephraim Huit as it looked in the early 20th century, with nearby trees. 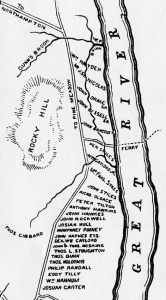 One of the Warwickshire families accompanying Ephraim Huit to Windsor in 1639 included Matthew Griswold (1620-1698) and his nephew George Griswold (1633-1704). Both would become skilled masons and gravestone carvers. Scholars differ as to whether the Huit gravestone was the work of Matthew or George. It seems most likely to be the work of Matthew, since George was eleven years of age in 1644. The brownstone grave marker is smooth and even textured, quarried from “Rocky Hill” about two miles north of the cemetery in the vicinity of today’s Settlement Hill development.

Matthew Griswold and his brother Edward were two of the Warwickshire settlers who testified that “…land at Windsor, nere the towne and redy for improvement, was at a high price” in 1639. Matthew Griswold married Anna Wolcott in 1646 and hoped to buy land in Windsor where his wife’s family was well established. His father-in-law advised him that the land prices in Windsor were too high; shortly afterward, Matthew and his wife moved to Saybrook, taking up land on the east side of the Connecticut River. 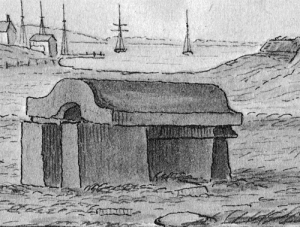 A surviving receipt dated 1 April, 1679, registered at Saybrook lists seven pounds sterling “paid M. Griswold in Pay’t for the tombstone of Lady Alice Boteler, late of Saybrook”. Alice Boteler or Butler was also known as “Lady Fenwick”, wife of the original proprietor of Saybrook. Her tombstone was important enough to be sketched by Windsor’s John Warner Barber in his Connecticut Historical Collections of 1836, although the tablet with the inscription was long gone when Barber sketched it. Matthew Griswold maintained ties with Windsor. When his wife’s parents, Henry and Elizabeth Wolcott died in 1655, he furnished the gravestone that still stands in Palisado Cemetery. Elizabeth Wolcott epitaph on the opposite side to Henry’s, as it looks today.

Meanwhile, Matthew’s nephew George had grown up, settled in the relative wilds of Poquonock where land was affordable, and established his own successful stone-cutting practice. Palisado Cemetery includes several interesting stones carved by George Griswold. His enigmatic inscription for the stone for “B.W.” of Windsor who died in 1680 reads: BW
Died Sept:2:1680
What once was writ by one upon this stone
He hears is now washt out and lost and gone
Twas writ hoping in time he might it find
Not on this stone but on the reders minde.

George Griswold outlived his uncle Matthew by six years, dying in 1704. His estate inventory reveals that he owned “Tools for ingraveing,” augers, gouges, wedges, and narrow axes as well as an interest in “the quariefield.”

Graveyards are unique and special places transmitting art and history across the generations. The history of a community can be seen in epitaphs that tell you about peoples’ achievements, about their hopes and beliefs, and about how they died. The gravestone cutter’s art can be seen in striking carvings of death’s heads, angels, weeping willows, and hands pointing heavenwards. Connecticut’s cemeteries are there to be experienced and enjoyed, but also respected and protected for future generations as a treasured resource.

Much of this material came from Frank Thistlethwaite’s Dorset Pilgrims, Esther Griswold French and Robert L. French’s The Griswold Family: The First Five Generations in America, Dr. Caulfield’s article “Connecticut Gravestones I: George Griswold (1633-1704)” in Markers VII and The History of Ancient Windsor, Vol. I, by Henry Stiles.