For the colonists of the 1600s and 1700s much of daily life was filled by tiring drudgery, but throughout the long hours of the work day, beer, cider, rum, and other intoxicating beverages provided a dependable source of comfort. Each day was supplemented by a generous allotment of alcoholic beverages imbibed from their waking hours all the way through the late evening. As author Corin Hirsch states in Forgotten Drinks of Colonial New England, “From breakfast cider to afternoon beer to evening flips, toddies and glasses of Canary wine, alcohol lubricated almost every hour of every day.” Drinking accompanied a diverse range of occasions that often took place in taverns, or during meals, work breaks, business meetings, weddings, funerals, trials, and legislative sessions. Daily, day-long “tippling” was simply a fact of life in the colonial period.

While this behavior may be frowned upon in the modern era, colonials viewed the constant intake of liquor as a necessary and beneficial practice. Despite a lack of scientific understanding, the early settlers of North America knew that drinking from certain water sources could make a person deathly ill. Without proper sanitation practices or a way of discerning contaminated water from clean, they largely avoided it, instead seeking hydration from beverages unintentionally sanitized through the processes of fermentation and distillation. Alcohol was not only potable, but also was seen as a healthy, invigorating substance, which was even used in the treatment of disease. While the relatively staid puritan communities of New England such as Windsor admonished drunkenness, they hailed alcohol as the “good creature of God”. 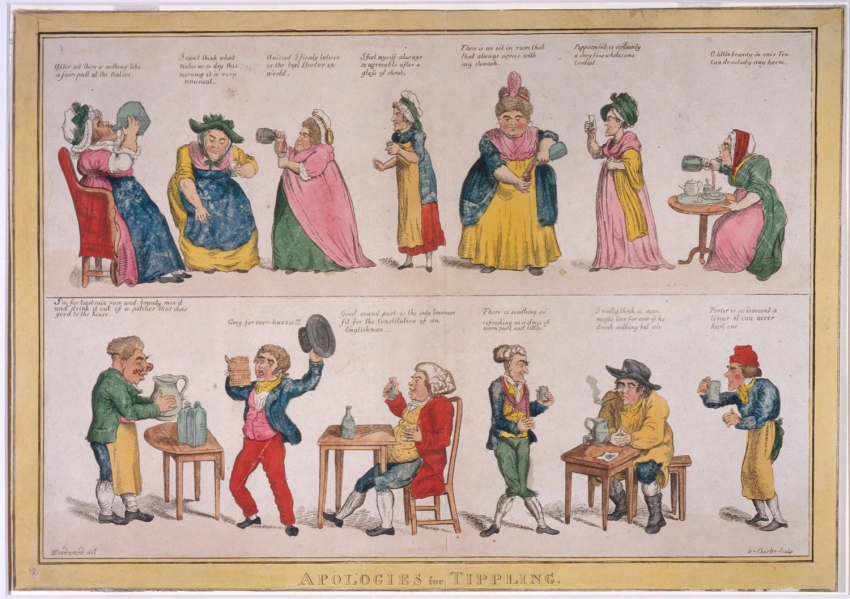 Apologies for Tippling by William Charles and George Moutard Woodward, circa 1800. This political cartoon shows some of the many reasons people found for “tippling” or drinking excessively. Courtesy of the Library Company of Philadelphia.

However, just because alcohol was an element of daily life didn’t mean that inebriation was acceptable. Since its inception as a colony, Connecticut listed drunkenness as a punishable offense. The colony’s 1650 code of laws ordered that “auery person found drunken… shall forfeit ten shilling” and if unable to pay the fine they “shall bee put into the stocks for three houres when the weather may not hazard his life or limbs.” In 1658 the General Court in Hartford expanded the fine for being drunk, even in a
private residence, to “twenty shillings for each transgression.”

Over the course of the 17th and 18th century stronger distilled liquors, such as rum and whisky, grew in popularity, but the drinking habits of the public remained unrestrained. As alcoholism grew rampant in communities across the country, advocates of moderation began to arise, mostly amongst clergy and women. By the early 19th century, these social reformers began to shift public views on the acceptability of alcohol, catalyzing the rise of the popular temperance and prohibition movements that resulted in the national prohibition of alcohol from 1920-1933.