Handwritten entries in the Gillett-Holcomb Bible.

This article originally appeared in the Windsor Historical Society Newsletter Vol. 8, No. 5, in September, 1990. The first part was written by then Society director Robert T. Silliman, and the second part by Raymond A. Beardslee, a former owner of the Bible.

Henry Reed Stiles, in his History and Genealogies of Ancient Windsor, Vol. II (1892), begins the Jonathan Gillett genealogy as follows:

Gillet, Jonathan, with his brother Nathan came to Dorchester, Mass., with Rev. Warham, and to Windsor with the first emigration. Both he and his wife were members of the original Dorchester and Windsor church.[…]

There is still extant, in the possession of a Windsor family, a copy of the Geneva edition of the Bible, of 1599. This Bible was brought to New England by this Jonathan Gillett, senior, and afterwards passed into the hands of the present Holcomb family, probably through Lois, who was the daughter of Jonathan Holcomb by his second wife, Widow Mary Gillett[…] Lois Holcomb, born 5 July, 1748, was married July, 1772 to Noah Cooley of North Granby, Conn.

In the family this Gillett-Holcomb Bible was familiarly known as the “Bear Bible”, because it was once, in the olden days, placed in a window to keep the sash raised, when a bear, endeavoring to effect an entrance, clawed it, leaving the marks of his claws so deep upon the edges of its leaves, that they are still very plainly to be seen.”

During Windsor’s 350th Anniversary Celebration in 1983, a “Founders’ Day” was scheduled to bring together descendants of Windsor’s founders. Rev. Lyman Gillette Potter, who was then minister of the First Church of Christ, Simsbury, CT, came to the Windsor celebration as a direct descendant of Jonathan Gillett, who had come to America on the ship Mary and John in 1630. This group first settled in Dorchester, MA, and five years later, in 1635, migrated to Windsor. During Rev. Potter’s visit to Windsor’s Founders’ Day in 1983, he brought with him and placed on exhibit the Gillett-Holcomb Bible, aka the “Bear Bible”. 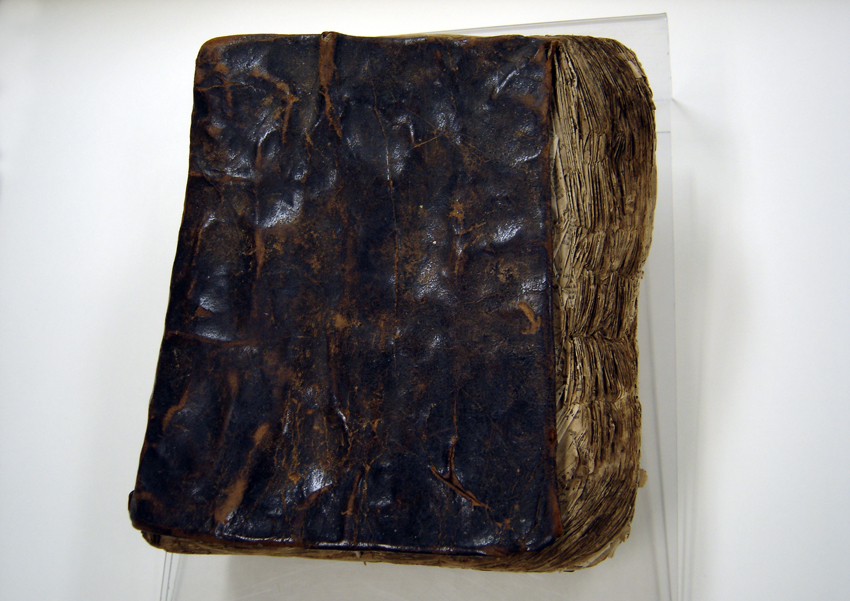 I was impressed with the survival of this valuable 17th-century Bible and since then have wondered what would be its ultimate fate. When planning to create a Windsor History Exhibit for our then new Mills Building, I wondered about the possibility of placing the Gillett-Holcomb Bible on permanent exhibit as an object probably carried from England aboard the Mary and John.

In June 22nd, I wrote Mr. Potter, who lived in Saratoga Springs, NY, after retiring from the Simsbury parish, explaining my thoughts on placing the “Bear Bible” on permanent display. On August 1st [1990] I had a phone call from Rev. Potter stating that he was in Simsbury and would come for a visit the following day to donate the Bible to the Windsor Historical Society as a memorial to all of the descendants of Jonathan Gillett. 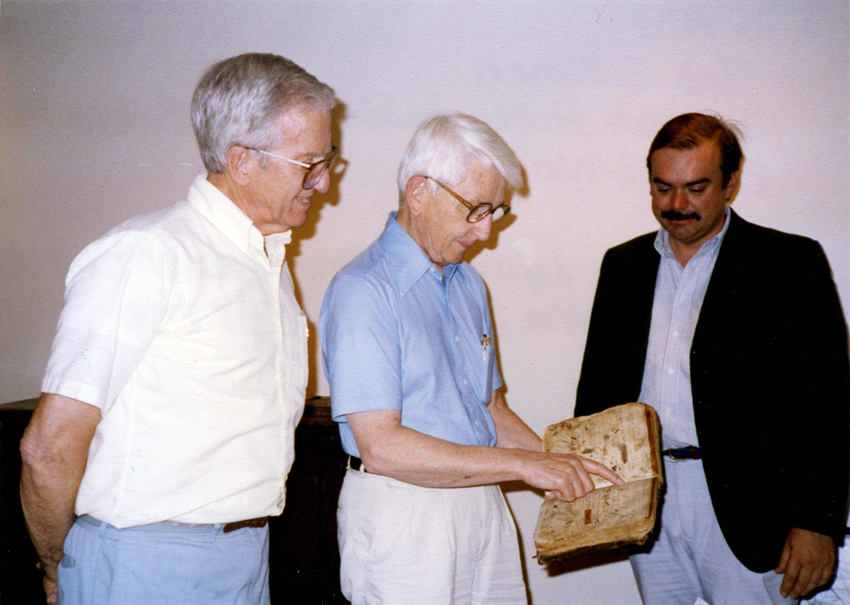 The descendants of Jonathan Gillett, members and friends of the Society, and the citizens of Windsor are most grateful to Rev. Lyman Gillette Potter for this generous gift. Accompanying the Bible was a history that has been assembled over the years by generations of Gilletts.

Visitors to our Society will hereafter be able to view this precious personal Bible of one of the early founders of Windsor, Connecticut, and the United States of America.

Provenance of the Gillett-Holcomb Family Bible

This volume is of the size called “quarto”, about 8 inches tall, 7.5 inches wide, and 2.5 inches thick. It is printed in Roman type, not in block letter.

Both title pages are missing, but internal evidence identified it as having been printed in Amsterdam, Holland, in 1599. This edition is one of the many editions (140 or more) of the very popular Genevan translation of the Bible, with marginal notes, the first of which was printed in Geneva in 1599. Commonly called the Geneva Version, it was the favorite edition of the English Bible among the Puritans in England. It is also notable because it had a profound effect upon the English of the King James translation of 1611 (the Authorized Version). The Geneva Version is also known as the “Breeches Bible” because of its translation of Genesis 4:7, “And they sewed fig-leaves together, and made themselves breeches” (“aprons” in the King James Version).

This copy is sadly torn and damaged. Many pages of the text are missing. The cover is a rough, homemade leather binding. There are deep scratches in the front edges of the leaves, which, according to family tradition, were made by a bear’s claws as the Bible lay on a window sill holding up a window sash.

In spite of all the damage, the precious blank pages between the Old and New Testaments are still intact. Their meager pen and ink entries establish the copy as having belonged to the early Gillett family.

The script of the Gillett entries are in the hand of Jonathan Gillett, of the second generation. His identity is proved by the references to himself in the following items:

“my fathar Gille(t) came Into new:inglon the secon time In June in the yeare 1634 and Jonathan his sonn was born about half a yeare aftar he came to land.” 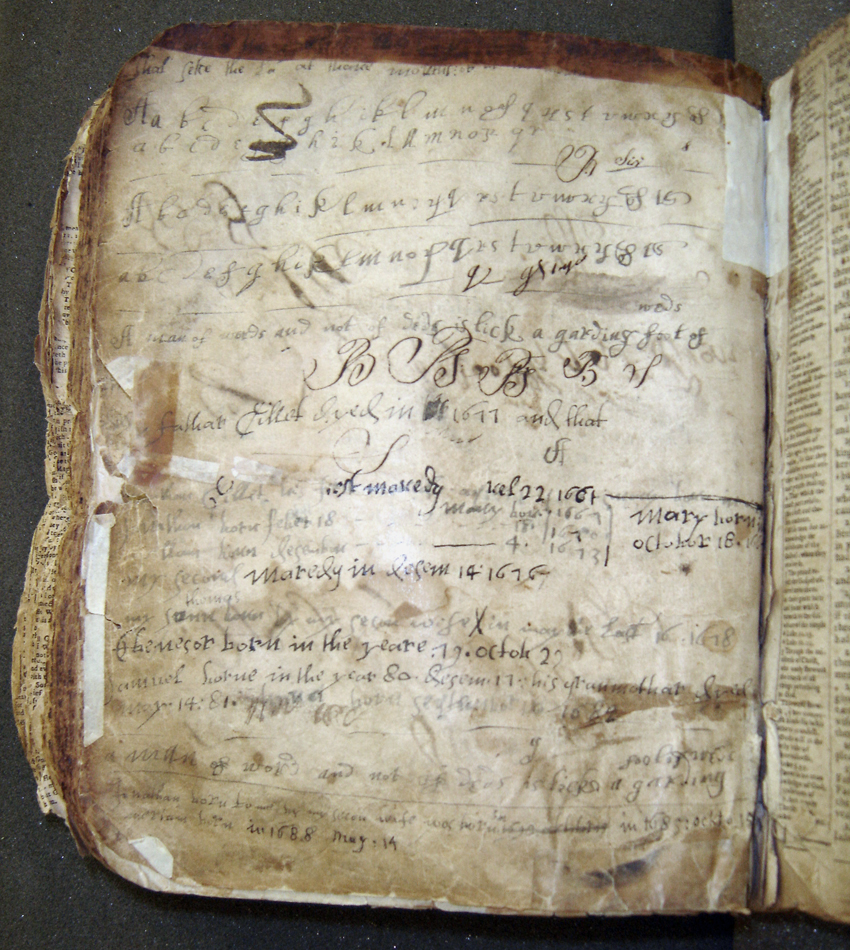 It seems probable that this Bible was brought to New England either by Jonathan Gillett in 1630, or Jonathan and his wife [Mary Dolbiar] in 1634. It apparently became the property of Jonathan Gillett of the second generation, who entered therein the records of his own birth, his two marriages, and his children.

I have understood that from him it passed to one of his descendants. This owner married and then died, and his widow married a Windsor Holcomb. Then the volume came down in the Holcomb family in Windsor for many years, to at least 1737. This appears from two entries in a much later hand and ink [see top image]:

Then as I have understood, a Lois or a Eunice Holcomb married a Cooley and went to live in Granby, CT, and either then or later the “Bear Bible” passed into the Cooley family of Granby. At the death of the last of that family, a foster son in Granby named Charles Coffey returned from western New York and settled the estate, keeping the Bible as a curio, though he was not a Gillett descendant. It was from him that I bought it about 1915, having traced out its whereabouts by some correspondence and a trip to Granby on the day before Thanksgiving in 1913.

My own Gillett descent is through my mother, Emma Gillette Alvord, of Bolton, CT. Her mother was Mary Williams Gillett, of Colchester, CT, wife of Henry Alvord of Bolton. Her father was Ely Hall Gillett, son of Ely Gillett, and so on through General Jonathan Gillett and Josiah Gillett to Jonathan Gillett the emigrant.

On June 15, 1947, in the Congregational Church at Norfolk, CT, I preached the Ordination Sermon for Lyman Gillette Potter (son of my sister, Helen Beardslee Potter and her husband, Rev. James H. Potter, pastor of that church), and then and there, for his middle name, presented him with the “Bear Bible” once owned by his Gillett ancestors; charging him to prize it as a symbol of the continuity of the Christian Faith through the generations.

By Raymond A. Beardslee