On May 14, 1916, the dedication ceremonies for the new St. Gabriel’s Church took place on a lovely spring day. A standing-room-only crowd of over 1,000 attended the first services as bright sunlight filtered through the stained glass windows and illuminated the beautiful new altar. This was a positive day of celebration for the entire town, a town still reeling from the arrest of St. Gabriel’s parishioner Amy Archer-Gilligan six days earlier on the charge of first-degree murder.

Archer-Gilligan, a diminutive widow with a teenaged daughter who, like many fellow parishioners, had contributed to the church building fund, ran a home for elderly people in town and was a regular church-goer. To many, it seemed inconceivable that she could be guilty of the charge of which she was accused. To others, the murder charge was the tip of an iceberg of crimes waiting to be uncovered. 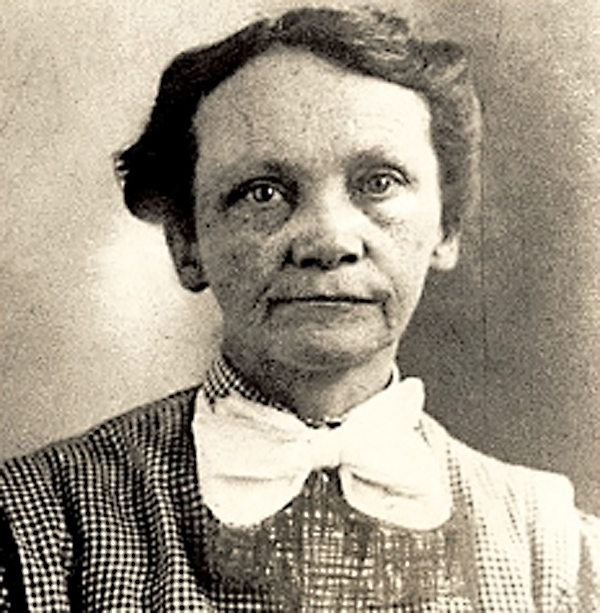 Amy Archer-Gilligan was born in 1868 into modest circumstances to James and Mary Kennedy Duggan in Milton, Connecticut, the eighth of ten children. The family would be visited by mental illness; Amy’s brother John became an inmate at the Connecticut General Hospital for the Insane in 1902, and one of her sisters is listed as residing there in the 1930 census. Amy Duggan married James Archer in 1897. By 1901, the Archers with their small daughter resided in Newington in the house of John Seymour, a frail gentleman whom they cared for in exchange for room and board. When Seymour died, the Archers rented the house from his heirs and turned it into Sister Amy’s Nursing Home for the Elderly. In 1907, the Seymour family sold that home, and the Archers moved to Windsor, using their savings to purchase what became The Archer Home for Elderly People and Chronic Invalids on Prospect Street.

Today, there are over fifty thousand nursing homes and assisted living facilities across the United States, but in the early 20th century, they were not common. Traditionally, care of the elderly had been the responsibility of family members when it was common to have many generations of one family living together. But by the early 20th century, multi-generational extended families were getting rarer as younger generations moved to places of greater economic opportunity. Town poor farms proliferated as communities were forced to assume responsibilities for eldercare. Increasingly, people began to fear becoming elderly, infirm, and a burden on their relatives. So the Archers were actually pioneers in eldercare.

They had no problems filling their home with lodgers, or “inmates” as they were called then. The Archers advertised their services in the local newspapers and had postcards made up. Boarders could pay a weekly fee that ranged from $7 to $25, or they could opt for a $1,000 life care option, and many chose the latter. Eldercare outside the family was too new an enterprise for regulatory agencies to monitor quality of care, but in 1909 the McClintock family of West Hartford sued the Archers about the lack of care given to an elderly family member. That case was settled out of court with the Archers paying the McClintocks $5,000, equivalent to $133,000 in 2018 dollars. Then, in 1910, James Archer died, leaving Amy with their twelve-year-old daughter Mary to support, plus back taxes to pay. Mary, who was a musical child, would soon be enrolled as a day student at Windsor’s Campbell School for Girls. During the 1912-13 calendar year, annual tuition and enrollment fees at the school came to $410, with piano lessons at $50 annually.

Windsor Historical Society’s archival collections include a 1911 letter from Amy Archer to Windsor tax collector Howard L. Goslee in which she disputed back taxes. Archer noted that this was the first time she was hearing of these taxes, and that her husband had died. “I ask to be dealt with honestly – that is all – I fully realize my great loss and sorrow and that I am alone dependent upon myself to care and educate my little daughter who was deprived of her dear father whom she loved so dearly. But I am not afraid to demand justice, and I think it is about time that it is shown me.” 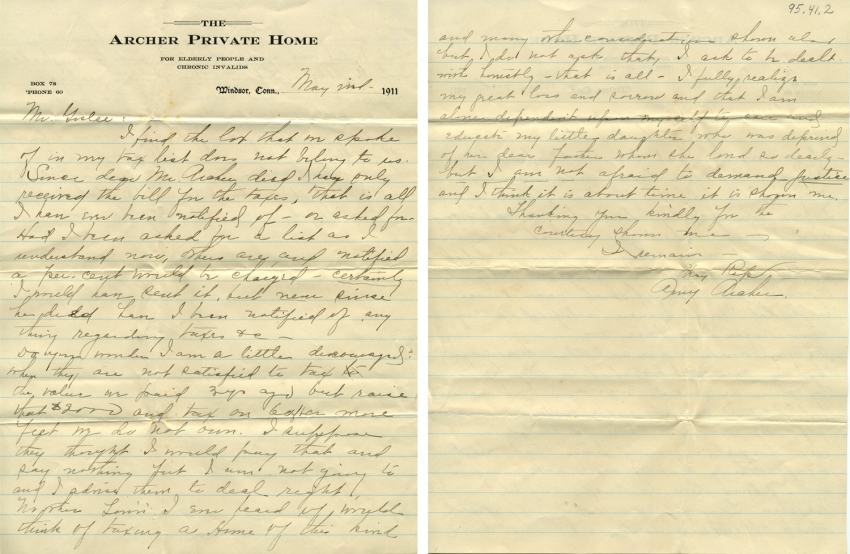 Windsor in the early 20th century was a community poised for modernization and change. Its population more than doubled in fifty years, climbing from 2,783 in 1870, to over 5,600 by 1920. In 1910, the year Amy Archer lost her husband, the town budget for the following year was estimated at $45,285. By 1913, town officials put the town budget for the coming year at $92,465, citing the need for highways and the urgent need to address overburdened public schools. Increased expenses meant increased taxes.

Amy Archer continued to run her lodging house. Late in 1913, she married Michael Gilligan, a vigorous widower with family in town, shaving a few years off her age on the wedding license application. A few short months later, in February of 1914, the 56-year-old Mr. Gilligan was dead, having drawn up a will leaving his new wife his entire estate—in excess of $4,000. This did not go over well with his family. Michael Gilligan’s death certificate listed “valvular heart disease” as the primary cause of death, with a secondary cause: acute bilious attack.

Most of Amy Archer-Gilligan’s lodgers were elderly and somewhat infirm, and many had no close family members living nearby. Franklin Andrews did not quite fit that profile. Sixty years old, he was somewhat crippled, but still healthy enough to do chores, yard work, and errand running for Mrs. Archer-Gilligan. He was close to his family and wrote often about his new life, mentioning the frequency of deaths in the home. In May of 1914, Andrews collapsed after a day spent outside, painting the fence around the property. Two days later, he was dead, cause of death listed as gastric ulcer. While cleaning out his things, his sister Nellie Pierce noticed some correspondence where Archer-Gilligan was pressing Andrews for money. She took her concerns to the state attorney, and to the Hartford Courant.

Hartford Courant correspondent and Windsor resident Carlan Goslee wrote obituaries for Windsor residents. For some years, Goslee had been troubled by the frequency of deaths in the Archer Home. True, many of the “inmates” were elderly, but Goslee was sufficiently disturbed to investigate the poison registers that every drugstore was required by law to keep. He found that Amy Archer-Gilligan had made multiple purchases of arsenic at W. H. H. Mason’s drugstore in Windsor on the Broad Street Green, citing rat problems and bedbugs.

Prompted by all these concerns and complaints, Hartford Courant editor Clifford Sherman opened an investigation. Reporters reviewed years of Windsor death certificates, comparing death certificates of Archer Home residents with those of residents of the Jefferson Street Home for the Elderly in Hartford. They found that between 1907 and 1916, sixty residents of the Archer Home died, twelve of them expiring between 1907 and 1910, forty-eight more perishing between 1911 and 1916, in a period when Amy Archer-Gilligan’s finances were under stress. Looking at the latter five-year period, the number of deaths at the Jefferson Street Home in Hartford was similar, but the population there was seven times that of the Archer Home in Windsor.

There was also a pattern emerging about the causes of death at the Archer Home: stomach pathologies and sudden deaths. It did not take a great leap of the imagination to get to poisoning. Revisiting the poison registers revealed that Archer-Gilligan had purchased ten ounces of arsenic just before Michael Gilligan’s death—enough to kill over a hundred people.

This evidence was enough for a state police investigation. The bodies of several former residents of the Archer home were exhumed and examined. It was later testified that Franklin Andrews’ stomach contained enough arsenic “to kill half a dozen strong men”. Amy Archer-Gilligan was arrested on May 8, 1916, and charged with the murder of Franklin Andrews and other residents of the home.

Archer-Gilligan’s trial began in June of 1917. The case headlined in newspapers all over the country. Four weeks later, Amy Archer-Gilligan was convicted and sentenced to hang. She and her lawyers appealed that conviction, which was overturned. The second trial began in June of 1919. Archer-Gilligan pleaded insanity, was found guilty of second-degree murder, and sentenced to life imprisonment. In 1924, she was transferred to the Connecticut General Hospital for the Insane in Middletown, and there she remained until her death in 1962.

In 1917, the year of Archer-Gilligan’s trial, Connecticut’s state legislature introduced a bill requiring the licensing of “Old Folks Homes” with inspections and annual reports of death submitted to the State Board of Charities, in an effort to prevent anything like this from happening again. Some years later, a New Yorker named Joseph Kesselring, who had read about the case as a boy, decided to write a play. Kesselring came to Connecticut to examine newspaper accounts and old records, then wrote Arsenic and Old Lace, very roughly based on this case. It opened on Broadway in 1941 to a three-year run, followed by a Frank Capra movie starring Cary Grant.

This story has continued to capture the public imagination. The play is a staple of high school drama clubs and community theater groups to this day. Perhaps it is the shock value of a demure churchgoing widow raising a young child committing multiple murders before being discovered. Predators don’t always look like predators. Perhaps it is because a century later, eldercare is still a societal challenge, despite more safeguards now in place.