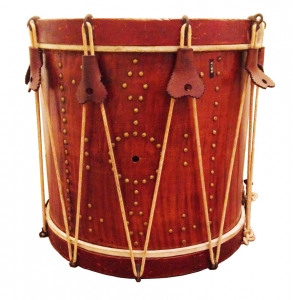 The Brown family of Wintonbury parish in Windsor, now the town of Bloomfield, made bass, snare, and toy drums from around 1809 into the 1850s. Brown drums are well-known to collectors, scholars, and drum corps members. Residents of Bloomfield, CT, are familiar with the drums because a drum and sticks grace many of their street signs, and the town square has a bronze statue honoring these industrious residents. Many museums and drum corps own Brown drums, but until last month, the Windsor Historical Society did not possess one, missing a key piece of Windsor’s manufacturing story.

In November, the Society purchased a snare drum in excellent condition, with a printed label on the inside that reads: “William Brown, Drum Manufacturer; has constantly for sale, bass and snare drums, made in the neatest and best manner. –Also – Toy drums of every description. Windsor, (Conn.) 182[5] No. [712].” Visible through the vent hole, this label proves that the Browns made the drum in Wintonbury, which was a district of Windsor until it became the town of Bloomfield in 1835. While Brown drums are not necessarily scarce, finding one in good condition that was made prior to 1835, when the Browns were still technically in Windsor, has taken many years.

William Brown (1802–1825), the son of Benjamin Brown, Jr. (d. 1840), married Thirza Griswold in 1823. She was from Simsbury, and the young couple lived in her hometown. However, the 1824 Grand List for Windsor lists William as a non-resident tax payer of Wintonbury parish living in Simsbury. He owned 11 acres of land in Wintonbury that year and that is probably where his family’s drum making business took place. William died in 1825, and his probate inventory includes a large amount of drum making equipment that might have been housed in Wintonbury. 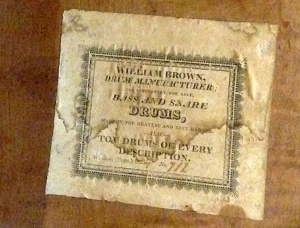 The drum that the Society purchased this year has been in the Coe family for around 150 years and maybe longer. Originally from Madison, CT, their ancestor Dwight B. Coe (1857–1935) was the leader of the Madison Band in the late 1800s and likely used this drum during parades and performances. Two generations later, Adelbert Coe (1913–1992), first of Madison, then of Windsor, treasured the drum and other historic objects, and spent years photographing Windsor’s architectural history. Because the family sold the drum to the Windsor Historical Society, it is now part of the town’s shared heritage and is on view in the Society’s Windsor history exhibit. Come see this new acquisition to our collection and learn about Windsor’s other major industries.