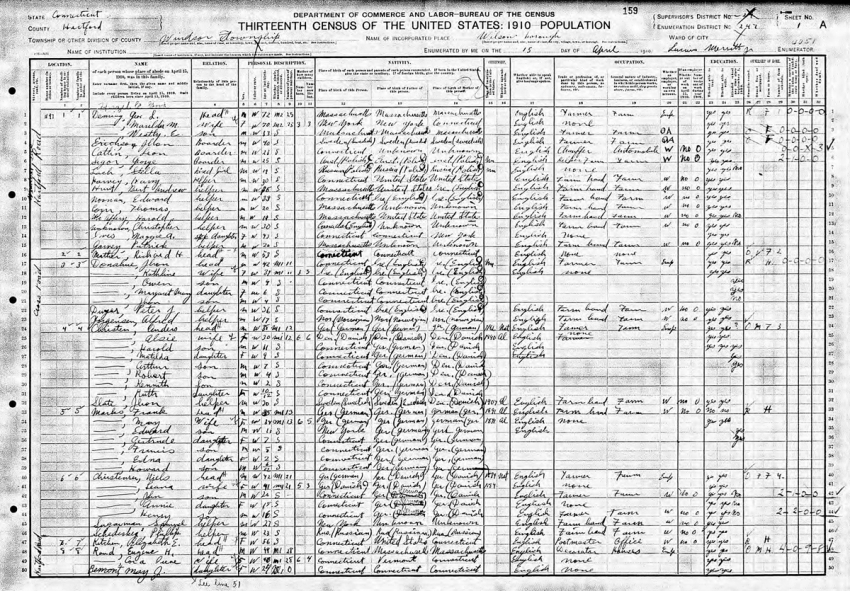 This year [2010] the federal government marks its twenty-third decennial tradition of counting the human inhabitants of the United States. In fact, it’s more than a tradition; it was written into the United States Constitution: Article one, Section two. The first federal census was taken in 1790, in which the total population was counted at just fewer than 4 million people. Before then, some states or individual towns required their own count.

In February 1782, Governor Jonathan Trumbull called for the first state-wide census of Connecticut. Copies of Windsor’s census are located in the Society’s research library and list the town’s population at 2,382. At this time the state was interested in a few statistics: the number of white males over the age of 50; white males between the ages of 16 and 49; white males under 16; number of females; number of male and female Native Americans, blacks, and mulattoes. The town was organized regionally between the First Society, Wintonbury, Poquonock, and North Windsor. The total report took up only half of a piece of paper. 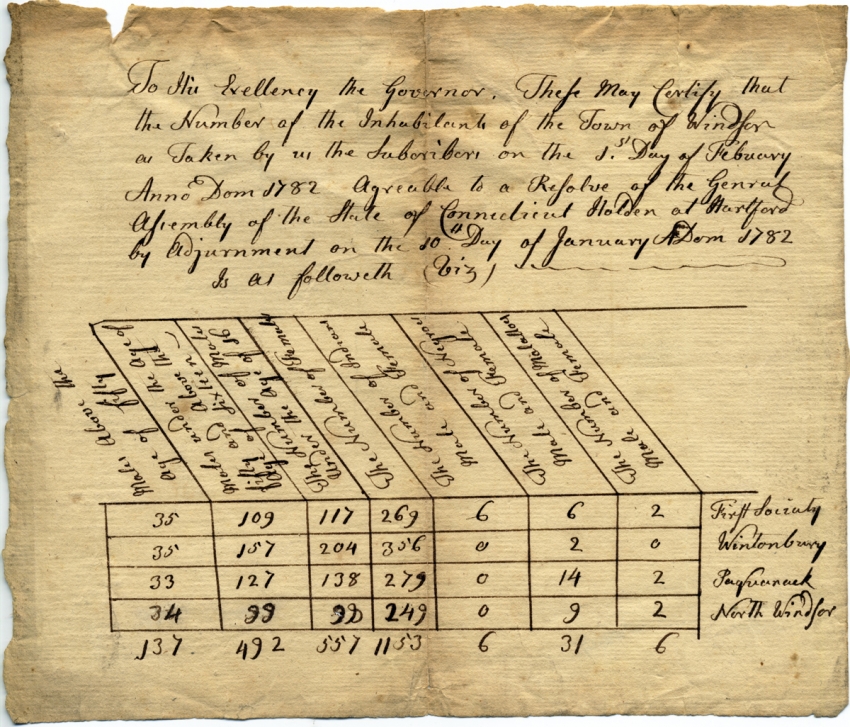 On the federal level, the main purpose of collecting this data is to distribute congressional seats, electoral votes and appropriate funding. However, historians and genealogists have found census information to be of critical importance in researching a town’s or family’s history. To mark this important event, we thought we would take a look back one hundred years to the 1910 census and share some of the information we found about our town.

That year, the Census Bureau hired 70,000 temporary enumerators and supervisors to manually count, record, tabulate and publish the data. This cost the federal government over $10,000,000 and two years’ work. To apply to be an enumerator, applicants had to “be citizens of the United States, between the ages of 20 and 60, in good health and physical ability to perform required duty, of good character and habits,” have two recommendations and pass a test, all to be placed on a list of acceptable candidates. From that list, the State Supervisor and Yale Professor William Bailey selected his team. Enumerators were assigned districts, ideally within their own communities, with roughly 2,000 inhabitants. Each inhabitant recorded earned the enumerator between two and four cents, while each farm recorded earned them between twenty and thirty cents.

In 1910, two enumerators were assigned to Windsor. Reverend William Cary and Lucius Merritt, Jr., of Windsor scaled the town, knocked on doors, and searched out neighbors to record 4,174 names. William, the church clerk at First Church in Windsor was 68 when he worked as an enumerator in 1910, eight years older than the age limit for workers at that time. His position in the community and, no doubt, a long list of references helped his employers overlook that issue. In fact, his position in the church and his familiarity with the community probably made him an ideal candidate for the job. In addition to his church work, William was involved with the Windsor Village Improvement Society and the Hartford Central Association, an organization of ministers from the Hartford area. He appears again in the 1920 census, this time on the list of employees and prisoners at the Wethersfield State Prison where he served as chaplain.

Lucius Merritt, Jr., was 21 years old and a college student when he applied for the enumerator position with the Census Bureau. Lucius, his new wife Sarah, and their newborn son (recorded as 0/12 months old in the census) lived with Sarah’s parents, George and Mary Hyde on Loomis Avenue, a living arrangement that was relatively common. In the 1920 census, Lucius appeared in Northampton, MA where he’d moved with his wife and seven children after securing a job as a principal for one of the public schools.

William and Lucius hand wrote the records of 4,174 individuals in town over 96 census pages. In several instances, information was not listed or was illegible so these figures should be taken as approximates. Windsor had 2,092 women and 2,086 men. Racially the town was divided between 3,992 white, 166 black, and 14 mulatto residents. While every resident’s age was recorded, I divided them into four age groups for easier calculation:

New to the 1910 census was a question for women regarding childbirth, specifically the number of children born versus the number still alive. While this information provides a clear link between birth and death rates in the country, the sensitivity of the question presumably made it difficult to answer. Windsor women had given birth to 2,727 children, of which only 2,114 were still alive at the time of the census. In addition, men and women were asked the number of times married but only the years comprising their last marriage were recorded. This question could raise eyebrows, particularly when women had children born over the course of several marriages. Windsor individuals’ marital status revealed the following:

While it might seem unusual that the married count carries an odd number, I found several instances where a single married man or woman lived with their parents or in-laws and did not list information about their significant other.

In the figures  above and below, I have tabulated the birth place for all Windsor residents. The first figure shows all residents born within the United States. In several instances, the enumerators recorded “United States” where boarders were living. Most likely the person answering the questions did not know where their boarder was born or the boarder was an orphan and unaware of their birthplace. The second figure shows the country recorded for residents who were born outside of the United States.

It should come as no surprise that agriculture and mill work led the list of Windsor industries for men and women during the 1910 census. There were 1,537 women who were over the age of 14; 78% of them were mothers and homemakers or listed no employment. Of the 300 women who listed an employment, 33% of them worked in the mills, while another 20% worked for private families as a cook, servant, laundress, or housekeeper, usually residing in the house in which they worked. Women sought additional work as bookkeepers and clerks, public school teachers, artists, home decorators or worked on family farms.

Most of the 1,559 men who were over the age of 14 had some type of employment, only 9% recorded “none”. Thirty-two percent worked in agriculture, whether that was in or on tobacco farms, tobacco warehouses, general farms, or markets. Another 10% worked for machine shops, 9% worked in the mills, and other fields were distributed between brick making, livery stables, carpenters/painters, electrical, odd jobs, and others.

Due to the success and usefulness of the trolley system between Windsor’s villages and downtown Hartford, men also found work in the city at insurance companies, or did factory work at Underwood Typewriter, automobile manufacturing companies, and Colt Arms Manufacturing.

The information presented here is only a fraction of what can be culled from a census. At the Society, we often look towards the census records of the town and state to fill in blanks that are missing from the published histories of Windsor. The Society has the town’s federal censuses available in the research library. You can access them through HeritageQuest on ResearchItCT.org/genealogy using your Connecticut town library card number.