The year 1963 stands as a landmark period in the American Civil Rights Movement. In the spring of that year, Dr. Martin Luther King Jr. and the Southern Christian Leadership Conference’s campaign against segregation in Birmingham, Alabama drew the focus of the country and world to the issues of racism and segregation in the United States. In the following months, protests erupted in over a hundred cities all over the country, culminating in the famous March on Washington for Jobs and Freedom on August 28th. While the Civil Rights Movement is best remembered for its public stands against legal segregation in the southern states, its efforts also extended into northern states, where segregation and prejudicial treatment remained widespread in housing, employment, and other facets of society.

One of the many civil rights protests that occurred during the summer of 1963 took place just north of the Windsor-Hartford town line at what was then the popular Carville’s Restaurant and Motor Inn on Windsor Ave. The protest was part of a larger effort by Hartford’s newly formed North End Community Action Project (NECAP), which galvanized local civil rights leaders to take a more confrontational approach towards publicizing and solving greater Hartford’s racial issues.

The North End Community Action Project represented a new, more direct approach for civil rights advocacy in and around Hartford. It was an activist organization formed at the beginning of 1963 and was loosely associated with the Hartford chapter of the Northern Student Movement and the Hartford branch of the Congress of Racial Equality. It was comprised of members from both within and outside of Hartford and led by revered local civil rights leaders, including Reverend Richard Battles, Louis Steadwell, Blanton Hall, and James Rogers. While prior civil rights advocates had led some marches in Hartford during the 1950s, they tended to favor negotiation over direct confrontation. NECAP, on the other hand, sought out public attention through non-violent protests, mimicking the strategies espoused and employed by Dr. King.

In July of 1963, NECAP planned a series of demonstrations that would begin in Windsor at Carville’s Restaurant and continue in Hartford at the Terry Square Diner and other businesses. NECAP demanded the restaurants hire black employees in public-facing positions outside of their kitchens. First, they preemptively met with the managers of these restaurants, urging them to hire more black employees. Then the first kneel-in took place on July 12th, at Carville’s. 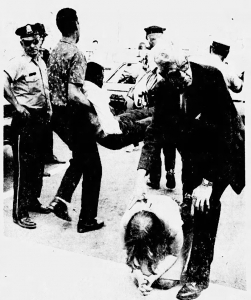 Windsor Police Chief Arthur Wall holds a protester’s back as others are arrested in front of Carville’s Restaurant. | Photo by Arman G. Hatsian. Copyright © 2021. Hartford Courant. Used with permission.

The Hartford Courant reported a diverse crowd of about 50 civil rights demonstrators joined in a picket line outside the restaurant for almost five hours. At 6 PM five protesters left the picket line and kneeled at the entrance of the restaurant, blocking it. After warning them that they would be arrested, police began to pick them up off the ground and carry them to police cruisers. In total, Windsor police arrested 13 of the demonstrators for breach of peace.

The article published by the Courant was accompanied by a large photo showing Windsor Police Chief Arthur Wall standing beside officers as they carried these protestors away from the restaurant. This was the kind of media attention that NECAP hoped to attract to pressure businesses like Carville’s into accepting their demands.

The visibility of NECAP’s first protest had an immediate and profound effect on the regional community. By the following day, Carville’s owner, Henry Carville, had agreed to hire two black employees in visible positions within ten days and an additional four within thirty days. NECAP agreed to assist in finding qualified candidates for the positions. NECAP filed charges against the Windsor Police for brutality during the arrests of the protestors. Over the course of the weekend NECAP succeeded in its negotiations with the Terry Square Diner, whose owners were likely encouraged to avoid a similar incident at their establishment. Within days both Terry Square and Carville’s hired black employees, though almost all at Terry Square were employed for less than a week.

Reactions to the Protests

Over the following week Rev. Battles even managed to gain the support of A.D. King, Dr. Martin Luther King Jr.’s younger brother, who, while in Hartford to raise funds for the March on Washington, spoke publicly in support of NECAP and marched with the group. At press conferences the organization expressed their continued intention to protest any businesses that would not hire black employees in visible positions, emphasizing that “a peaceful picket or demonstration used to arouse the conscience and concern of the public concerning the problems of the North End community is by no means illegal.”

At one press conference, NECAP spokesman James Rogers expressed the organizations intention of also leading boycotts stating, “It is my  personal feeling that if the owner of City Cab Service does not want to hire Negroes, then we should avoid using City Cab.” The charges against those arrested at Carville’s protest were eventually dropped. Over the course of the summer of 1963, NECAP and other local civil rights organizations continued to hold public demonstrations, passionately participating in one of the most active periods of the national civil rights movement.

Not everyone had positive reactions to NECAP’s protests. Some in the public and legal community argued that NECAP’s pickets were illegal. Even some of those in favor of civil rights advocacy criticized the organization’s public approach. In a retrospective editorial published in the Hartford Times, reporter Don O. Noel wrote that the group was “badly organized” and “incompetently managed”. He also claimed that prior to the protest, Carville’s had quietly agreed to hire black employees at its lunch counter and labeled NECAP’s protest as “probably unnecessary”. During his visit to Hartford, A.D. King noted that a certain portion of the black community did not support NECAP, describing this minority of non-supporters as “sick” and to be felt sorry for. As with almost all civil rights demonstrations, there were those who decried the protests, claiming that the demands for change were too radical and the public displays too disruptive to the public order. 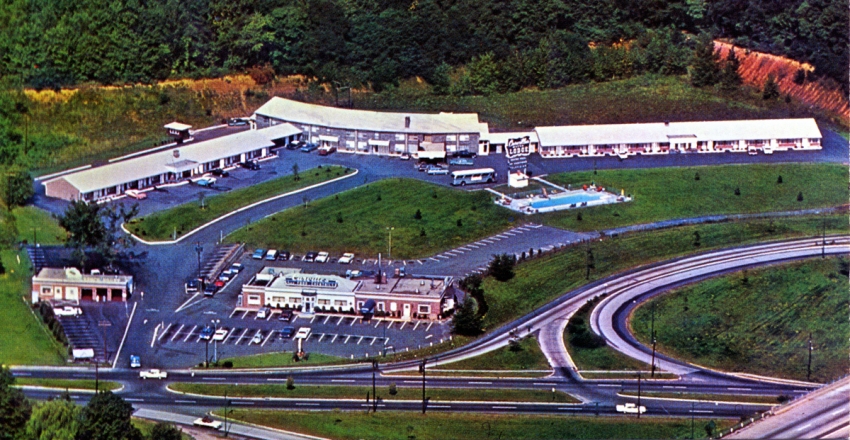 A Locus for Civil Rights

Carville’s civil rights legacy did not end with the protest in 1963. Twenty years later, black owners Rufus and Janice Wells and John E. Williams purchased Carville’s and reopened it under the name Wilson Place. By the following year it had become a popular host for social and political events, including a fundraiser and press conference for Democratic presidential candidate Jesse Jackson’s campaign.

For a period, Carville’s was transformed into a beacon of pride for the surrounding black community. By the 1990s, the building that had served as the casual lunch counter of the Motor Inn and Restaurant had split off into a separately owned restaurant known as Carville’s Ranch House. The motor inn last operated under the name The Flamingo Inn before being demolished, leaving The Ranch House, which still features a Carville’s era sign and serves classic fast food, as all that remains at the location.

It is likely that few who visit or drive by these days are aware of the civil rights protest that occurred there in the summer of 1963.

If you or anyone you know was involved in the protest or has an experience relating to it, we would love to share your story! You can reach out to us by email at mtom@windsorhistoricalsociety.org or by phone at 860.688.3813. We’d appreciate any information you can provide!