A Great Wind Through Windsor: The 1938 Hurricane

It came unexpectedly while people were picking apples, preparing dinner, coming home from school, and tending Windsor’s tobacco crop. September 21st, 2018 marked the 80th anniversary of the Great Hurricane of 1938 that struck Windsor and New England for two hours late on a Wednesday afternoon. The science of hurricane prediction was still in its infancy and New England was caught by surprise. Though only one person died in Windsor as a result of the storm, local newspapers described how others found themselves in critical situations. Thirty-six-year-old Bertha Dumais of Wilson Avenue died of a heart attack during a discussion with her sixteen-year-old daughter, and ten tobacco workers were marooned in a blown-down tobacco shed in the North Meadows. One of the men swam half a mile through flood waters, secured a boat, and returned to rescue his fellow workers. 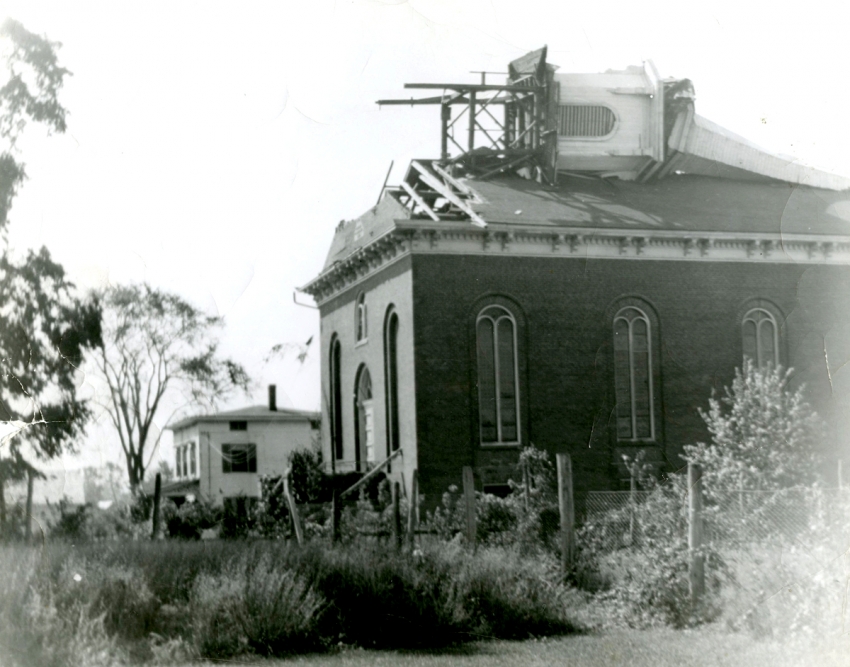 Windsor resident Richard Anderson (1914-2000) wrote in a memoir that “the landscape had taken on an unnatural color, and it was ominously quiet. There was no birdsong.” The wind arrived first and then the rain, blowing it so hard it seeped under the window sashes and ran down the dining and living room walls at 225 Palisado Avenue. An elm crashed into the ell at the back of the house “with a sickening thud” and “crushed it flat.” Thereafter, family meals were cooked in a makeshift fireplace. Town wide the electricity was out for days and telephone service was discontinued, forcing Windsor back to a time when candles were a fact of life. 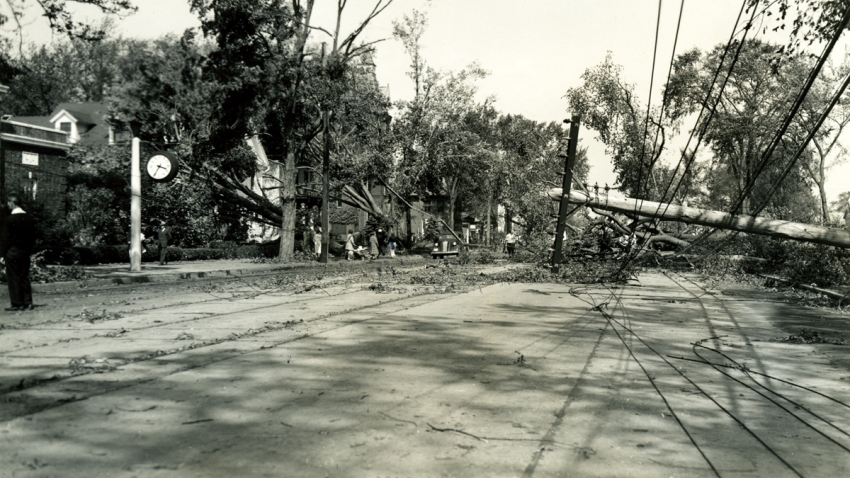 In the days preceding the hurricane, 11.47 inches of rain saturated the ground. When the 80-to-100 mph winds arrived, they quickly dismembered the town green of its elms, maples, and beloved Christmas tree. In all, twenty trees fell down on the green, blocking travel on Windsor’s main thoroughfare. Fortunately, the Windsor Club quickly organized a committee to raise funds and purchased 25 mid-size elms and maples to restore order to one of New England’s more picturesque centers. 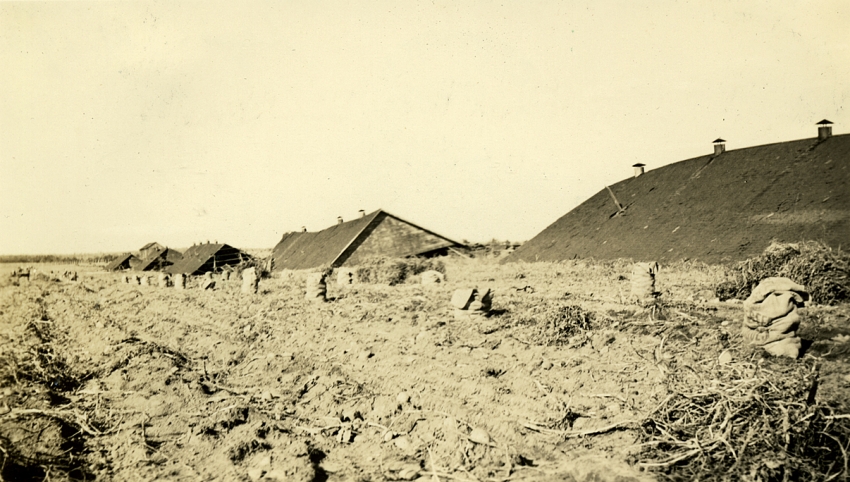 Five tobacco sheds in a row were felled by the storm. WHS collections 2014.33.1, gift of Jane Zajac, from a scrapbook kept by her mother, Louise Albro Miller Woods.

The tobacco fields had been harvested and the fragrant leaves were hanging in the sheds to dry before going to market when the winds started. The winds picked up the sheds and smashed them to the ground, destroying the tender leaves inside. If charcoal burners had been set up to hasten drying the leaves, the collapsed sheds caught fire. Firefighters couldn’t reach the sheds because all roads were obstructed with downed trees. At Thrall’s Plantation in Poquonock, Frazier Carithers, age 44, and James Quagliaroli were pinned in a collapsed shed for several hours before they could be rescued and driven to Hartford Hospital. The ride took two hours due to road obstructions while on a normal day it would have taken 20 minutes.

The storm devastated families who were solely dependent on their tobacco crop. In 2008, a then- 80-year-old woman described her family’s sad experience: the winds destroyed their shed full of tobacco, the sale of which would have paid their mortgage and bought food and shoes for eight children. With the loss of the crop, they were forced to declare bankruptcy, lost their home and livelihood, and their father suffered a nervous breakdown. 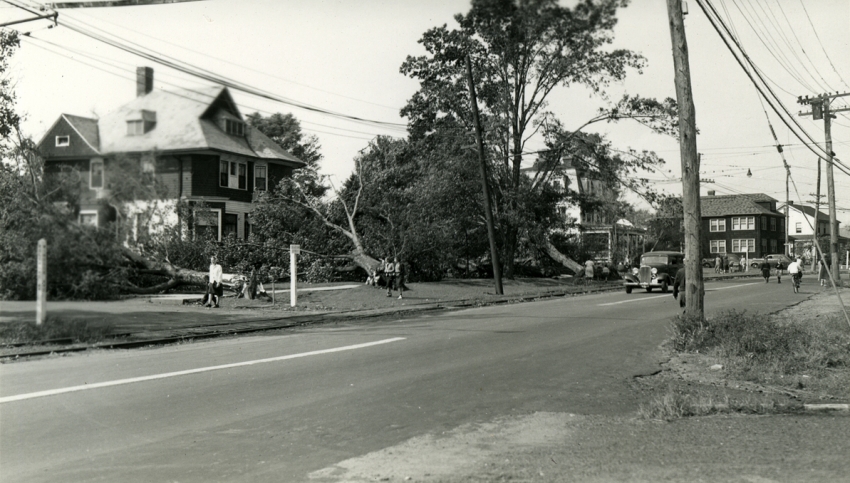 Surprisingly, only the Poquonock, Griffin, and Deerfield schools closed. The Roger Wolcott School had trees fall against it and window glass blown out. Wednesday was the first day of school for the Loomis Institute, which found itself surrounded by water by the end of the day and transformed into “the Island.” At the much-anticipated VFW carnival on Windsor Avenue, the storm blew down the tents and “toppled the ferris wheel, leaving it a mass of twisted iron girders.” The Windsor Historical Society had its annual meeting on the town’s founding date, September 26, five days after the hurricane. The Society’s members found themselves moving from one location to another until they finally sat themselves at Judge Alfred Olds’ home on Stony Hill. Baseball games, harvest suppers, bridge and tea parties—all canceled.

And Then the Floods Came 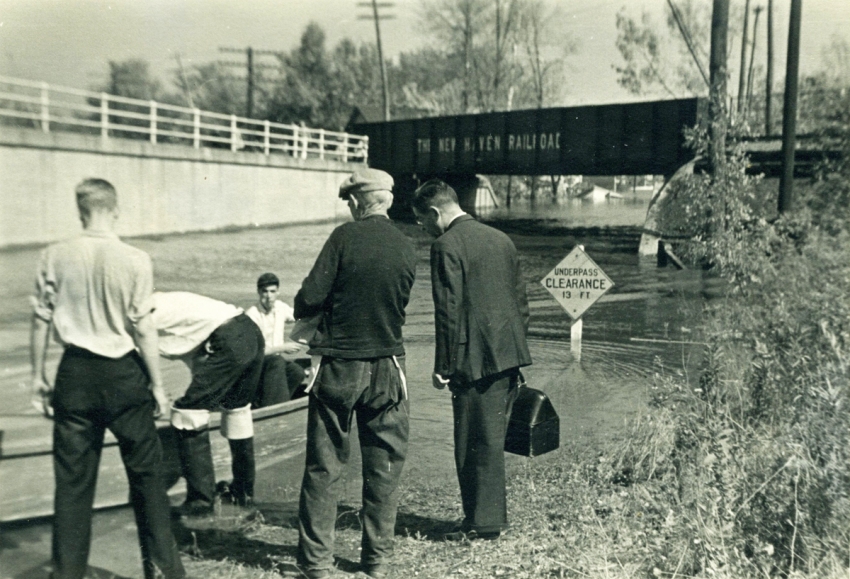 After the wind and rain, the Connecticut and Farmington Rivers, already swollen with the week’s rainfall, rose alarmingly. By Friday night the Connecticut crested at 35.1 feet, and for four days the river was impassable on any bridge. Streets already blocked with fallen trees were soon covered with swift-moving, brown flood water, filling cellars and flushing out rabbits and rats struggling for higher ground. Vegetable market gardens in the low-lying village of Wilson were washed down the Connecticut River. Cellars in Wilson were filled to the first floor, displacing 25 families. Four families in Windsor Center were flooded out and eight more in Poquonock. The local Red Cross chapter started a Flood Relief Fund for displaced Windsor citizens, and Town Hall became hurricane headquarters.

When the Farmington River receded, it left a seven-foot breach in the train roadbed between the Windsor Center depot and the Farmington River railroad bridge. A crew worked on it for two days without relief, shoveling railroad carloads of trap rock into the hole. Trolleys, which required electricity to run, were temporarily discontinued and replaced with buses. Mary citizens found they preferred bus travel and began advocating for more commuter buses to Hartford, for the discontinuation of trolleys, and for wider, safer roadways.

On a Positive Note

This 1938 hurricane and the 1936 flood were miseries that added to the nation’s economic troubles known as the Great Depression. Earlier in the decade President Franklin Roosevelt had put thousands of jobless Americans to work with his WPA program as well as young men in the Civilian Conservation Corps. Now, the town and private citizens paid many of these workers wages to clean cellars, clear away downed trees, and reset sidewalks. The Blizzard of 1888 visited Windsor 50 years before and the Flood of 1936 two years previous, both of which tested our town government’s preparations for large-scale disasters. Though this Storm of the Century hit with a mighty blast, Windsor’s citizens quickly responded to the community’s needs and set wrongs to rights again.